David LePoire
Years ago I enjoyed the wandering of James Burke in his Connections and Dya the Universe Changed books and documentaries. There seemed to be a chain of people involved with development of the many historical scientific and technological discoveries. This prompted me to is investigate whether there might be connections throughout history between myself and and these figures. This would be somewhat similar to the Kevin Bacon parlor game to identify an actor's connection to Kevin Bacon by a string of their movies. There is also a mathematical genealogical website listing the advisers and students through modern history in mathematics doctoral studies. But what would be considered a connection.

One way is to visit places they visited like Independence Hall or Mount Vernon, or Valley Forge. Another way to connect might be through a chain of people who interacted with each other, for example, a handshake or being at Valley Forge when Washington was there. It is difficult to know all the people a given person met, however, there are significant documented meetings that might suffice to demonstrate at least one chain of connection.

So how long of a chain do you think it takes to connect this way to a historical figure, for example, George Washington or a scientist like Galileo? So let's start with the George Washington example. I'll work backward. I had met Bill Clinton in the fall of 1991 when he visited Chicago to meet the politicians that might support his candidacy for president. I had been called in the afternoon that day and invited to come since I had worked the suburban registration and get-out-the-vote. Bill Clinton was late (meeting the more important Mayor Daley of Chicago) so while we waited in a skyscraper in downtown Chicago in a small meeting room around a table, his wife Hillary came to talk with us. Later I shook hands with Bill Clinton, thinking at the time that he did not have even a small chance of reaching his goal. 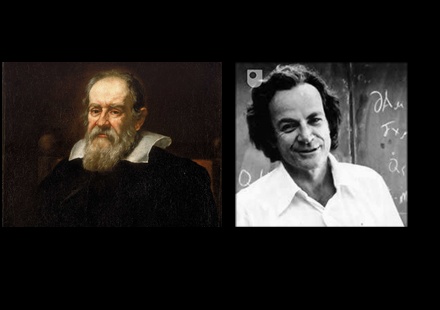 But he made it and in the news stories leading up to the election, a photo was circulated with Clinton meeting then President Kennedy as part of a large scholar group. The archives of Kennedy have a letter stating that Jack Kennedy had visited the White House with his ambassador father and had been surprised to see the physical condition of President Franklin Roosevelt. FDR had married a distant cousin of the Oyster Bay Roosevelt's which included Teddy Roosevelt who had been at their wedding. There is a photo of a very young TR looking out the window as the casket of Abraham Lincoln passed by in New York City. This does not count as a meeting but TR's father had been good fiends with Lincoln. So far there are 2 people between myself and FDR (Clinton and JFK) and a further two between FDR and Lincoln, making a chain of 5 between myself and Lincoln. You might think this would continue with a chain of presidents, and possibly it could, but there is someone who makes the connection much shorter- General Winfield Scott who sat down early in his career with Thomas Jefferson and later would serve in the Lincoln administration (the longest serving general in U.S. Army history). Thomas Jefferson of course knew all the founding fathers, including George Washington, through his writing of the Declaration of Independence. So the total is 8 people between myself and George Washington (Clinton, JFK, FDR, TR, TR's dad, Lincoln, Scott, Jefferson), not bad for a 240 year connection chain which averages out to about 30 years per connection.

Some of the leaders (Churchill and Stalin) during WWII will be just one more than the FDR connection which is two. The connection to Hitler is a bit surprising since it goes through a secretary, preacher, and scientist, specifically my work secretary that marched with Martin Luther King in Chicago. King had also met the rocket scientist Wernher von Braun who had met Hitler when discussing his V-1 and V-2 rocket projects. The connection to Mao is even closer (2), as I have met both Hillary Clinton and Barack Obama who both met Henry Kissinger, who met Mao. The Hirohito connection might go through FDR and MacArthur (3) but there is a closer one (2) since my dad met Ronald Reagan while working for GE and Reagan did commercials for them. Reagan met Hirohito in 1983.

Science connections are not as well documented as political meetings. However, I volunteered for the crew for CalTech's plays in the early 1980's. For South Pacific, I waited to go onstage with Richard Feynman who played the Bongos as a South Pacific chieftain on while I changed the set (coincidentally the author of South Pacific, my favorite author, James Michener, was the later the commencement speaker at my graduation.) Feynman was a leading physicist, having won the Nobel Prize and worked on the Manhattan project at Los Alamos. One of his advisers was Albert Einstein (1879-1955), who met many of the great physicists including the group at the Solvay Conferences in the 1920's.

One person there was Ernest Rutherford (1871-1937), who was born in New Zealand, did his Nobel Prize winning work while in Canada, and did his most famous experiment in England. At one of his presentations was William Thompson, i.e., Lord Kelvin (1824-1907). While Lord Kelvin played a fundamental role in developing thermodynamics (honored by having the Kelvin temperature scale named after him), he was knighted for his work in developing the transatlantic telegraph. An 1847 presentation by James Joule (1818-1889) inspired William Thompson (before he was knighted). Also in the audience was Michael Faraday (1791-1867) who would later inspire the theoretical unification of electricity and magnetism by James Maxwell (1831-1879). (They met at some of the Royal Institutions lectures.)

Faraday had gotten his start under Humphry Davy (1778-1829), who among other things explored the use of nitrous oxide (laughing gas) as a potential anesthetic for medical procedures. James Watt (1736-1819) was in Bristol at the same time as Davy and helped develop a gas container as they “experimented” with laughing gas. Watt had been previously in a group (1757) that included Joseph Black (1728-1799) and Adam Smith in Glasgow. Black had done original experiments with latent heat and magnetism and was an early financier of Watt’s steam engine and was friends with John Robison (1739-1805), who also worked with Watt.

John Robison had also been involved to test mechanical clocks at sea contest to develop a clock to solve the longitudinal problem at sea. In his capacity he met John Harrison (1693-1776) who was partially financially supported by another clockmaker, George Graham (1673-1751). Graham was interested in astronomy also and made a sophisticated quadrant for Edmund Halley (1656-1742) for the Greenwich Observatory.

Halley had been instrumental in recognizing the genius of Isaac Newton (1643-1727) and encouraging him to publish his results including financing the publication of Newton's most famous work the Principia. Newton had met the Dutch physicist Christiaan Huygens (1629-1695), whose father Constantijn Huygens (1596-1687) was a Dutch diplomat who was friends with Galileo (1564-1642) and also Descartes.

The sequence from Richard Feynman to Galileo has 16 people, with their contributions in a variety of fields such as quantum electrodynamics, general relativity, nuclear physics, thermodynamics, electromagnetism, chemistry, steam power, mechanical clocks, gravitation, optics, and classical mechanics.

So what are your connections? Do you see a shorter or more interesting path? What about to other fields such as business, music, sports, and entertainment?