Alex "Sandy" Antunes
In the movies, aliens and evil empires want to kill us.  Despite their advanced technology, they end up landing ground troops to do so.  Worse, the forces of evil-- alien or human-- tend to be lousy shots.  How unrealistic is this?

1) Aliens who come to earth want to kill us.

This isn't unreasonable. "Hawking's Conclusion" is that aliens are hostile, "looking to conquer and colonise whatever planets they can reach".

Reaching into SF movies, though, not all aliens are evil world-conquerors.  The exception is the lone exploring alien, who is befuddled by our odd ways.  My conclusion?  The befuddled one just doesn't understand us enough to know why he should be trying to kill us.  Once he understands, he reverts to being a type 1 Conqueror.  Discrepancy solved.

Alien invaders cruise up in their ultrafast ships, blow up our cities with super death beams, then... park in orbit and send in ground troops?

Turns out that's the only viable way to occupy a planet.  No matter how much destruction you rain down, the cockroaches and action heroes will somehow survive.  You have to land and squish them manually, and that means alien soldiers landing and going building-to-building to finish the job.

Example: every war of occupation since the Seige of Troy (at the very least).  Also, the recent assault on Bin Laden showed how effective a small team of soldiers can be for a targeted goal, compared with many dollars more worth of munitions dropped from afar.

No matter what tech, you need boots on the ground.

It turns out they're not lousy shots because they're evil, they're lousy shots because they fight under outdated paradigms and receive poor training due to cultural needs that emphasize obedience over initiative.  Put simply: if policy is 'strangle the one who dares challenge the leader's plan', your military flexibility suffers.

If the villains are sending massed lines of troops who stand in a row to fire, they're stuck in 1st generation warfare (as per Lind's generations). Proud of their shiny armor, military is clearly superior to civilians, you march in a line and get mowed down and are proud of it!  It makes sense their troops can't hit.  That's why they have to stand in a line and fire-- it's the only way to get enough laser fire to have a chance of taking down the target.

I'll grant some evil forces might be 2nd generation: artillery clears things out so the infantry can occupy.  It is still focused on "rules, processes and procedures. Obedience was more important than initiative (in fact, initiative was not wanted, because it endangered synchronization), and discipline was top-down and imposed" (Lind again).

Now doesn't that describe everything from Ming the Merciless and the Star Wars Empire, up to hive races and alien queens? 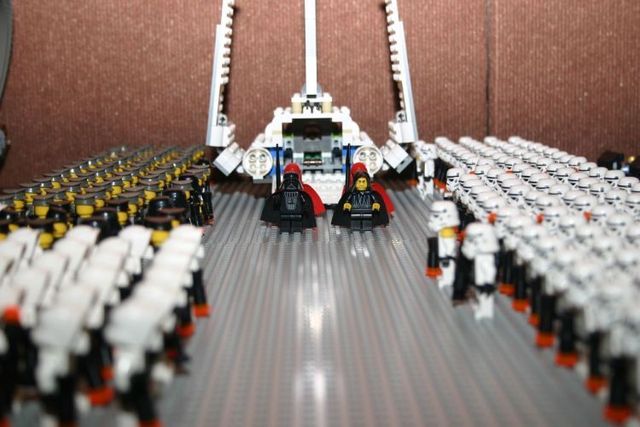 If evil fights in smaller units, they are using 4th generation warfare tactics, so even then they can be excused for being poor shots.  Their goal isn't to hit the target, it's to provide suppressive fire so their specialists can do the dirty work.

Where's the specialists-- their alien equivalent of a sniper or grenade-launching rifleman?  That's a good point.  Evil forces rarely seem to provide a training budget, though, so perhaps they're just understaffed and waiting for the specialist(s), a sort of 'Waiting for Vader' syndrome.

In all cases, they haven't moved to the sort of tactics needed to root out those plucky Earthlings, Jedi, or rogue operatives.  So we win, every time...

... until the aliens read this article and mend their ways, that is.