A single figure graces the pages of Charles Darwin's groundbreaking work On the Origin of Species, first published in 1859. The figure in question depicts a tree-like sequence of branchings through time as hypothetical lineages diverge and new species arise. To be sure, the metaphor of a tree was important in Darwin's thinking about the history of life. He wrote in the Origin,

As buds give rise by growth to fresh buds, and these, if vigorous, branch out and overtop on all sides many a feebler branch, so by generation I believe it has been with the great Tree of Life, which fills with its dead and broken branches the crust of the earth, and covers the surface with its ever-branching and beautiful ramifications. 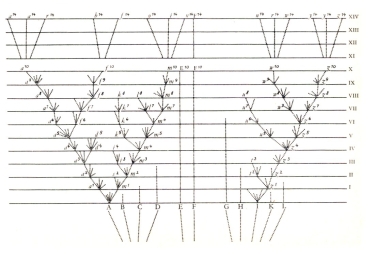 The tree diagram in On the Origin of Species

Evolutionary biology has changed considerably over the past 150 years, but the concept of a tree of life remains central. An entire field, phylogenetics (Gr. phyle, tribe + genesis, birth), has arisen whose focus is on hypothesizing evolutionary relationships as reflected by branching tree diagrams. The resulting phylogenetic trees, as Baum et al. (2005) recently noted, "are the most direct representation of the principle of common ancestry—the very core of evolutionary theory—and thus they must find a more prominent place in the general public’s understanding of evolution.”

Unfortunately, when it comes to interpreting evolutionary trees and the relationships that they represent, misconceptions are widespread. This post marks the first in a series on evolutionary trees and the information that they do and do not convey, presented in honor of Darwin Day 2008. These are adapted from a forthcoming article in Evolution: Education and Outreach that is now available free of charge in preprint form.

Let us begin with a simple tree depicting hypothesized (and well supported) relationships among major groups of vertebrate animals. In this figure, time extends from bottom to top, with the base of the tree representing a time in the distant past and the "tips" (called "terminal nodes") occupied by contemporary species. Each point at which two branches converge (called "internal nodes") reflects a common ancestor shared by two lineages. Thus, the lineage represented by cats and the one of which humans represent the terminal node are joined by a common ancestor some time in the past (i.e., an extinct ancestral mammal). Lizards and birds also share a common ancestor (i.e., an extinct ancestral reptile), and this lineage joins with the mammalian lineage at an even deeper node representing an ancestor that was shared by all of these amniote lineages. The amniote lineage shares an ancestor with the lineage represented by frogs at a still deeper node, and at the base of this tree (i.e., the deepest internal node, or the "root") is an ancestor shared by all of these vertebrate lineages. 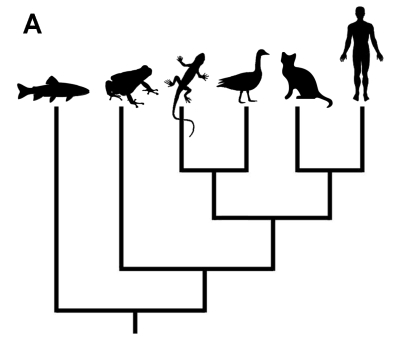 The question is this. In your reading of this tree, which group is the most closely related to fishes: frogs, lizards, birds, cats, or humans?

As Baum et al. (2005) noted, the intuitive response provided by most people is frogs. After all, frogs are closest to fishes on this tree, aren't they?

Consider next the following tree: 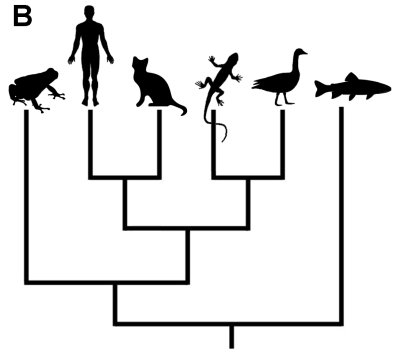 In your view, does this tree depict different relationships? Does it imply that frogs and humans are closer relatives than are humans and reptiles? Is it less accurate than the first diagram?

Think of it this way: you and your sibling are linked through a common ancestor (your parent), and you are both equally related to your cousins (to whom you are all linked through a shared grandparent). 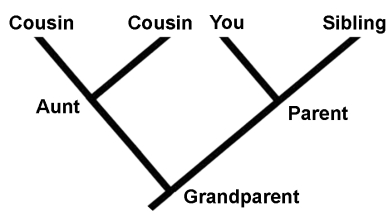 An evolutionary tree is similar in a sense to a baby's mobile: each node can rotate freely without changing the way that they are joined to one another. As such, the order of the terminal nodes is meaningless. One cannot read across the tips.

The relationships depicted in a tree are historical, whereas the terminal nodes represent contemporaneous groups. Whenever you encounter an evolutionary tree, practice rotating a few internal nodes mentally. This is a simple exercise, but it is a powerful method for avoiding a number of common misunderstandings of evolutionary trees.