In the first installment of this series, we encountered the common misconception that the order of the terminal nodes ("tips") on an evolutionary tree reflects the actual relatedness among the species represented. Simply rotating some internal nodes without affecting the branching order ("topology") of the tree -- and thus, making no change to the relationships among species -- showed that that the order of tips on a tree is actually arbitrary. What matters is the way that the species are connected through their common ancestors.

This time, we will deal with misconceptions about the change that actually occurs along the branches in between nodes, especially between an internal node and a terminal node.

Here again is a tree showing relationships among major groups of vertebrates. 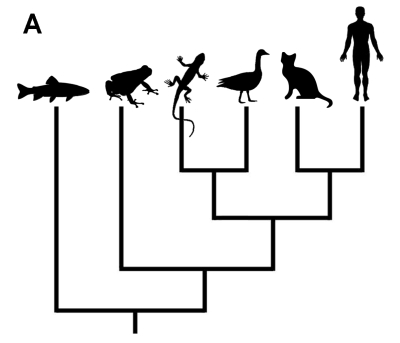 In this case, each terminal node represents a living species and all internal nodes reflect extinct ancestors. Looking at the tree above, there may be a tendency to assume that very little change has occurred in the lineage leading to modern bony fishes, whereas it is clear that a great deal of change has happened in the lineage leading to mammals. But is this an accurate interpretation? Does the long straight line with no branching depicted in the fish lineage mean that no change has occurred in fishes since the split between their lineage and our own? Isn't the outermost branch ("outgroup", or less appropriately "basal lineage") the most "primitive"?

Before answering those questions, consider this tree. It shows hypothesized relationships among the major echinoderm lineages, which includes sea lillies, brittle stars and sea stars, and sea cucumbers and sea urchins. The outgroup in this case is humans. 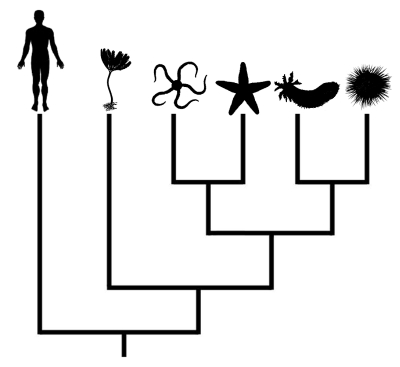 Looking at this tree, would you assume that no change has occurred on the branch leading to humans from the common ancestor of vertebrates and echinoderms? Can you conclude that humans are more "primitive" than sea cucumbers?

There are several reasons that trees like the first one above can be confusing. First, it is an "unbalanced" tree, which means that more diversity is depicted on one side of each internal node, even if this does not reflect reality. As a matter of fact, bony fishes make up about half of all vertebrate species, whereas in the tree above they are represented by only one terminal node as compared to five nodes representing the non-fish vertebrates. Second, there is a tendency to draw conclusions based on the order of terminal nodes, and humans or some other species of interest are usually placed at the far right of the tree (or at the top, depending on the orientation) when, as we saw last time, the order of tips is arbitrary as every node can be rotated. Third, there is an assumption that a long branch means that no change has occurred, a misinterpretation that becomes evident when humans are placed as the "basal lineage" on a tree.

So, not only is it inaccurate to read the order of terminal nodes, it is also not valid to assume that a branch without internal nodes means that no change has happened in that lineage -- more likely, it simply is not depicted as a result of incomplete sampling.

Assuming that no change has occurred even on short branches can also create misunderstandings about evolutionary relationships. For example, consider the following tree, which reflects relationships among several primates. 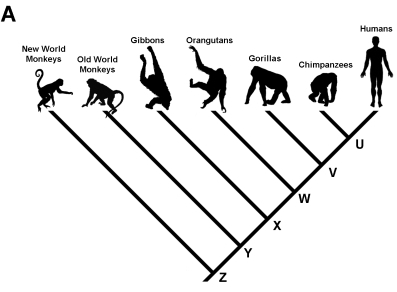 This diagram indicates that humans and chimpanzees are each others' closest living relatives, these two having shared an ancestor (at node U) more recently than either has with any of the other living primates shown in the tree (there are actually two species of chimpanzees, the common chimpanzee Pan troglodytes, and the bonobo, Pan paniscus). The species that is represented by node U was neither a human nor a chimpanzee. In fact, a great deal of change has occurred along the lineage from node U to modern humans, and involved several more ancestors that are not shown on the tree. There was also change along the lineage of which modern chimpanzees are the present representatives. In short, humans are not descended from chimpanzees any more than chimpanzees are descended from humans. Chimpanzees and humans are cousins, and neither is the grandparent of the other.

One often hears the question asked, at least among those who do not understand evolutionary concepts, "If humans are descended from apes, then why are there still apes?". The answer is simple: humans are not descended from other modern apes, rather humans and the other apes are all descended from common ancestors that are extinct. This is possible because new species often arise through a process in which an ancestral species diverges into two or more descendant lineages (a process known as "cladogenesis") rather than simply transforming into a new species (a process called "anagenesis"). Thus, humans and other apes can all exist in the same way that Canada, Australia, and New Zealand can all exist.

To learn more about how, and how not, to interpret trees, see "Understanding evolutionary trees " in the recent issue of Evolution: Education and Outreach, which is free to access online.