T. Ryan Gregory
Today I gave my lecture on mammal diversity and evolution in the 4th year vertebrate course. We have been talking a fair bit about paraphyletic groups, common vs. scientific names, and so on. Within this context, we explored the issue of whether we're "descended from monkeys", by taking a look at a phylogeny of relevant primates: 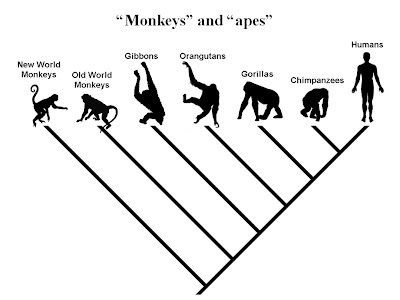 The issues that we noted were:


After class, one of my students emailed me a link to this video, which explores the issues nicely. The author takes a cladistic approach and concludes that we are descended from monkeys for the reasons listed above.


What do you think?
Genomicron
More Articles All Articles
About