The Origins of the Reductionist Program

"How can the events in space and time which take place within the spatialboundary of a living organism be accounted for by physics and chemistry?" Erwin Schrodinger - What is Life - 1944 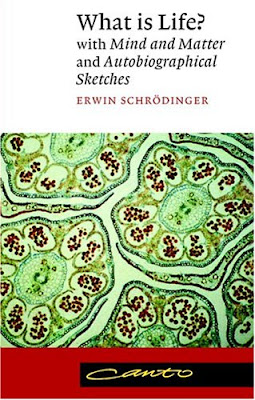 Schrodinger was a Nobel Prize-winning physicist, most cited for his work on wave mechanics, who had the temerity to cross disciplinary boundaries and publish a short text intended for the layperson interested in basic biology and physics. Indeed biologists at the time attacked it on account of its naivete and extreme reductionism.

The book's overriding contention was that all of biology could be reduced into chemical and
physical laws, a statement that most biologists today will agree with. However, back in the day, reductionist beliefs were definitely not in fashion; it was strongly opposed by scientists such as Wigner, Polanyi, Elsasser, and Koestler. There were many holdouts clinging to the edifice of vitalism long after the luminiferous ether and the phlogiston theory faded from scientific relevance.

What is Life? was largely ignored by biologists, but embraced by chemists and physicists. Chargaff, Stent, Benzer, Delbruck, Symonds, Meselson, Watson, Crick, Wilkins, Luria, Appleyard et al. were all lured to cross disciplinary boundaries after reading the text or interacting with those who did.

Schrodinger's book had a very positive effect on me and got me, for the first time, interested in biological problems. ----Maurice Wilkins

On those who came into the subject just after the 1939-1945 war, Schrodinger's little book... seems to have been particularly influential.... Schrodinger's book was very timely and attracted people who might otherwise not have entered biology at all. ----Francis Crick

[After reading WIL], I became polarized towards finding out the secret of the gene. ----James D. Watson

Delbruck first entered my life in the form of a chapter heading ‘Delbruck’s model’ in Schrodinger’s book What is Life? I read that book at an impressionable age, while still a graduate student in solid state physics. ----Seymour Benzer

Schrodinger, then, can be credited with inspiring a generation hell-bent on discovering the nature of the gene, and by 1970, they had largely succeeded. The reductionist program has been taken to its logical extent, delving the depths of molecular biology, the nature of the gene and the biochemical basis of life. Today the reunification of organismal and reductionist biology is well underway, and biology is ever stronger for its conceptual foundations in chemistry and physics.