John Dennehy
Ecological Niche Modeling is a great tool for conservation biology, phylogeography and evolutionary biology. However, as Jeff Lozier and colleagues point out in a paper in the Journal of Biogeography that the models are only as good as the data they are based on.

The basic premise of the ENM approach is to predict the occurrence of species on a landscape from georeferenced site locality data and sets of spatially explicit environmental  data layers that are assumed to correlate with the species’ range.

This is fine if the researchers themselves collect the data, but many studies rely on publicly available online databases. While no doubt the validity of most of this data is unimpeachable, there can be instances of misidentification or poor taxonomy. These discrepancies have the potential to significantly skew the results. 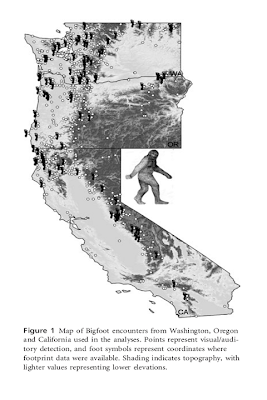 As an extreme example, the authors point to Sasquatch, the North America's purported other large primate. Using data from the Bigfoot Field Researchers Organization, Lozier et al. predict the Sasquatch's range in the Western US (see figure above).

Interestingly, Bigfoot's supposed range overlaps considerably with another large American mammal, Ursus americanus, the Black Bear. Naturally, it is quite possible that the Black Bear and Sasquatch could share similar habitat requirements, but perhaps a more parsimonious hypothesis is that Black Bears are being misidentified as Sasquatch.

Thus, the two ‘species’ do not demonstrate significant niche differentiation with respect to the selected bioclimatic variables. Although it is possible that Sasquatch and U. americanus share such remarkably similar bioclimatic requirements, we nonetheless suspect that many Bigfoot sightings are, in fact, of black bears. The take-home message is that scientists should carefully scrutinize literature records and/or public databases. Validate taxonomy. Rely on recognized experts. Don't be afraid to disregard questionable specimens. Ecological Niche Modeling has a bright future, but like any technique it can be properly or improperly applied. The authors should be commended for their clever approach to pointing out the need for scrutiny.