I received this from my mother this morning.  Looks like my home town is having a little event.  I live a few hours away, so I won't be present. 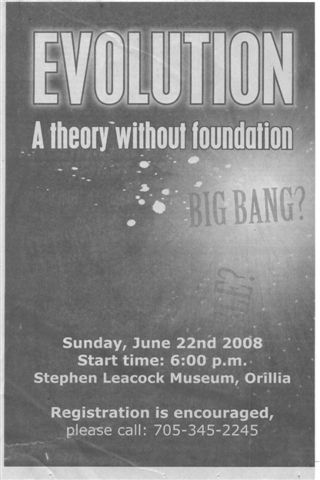 In case it isn't legible, it says:

Charles Darwin first proposed the theory of evolution in his 1859 book "Origin of Species".  He argued that living things adapt genetically over time in order to thrive in their own environment.  His theory also suggested that humans evolved from apes in a slow and random change over a long period of time.  This concept is probably quite familiar to most, if not all of us.  Schools have been teaching the theory of evolution and the controversy over how it is taught in schools has made news headlines.  John West, who is the associate director of the Discovery Institute's Centre for Science and Culture says: "We are not looking at the debate between evolution and intelligent design.  Rather, we are looking at creationism, that is, the creation of all things by God, versus the theory of evolution.  Creationism has a deep-rooted foundation in scripture."  Does the Bible back up Evolution or Creation?  FIND OUT!

I counted at least three major misconceptions.  Anyone comment?