T. Ryan Gregory
I came across this interesting forum on Spore. I hope SpongB6F1 won't mind if I quote this posting at length, as I think it is very insightful.

"Science Spore" would be ideal.

I think many people will claim that although some kind of abstract commitment to science would have been nice in Spore, what they really want is just some decent, engaging and clever gameplay, instead of a rigid pattern of repetitive, simplistic grinding tasks.

But I think these are two very interrelated issues. The gameplay elements that attracted many of us to the game were precisely the "sciencey" parts. Because by science we're not talking about the propounding of abstract theorems or doing calculus problems here--the science parts most of us want are basically just the interesting game mechanics everyone is talking about (e.g. functional consequence to parts placement in Creature, or a more realistic Creature ecosystem and behavior system, or any number of sci-fi features we wanted in Space, etc.).

These are science-related not because of any didactic teaching of facts, but in their basic nature and the mental approach you'd have to take to them. Such as trial and error, experimentation, exploration of the world, problem solving, inducing general principles of how the world works, etc. E.g. figuring out what kinds of creature design would be effective. Figuring out what kinds of creature behaviors and strategies are appropriate for which niche, etc.

So in asking for a "Science Spore," most of us are really asking for a game that actually engages our minds on some level. That's why we play games in the first place.

I am, of course, pleased to see that many others are interested in a game like Spore that incorporates some actual evolution, and that there is even hope that this will arrive in the form of an expansion or sequel someday. But would there be a market? 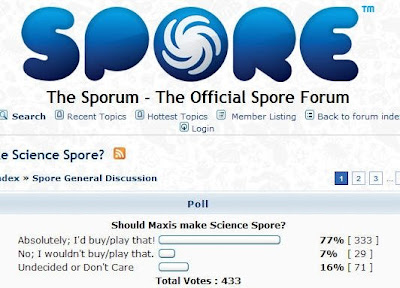