Michael White
The evolution game Spore was somewhat of a critical flop - especially among scientists. The game has glitzy graphics, but, for a game billed as being somehow connected to science, the science sucked.  What's more important, many of us thought the game play could have been improved with better science.
Well, if the Spore guys had gotten together with the creator of Swimbots, (or GenePool - not sure which is the real name) the result might have been amazing graphics, gameplay, and science:

It's a computer simulation where hundreds of virtual organisms evolve swimming skills. These organisms are called "swimbots". You can set mate preference criteria and thus influence what the swimbots consider as attractive qualities in potential mates. The most attractive swimbots get chosen most often to have little babies, and so their genetic building blocks propogate to future generations. Eventually, swimbots get better at pursuing each other, competing for food, and becoming babes to other swimbots. Local gene pools emerge which compete for sex and food (for energy to have more sex). Eventually a dominant sub-population takes over.

Sometimes, everyone just dies. That's not a bug. That's nature! If you want, you can move swimbots and food around to help your favorite critters survive. 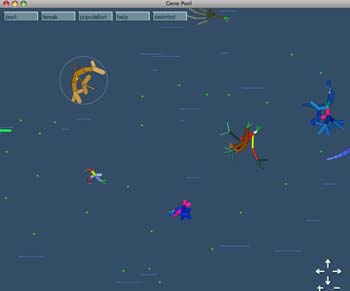