News Staff
Right now, we can play video games and feel like we are 'in the game' but it's still a lot of suspension of disbelief. If you can only see 40 degrees while driving a car in a game that's nowhere close to your peripheral vision in the real world.

Next generation gaming, beyond better graphics, requires establishing new relationships between game progress and entertainment experience. Chess is a much different experience versus another person than it is a computer, as is Poker. Many less experienced people play far more conservatively versus people because computers don't feel real. And then there are some sports where the experience is limited because you aren't very good at them, such as sports. 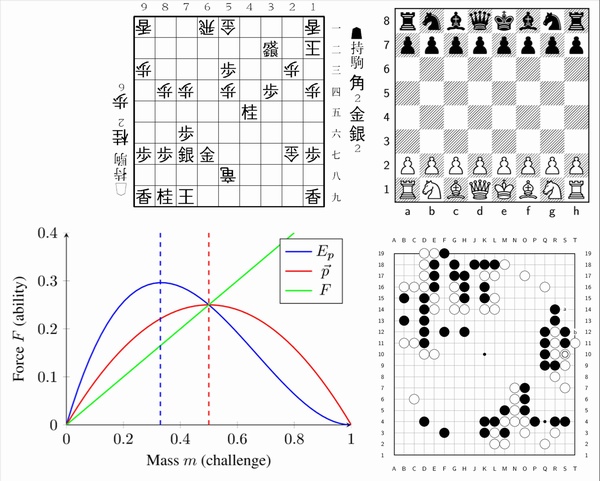 The link between GR theory and Flow theory. The force is normalized over various mass with momentum and potential energy. Such a measure was discovered from the game's underlying mechanisms playing progress of Go, Chess, and Shogi board. Also, acceleration provides a reasonable indicator of the flow state to measure the balance between challenge and ability. The cross point at m=1/2 is vital as a border between competitive and non-game context (education). In contrast, potential energy peak at m=1/3 is prominent in non-game settings (e.g., most engaged)

What if, when playing "Mass Effect", you could feel power in your mind? A new study is a waypoint on the road to true immersion. Researchers established relationships between games and law of motions in mind through analogy of physics and game refinement theory and were able to establish mass, speed, and acceleration relative to the game progress model. That allowed for the player's entertainment experiences for a specific game to be determined through Newtonian laws of motion - Force, Momentum, and Potential Energy.

Studies of everything from board games have to sports to business efforts like product loyalty have found that game refinement measure converges to approximately similar “zone” value - region named as the noble uncertainty.

The fun of games, and therefore a focus in game theory, is the uncertainty of the game outcome. That also impacts the gamified experience so several models have been introduced to fundamentally capture the essence of game playing in a variety of contexts.

Here's how it works.

Most games revolve around the established ‘zone’ value

Move selection model and scoring model were established for board games and sports, via the ratio of solved uncertainty over the game's length, which allowed game refinement measures concerning the magnitude of gravitational acceleration "felt" in mind. Then, the notion of speed in the game was established. The research finds the difficulty of solving the outcome uncertainty defines mass in mind.

Using established game refinement theory for design and analysis of games is valuable, video games are 300 percent more revenue than movies and 10X more revenue than music, but this could also have application in flow theory of education, business, engineering, system design, artificial intelligence in games, search algorithms, and more.

That time share company knows using the laws of physics to get you there helps make you far more likely to buy something and future advances in optimizing the experience could really help them seal the deal.
News Articles
More Articles All Articles
About