There has been considerable interest in the publication of the platypus genome, which is good. Unfortunately, much of the reporting has been distorted, which is bad. However, rather than picking on the press, I want to focus on an example from the scientific literature where a misconception about evolutionary relationships seems to creep in and generate confusion. Consider the following line, from a soon to be published paper about platypus sex chromosomes (Veyrunes et al. 2008).

As the most basal mammal group, the egg-laying monotremes are ideal for determining how the therian XY system evolved.

Now, the study's conclusions are interesting. While most mammals show an XY system (males XY, females XX), the monotreme system is quite unique (5X5Y males, 5X5X females), and has some similarities to birds in terms of which genes are involved in determining sex. Thus, because monotremes have a system quite different from therians (placental and marsupial mammals) and the split between monotremes and therians occurred earlier than that between placentals and marsupials, the system in therians must have evolved after the split between theirs and the monotreme lineage. Also, one can identify regions on platypus autosomes that correspond to the sex chromosomes in other mammals, suggesting that the therian sex determining genes are derived from former autosomal regions (this was already apparent through comparisons with other non-mammalian vertebrates).

The problem is the way this is framed. The platypus is a modern species. Like all modern species, it retains some ancestral characters (e.g., egg-laying and milk secretion without nipples), posseses many highly derived characters (e.g., electroreception and venom), and shows convergent evolution with some other groups (e.g., "duck bill"). It is entirely possible that the chromosomal system in platypus is similar to the one found in the common mammalian ancestor, but to assume that because this species is "basal" (i.e., "early branching") it must be primitive in terms of any particular characteristic is a fallacy that I have mentioned previously (Phylogenetic Fallacies: Early Branching Must Mean Primitive; see Crisp and Cook 2005; Gregory 2008).

As the most basal mammal group, the duck-billed platypus is ideal for determining how the therian feeding system evolved.

One's immediate reaction would be, "But the ancestral mammals did not have anything like a 'duck bill'!".

Another issue arises when the authors (and especially the press) say things such as,

Monotremes do not possess bird characteristics. Either monotremes and birds demonstrate convergence, or exhibit co-option of the same features in a superficially similar character, or both retain a feature that existed in a common amniote ancestor which may have been lost in other mammals and/or modern reptiles. The comparisons are being drawn between platypus and bird (chicken) genomes in recent studies largely because there are no reptile genome sequences yet available, and because phylogenetically birds are reptiles, though very derived ones. Because we share a common ancestor with monotremes that is not shared with birds, humans and platypus are equally closely related to birds. Using the same logic found in many news stories, one could argue (falsely) that humans are more bird-like than platypus because we are bipedal, for example. When a paper states that a platypus feature, such as its sex chromosome content, is "bird-like" or "derived from an ancestral bird-like system", they are not saying that it is actually derived from a bird. One also could just as easily say that birds have platypus-like chromosomes, though this would be more awkward because the bird system was understood first and because there are far more birds than platypus (10,000 species to 1) -- but it is not because platypus is primitive and birds are "advanced". In fact, under the hypothesis presented by Veyrunes et al. (2008), birds have sex chromosomes more similar to the ancestral amniote system, making them more primitive than the platypus.

Finally, the authors present a phylogeny with -- predictably -- humans at the top and increasingly un-human-like groups branching off at earlier and earlier dates. As noted in an earlier post [Phylogenetic Fallacies: Branching From a Main Line], each node can rotate without affecting tree topology, such that this neat story is not so tidy. Here is the tree they presented (redrawn in simpler form). 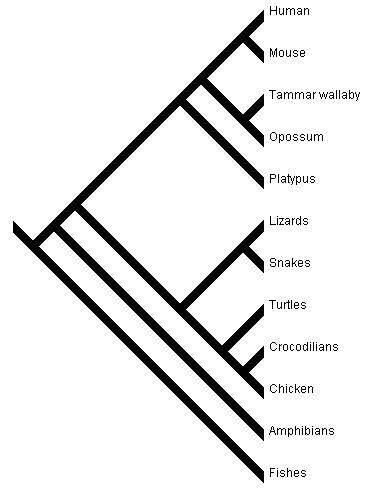 Here is an equal tree in terms of relationships. 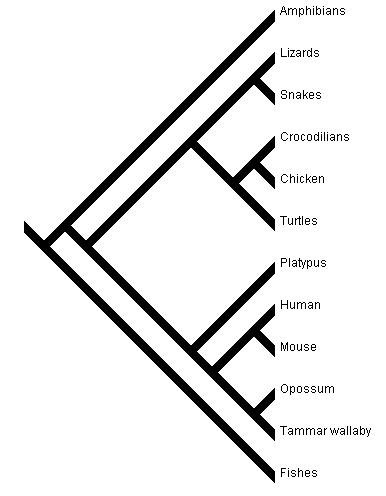 The same hypothesis regarding chromosomal evolution (a primitive bird-like ZW system, modified only slightly in modern birds, more in platypus, and replaced with a very different mechanism in other mammals) could fit the second tree, but it would not be as obvious.

The main point is that comparisons involving platypus, opossum, humans, rodents, birds, and other vertebrates are interesting and informative, but one must not forget that these are all modern species whose lineages have been evolving for exactly the same period of time since diverging from a common ancestor. None as a group is "primitive", rather some retain more specific ancestral characteristics than others, but all are highly derived with regard to other features. This applies to the genome as well as to fur, feathers, and bills.

For more on this topic, have a look at Nimravid, Adaptive Complexity, and Pharyngula.

If you enjoyed this post, please consider subscribing to the Genomicron feed to receive articles and blog entries.