Michael Martinez
Blame Jack Kirby and Stan Lee for the word "formuloop".  They did not devise it.  They made a comic book about four people who went into space and then returned to Earth with magic super powers.   Such a fantastic time I had reading their adventures as a kid.  One of their catch phrases was "swell foop", which is a type of Spoonerism, and that has nothing to do with "formuloop" other than that my word was an inevitable evolution of "swell foop".  But if that doesn't make it clear, then let me put the relationship this way: we strive to relate what we see to what we know, thus reinforcing what we believe; hence, we have a sustainable formulaic way of keeping ourselves in the same informational loop.  If it was not for the Fantastic Four I wouldn't have known all along that the universe creates super-powered people.
So far our super-powered people exist mostly on paper, although Stan Lee has a television show where he seeks out people with real super powers.  It's a bit like Andrew Zimmern's show about eating strange foods, only no one gets eaten and so far I don't think Lee and his producers have tried to show anyone actually flying and melting armored vehicles with laser vision.  But the Kirby-Lee Principle remains in force: if we send enough people into space, sooner or later someone will return with the ability to fly.  We just cannot predict how that ability will manifest itself.

What leads me to this simple manifesto is a recent article in Wired about a physicist's quest to understand the flow of time.  Dr. Flavio Mercati studies quantum gravity and in his spare time does stuff I know nothing about (literally).  I could begin to describe quantum gravity but, frankly, I wouldn't know what I am talking about so I'll spare you any attempt to set myself into that kind of formuloop.  What I do know a little something about, however, is how large systems behave and I could not help but pull up a chair to the kitchen table when I read the article in Wired about Dr. Mercati's work on time.  Let me cut out all the math and science and reduce it to a simple graphic: 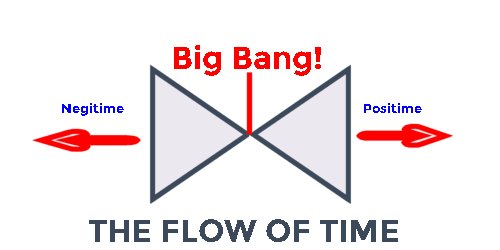 The words "Negitime" and "Positime" are my own.  I just think they sound cool and were easy to include on the graph.  But here we are, at this point in what I call Positime, moving irreversibly in a directional flow that Dr. Mercati's work attempts to explain.  According to the model he has proposed (which awaits further elaboration and integration into Einsteinian physics) a random cloud of particles will gradually flow inward and organize itself in a supercompressed state that then expands outward.  Well, that is what I understand it all to mean.  Which implies that time flows in the opposite direction on the other side of the Big Bang (or the singularity that precedes it).

The Mercati model says that as time flows outward the universe forms more complex relationships within itself.  The complexity increases in inverse proportion to the amount of entropy in the system (or, perhaps more accurately, entropy can be described in terms of complexity).  If his theory is right (and if my theories are right) that implies that information must increase in complexity over time.  Not can but must.  Why?  Because time doesn't stand still.

If the singularity represents the least amount of information, or the least amount of complexity, then we can say this mean that every complex system evolves from simplicity.  Simplicity and singularity are one and the same thing.  But this is 2-dimensional thinking.  We are proposing that information can only emerge in 1 or 2 directions, which is different from what my morphing sets argument proposes.  But what if information can evolve in more than 2 directions?  Complexity can increase in any of infinite directions, can it not?

That might imply that there are perpendicular possibilities emerging from the singularity (and I admit I have no idea of whether the math allows this).  From what I understand about the physics of the universe, everything sort of breaks down as you approach the singularity, and cosmologists keep searching for math that distinguishes something from anything else in that early formative period of information.

Not that we need to find perpendicular timelines in order to make all this useful or interesting.  I think, however, that the identification of entropy with complexity does help make some things easier to understand.  For example, if we view the flow of time as a vector of discrete states then we can describe the expansion of space in terms of morphing sets (which inject new information into a "closed" system).  Your so-called "dark energy" models could be mapped to a morphing set theory, if dark energy is real and truly is driving the increasing expansion of the universe.  Dark energy doesn't have to come from outside the universe, it just has to come from outside whatever frameset we think is governing the movements of objects in the universe.

If space is growing larger as the things within space are moving away from each other, then space itself is a data superstructure that is evolving.  That doesn't tell us whether the expansion is infinite or will reach a limit, but it does suggest that the expansion must be influenced by something other than what we so far have identified (mass, gravity, and all the other "simple" stuff).  We really do wake up to a new universe every day.

In terms of my own work in studying the Internet this does seem to offer some solutions to questions that have nagged at me over the years.  For example, will English always be the dominant language on the Web?  Why is this important?  Because if, for example, French were to overtake and replace English as the dominant language we would find our universal memes and structures evolving in new directions.  The language we use to express our ideas shapes the context of those ideas.  "Context" in this sense is a data superstructure that arises from the creation an sharing of ideas.

Think of the subset of Websites that constitute science information (an informational niche) on the Web (regardless of language used).  That subset did not exist 20 years ago, but today there are idiomatic properties of the science Web subset that arose directly from the creation of these Websites.  The idiomatic properties may include forms of citation, relationships between specific Websites (expressed via links, direct citation, and implied citation), and aesthetic memes that are peculiar to science Websites (such as certain forms of notation or annotation).

In terms of cosmology the emergence of galaxies from clouds of gas is comparable to the emergence of informational niches on the Web.  Once either system was set into motion it became inevitable that something would emerge from the original state of the system; and in each successive state something else has emerged, or the system found itself in a transitional period that pointed toward the emergence of new complexity.  What we want to know is whether complexity is really discrete or if it changes by leaps and bounds.  That might help us determine if there is actually a measurable rate of growth for time, which in turn might tell us some other interesting things.

That is a formuloop.  It doesn't have to be right or wrong.  It just has to make sense to someone, and this one makes sense to me.

Interwebometry
More Articles All Articles
About