Hank Campbell
During the short time that Roy Thomas took over as writer of the Fantastic Four from Stan Lee, the original writer, it got a lot better.  I know, I know, that is blasphemy.(1) There is a reason Stan Lee gets a cameo in every movie about every Marvel superhero - he co-created them all, he made them all famous. He is a bigger legend than the guys behind Batman or Superman, his economic impact rivals the GDP of many small nations.

Still, when is the last time you read a good Stan Lee comic? Eventually, people are just phoning it in. And that had happened on the Fantastic Four by 1972.

By the time Stan Lee stopped writing the Fantastic Four, Jack Kirby was already gone but we had great art in the form of John Buscema, yet stories like another Alien Creature from the Black Lagoon, a fight against an African dictator, a fight against a South American dictator, two alien conquerors, the Thing on another planet, fights against commies and they hired a witch to take care of their son in a deep, foreboding forest. We also had a good Galactus appearance again but nothing new coming out. It was time for a change.(2)

Roy Thomas enters the scene and suddenly these are real people again - the thing that Stan Lee had done which made the group, and Marvel, famous.  Reed Richards, Mister Fantastic, had always been kind of a jerk, for example. I don't know why anyone endured the way he told people to shut up and ordered him around and no one understood why Invisible Girl put up with it.

I bet Jack Kirby was happy to foist off lines like this on Stan Lee. The rest of the time, he wanted all of the credit.  Link: Houston Press

He supposedly loves her but a lot had changed in 10 years and that stuff just was not playing during the Sexual Revolution.  From the earliest days of the series, fans had been critical of her anyway.  She was either a wallflower or being kidnapped and that part had been solved, Stan Lee went out of his way to have her saving people, but nothing explained how she could like this scientist who ran the group. He was insufferable.

So Thomas highlights that obvious fracture and introduces a complex, strong female character, from a dimension where women rule and men are protected in a kind of patronizing dhimmitude. She wouldn't even bother to fight them, in the 'I would never hit a woman' way men talk about the opposite gender even today, except in this dimension men were stronger so she wanted to defeat only their very best. But outside that, she refused to harm the weaker sex.

In a later appearance, fighting The Hulk, she would say, "You’re right, beast. I am no woman. I am all women" which was a nice turn of phrase. Oh, and she was 7'2" and weighed 350 lbs. yet still looked pretty hot. That's a modern woman.

What do we get from her descendants today?  Modern feminism is instead another form of creationism - the same demographic who loves to scoff because their cultural opposition has slightly more belief in religion refuses to be skeptical about anything that contradicts anti-science feminist beliefs about the diverse nature of human beings.  We could all do with more Femizon and less Feminazi, but unfortunately comic book writers of today are more inclined toward political correctness. We have few young Frank Miller's, who can skewer both the left and the right on a single page and do it so brilliantly no one could get mad.  Meanwhile I will suffer stereotypical claims of 'white male privilege' for saying feminism has lost its way, which will prove my point.

After Thundra, he introduced a villain who was inspired and powered by subconscious racial guilt.  That may seem trite and exploitative today, but that is because few people concede that there has been any improvement so a lot of racism is simply people who need to find racism to promote their agenda or raise money. As someone raised in the south and was born in the 1960s, and who has traveled all over Europe and Asia, you can be sure America is far less racist than those places and even the southern US is nowhere near as racist as the stereotype goes.

Sure, comics latch onto trends. The Silver Surfer came out during the beach craze in the 1960s and in the 1970s we had a villain who rode a skateboard and a hero who was basically a disco singer - today a comic book character is turned gay every other week. But comics can also shape thinking when they are subtle. There was no media announcement and no interviews about introducing a giant villain. All we saw was that the more the heroes attacked, the stronger he got. It wasn't until the end of the story arc that we saw he was created because the Inhumans - this alternate branch of humanity with special powers who lived secluded in the Himalayas - had let the Alphas toil away doing their manual labor. This had been exactly the society that Intellectuals had envisioned for America in the early 20th century, they even created a special test that would separate the elites from those who should instead be taught a vocation - we still know it as the IQ test.

This Omega character was rather brilliant. And the wife of Reed Richards finally split from him, which meant we got someone to replace her.  In a few issues, Roy Thomas set the tone for the next 10 years in the series and addressed racism, sexism and the divorce epidemic on the horizon.

Not to pick on his successor, Gerry Conway, but after Thomas departed we went right back to a monster, a dangerous biker about 20 years after "The Wild One" came out (yet a few short years after the Hell's Angels proved that rock musicians were idiots for trying to seem edgey, namely for hiring bikers to do security at a concert) and another conquering alien.  And we started getting stuff like this:

He is basically telling his opponent, Thundra (the Femizon that Thomas created, mentioned above), that he can get as hot as a lit cigarette and that should worry her, even though she is here from an alternate dimension where Femizons rule and she is their best fighter.

Conway had his own wins, it just wasn't with the Fantastic Four. He created The Punisher, which became one of the more dominant Marvel characters in the 1990s, and killed off Gwen Stacy in Spider-Man, which was a shocking development in a kid's comic. Those were modern legend when I was a kid.

But for showing the real promise of the Fantastic Four - and I don't mean the misty prism of nostalgia, but stuff you can read today without wanting to claw your eyes out - no one did it better than Roy Thomas. Had he continued, perhaps the Fantastic Four would have been the dominant Marvel group of the 1980s rather than those X-Men guys.

(1) Or not. Since Marvel has been so successful, and our culture has become postmodernist, it is open season on the living guy, Stan Lee, and overly fond remembrance of the dead guy who was his most famous collaborator, Jack Kirby. Kirby went out of his way to claim Stan Lee did nothing (ironically, what his former partner, Joe Simon, did to Kirby) ever, he even claimed to have created Spider-Man, which can't have made fellow artist Steve Ditko happy. Basically, we are set up to support the underdog even when the well-known history is accurate. Jack Kirby did okay work when he left Marvel and went to DC, but who is making a movie out of "Kamandi: Last Boy On Earth"? No one.  And when he returned to Marvel to do Captain America by himself for America's bicentennial, the issues were horrid. After he got his 'big' story out of the way - it is unreadable now - he started to get into a groove, but a year later he was gone again.

And yet everything with Stan Lee's name on it is a gold mine. There is only one thing Avengers and Spider-Man have in common, and it is Stan Lee.

The 'Marvel Method', as it came to be called, is now used as a weapon against Stan Lee.  Because he turned comics outside down. He came up with a plot and then let artists draw and and they had the confidence he would make it work after they were done. This was the exact opposite of how things worked in the past, when the artist was basically a storyboard picture drawer working from a script.   Stan Lee made the Superstar Artist possible but detractors will claim that he was no factor in that success.

(2) For some reason, though he had a little to do with the look of the Silver Surfer - Jack Kirby just showed up with it in yet another 'alien conqueror' story - Stan Lee developed a special affinity for him and Galactus, obviously based on the finished look they had. He did have one great story left in him after he stopped writing the Fantastic Four. Silver Surfer: Parable from 1978, with art by Moebius: 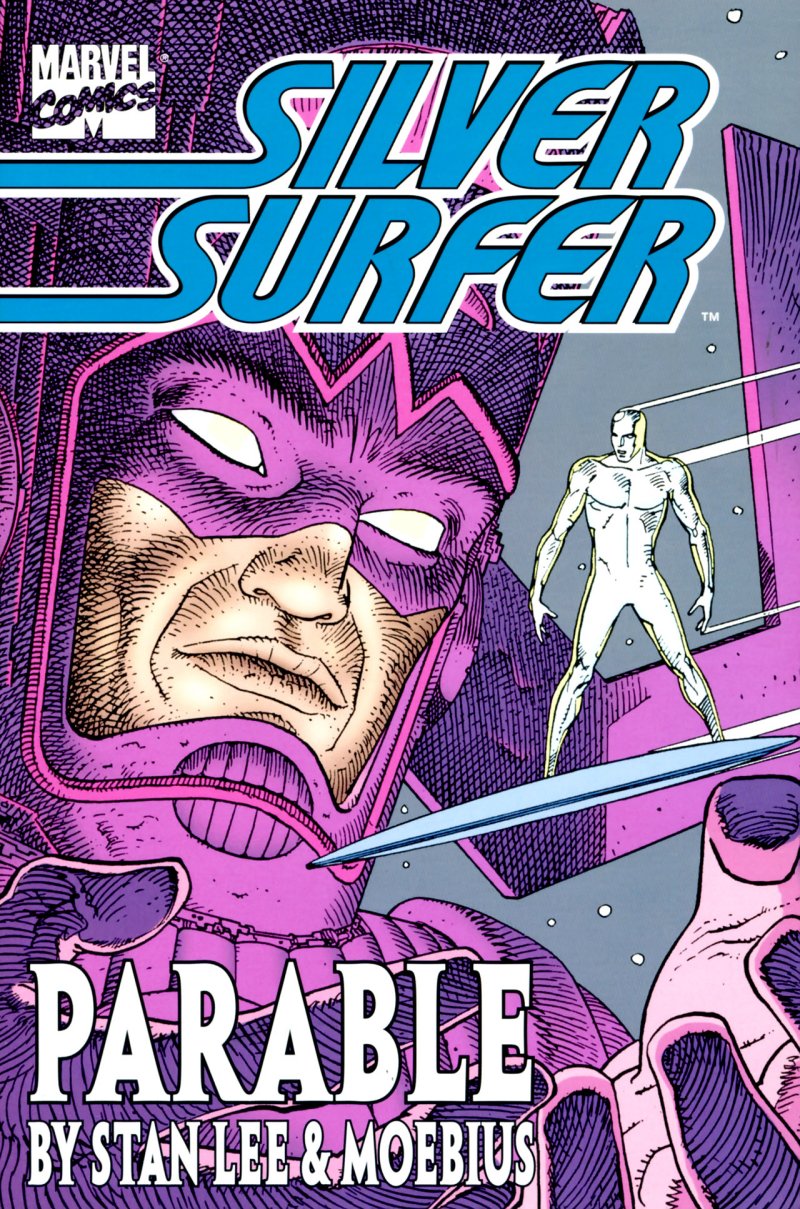