Tweet
At the end of "Marvel's The Avengers" we had some idea who the next film's big villain would be - we just didn't know they would build the entire MCU around him.

That's because there was no indication these movies would become as big as they became. The Incredible Hulk movie, Iron Man 2, Captain America: The First Avenger - all rather weak. Only Iron Man and Thor were well-regarded by the public then. At the end of The Avengers we saw what to older comics fans was clearly Thanos; and that smile when he was told messing with humans was 'to court death' told us it was going to be original Thanos, the one in love with death, not the fuzzy-wuzzy Eugene Odum-esque 'balance of nature' hippie we got. Like seeing Nick Fury and a replica of Captain America's shield in Iron Man, fans got to wonder if it was just the kind of homage writers and directors engage in or something real.

Now there is no doubt Marvel has a plan.

When fans know you have a plan, they are going to want to figure it out. With the re-acquisition of properties they had sold off, such as the Fantastic Four, some have wondered if the next big villain might be Galactus, the 'devourer of worlds.' Less likely is the time traveling monarch Kang, scheduled to appear in the next Ant-Man film.

But we just got the trailer for The Eternals and it tells us absolutely nothing except that they are not supposed to interfere.

Which tells us that the next villain will be The Celestials.

Marvel has said nothing of the kind, but here is why they are the Big Bad. In 1970, after Jack Kirby had a falling out with Stan Lee, Kirby went to rival DC, home of Batman, and created properties like Kamandi: The Last Boy on Earth, Mister Miracle, and New Gods.(1)

The early 1970s had two big things happening in pop culture; demonic/supernatural possession (seriously, Marvel even had a comic called Son of Satan) and belief that aliens had visited us in the past, thanks to the popularity of 1968's "Chariots of the Gods." Lee and Kirby latched onto every fad (come on, the Silver Surfer during the Beach Boys craze?) and New Gods at DC was part of that alien creator thing.

But his books were all getting canceled at DC and he knew his contract was not going to get renewed at the rates he had, so he jumped back to Marvel while Lee still missed him. Yet the gas was clearly out of his tank. His run on Captain America up to issue #200 was weak(2) and The Eternals looked so much like New Gods he's lucky he didn't get sued.

Predictably, The Eternals, Humans, and Deviants were created by the kind of omnipotent alien that Marvel loved - the Celestials. They were going to return to Earth to judge their creation, in Old Testament style. 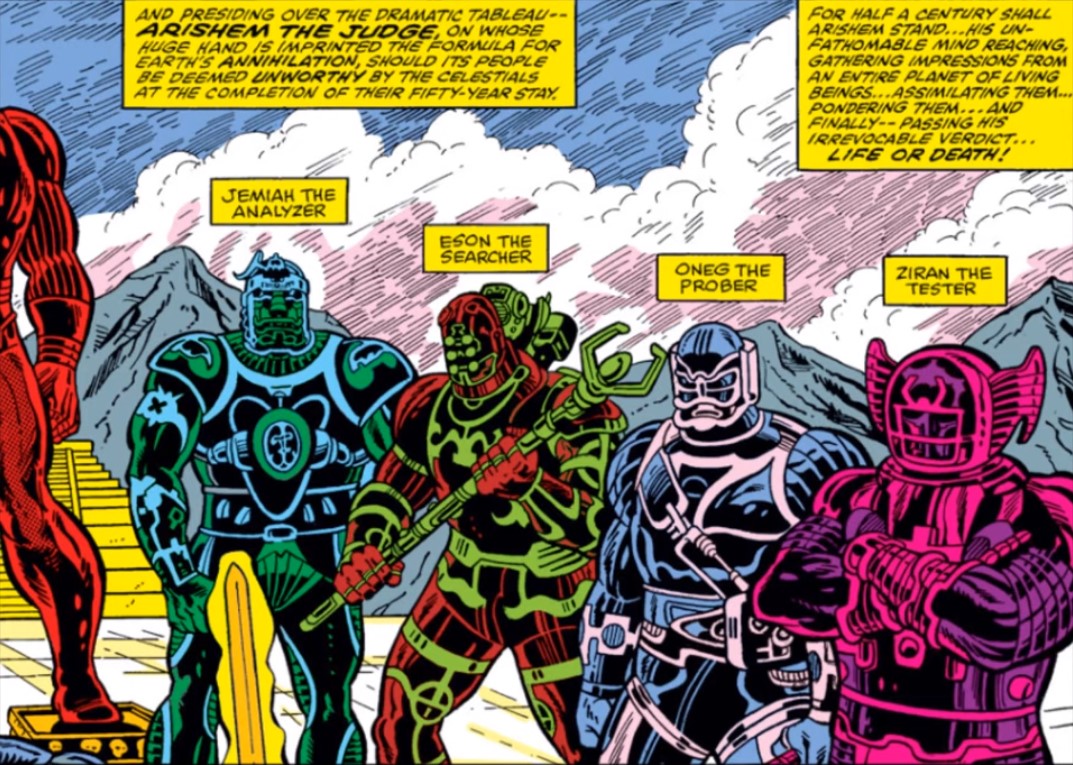 When Kirby eventually left again, the book was canceled but the idea was not. Roy Thomas set out to rework the entire Thor mythology and to make it about The Celestials as well, and it resulted in a startling run of quality books, as you can see in the panel above.(3)

We have actually seen them in the movies before. In Guardians of the Galaxy, the giant holding the power stone in the explanatory scene and mowing down people is obviously Eson. He just looks too much like a Celestial from the comics to be coincidence.(4) 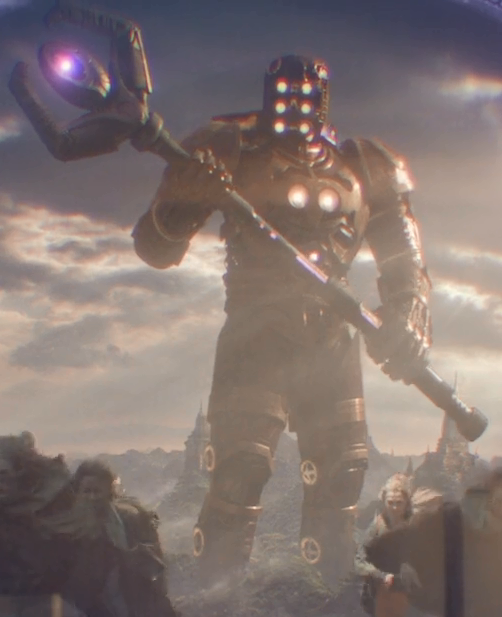 Which means it is too much of a coincidence that The Eternals are the movie Chloe Zhao wanted to do after turning Marvel down for Black Widow. She gets to be the director that lights the candle for the next big thing, the way Ken Branagh gave the MCU Loki.

You have ties to Thor and Guardians and Celestials are a galactic-sized enemy. Galactus just wants to eat the planet, he can't really be considered an enemy. Plus, if they are going to use a Fantastic Four villain as the next Big Bad, the smart money would be on Dr. Doom.

(1) He even gave DC their own Thanos six months before Marvel had him. Darkseid first appeared in, of all places, Superman's Pal Jimmy Olsen #134, and his Marvel twin as a minor villain came later in Iron Man.

(2) His Captain America issues after that were quite good.

(3) The Thor run was a master class in connecting loose threads. They even worked in The Ring of the Nibelung as part of the Marvel Thor mythology. The Guardian, the weakest part of the Thor film, and the Odinsword, which in the comics would signal the end of all life when it was drawn, turned out to be accessories for Odin to face the Celestials.

It didn't end well for him.

(4) That doesn't mean it was planned that way, Marvel may not have been involved in every bit of creativity then. Now superfan Gunn says he has to clear every name through legal, so presumably the storyboards get similar scrutiny.