Superhero Science: Ant-Man And The Wasp Shouldn't Be Able To Breathe At Insect Size, Here's Why They Can
By Hank Campbell | December 12th 2018 02:23 PM | Print | E-mail

Hank Campbell
At insect size, miniature superheroes Ant-Man and The Wasp should be dead in minutes. Since they did not train on the top of Mt. Everest, they would be unable to overcome the atmospheric density they would have to face at tiny size, and that's without getting into the metabolism issues.

Ant-Man clearly didn't have a lot of scientific thought that went into him when he was created by a combination of Stan Lee and his brother Larry Lieber, plus artist Jack Kirby. But superheroes are big science business now. Billions and billions of dollars in box office will do that. They even have their own science publication, the Journal of Superhero Science.

A science journal about fictional superheroes? If Environmental Health Perspectives can get an audience, why not? Ant-Man is a lot more believable than that a weedkiller can cause human cancer. 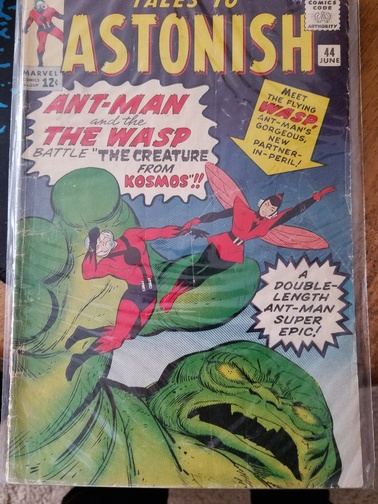 Tales To Astonish 44, first appearance of the Wasp. From my collection. There are not a lot. It was never a cool book, that is why they were all thrown into The Avengers together. The hope was more exposure would boost sales of this, Hulk (it didn't, it went bye-bye after six issues), etc. Bizarrely, that is how Marvel became part of modern pop culture. Al of the popular characters - Spider-Man, Fantastic Four, X-Men, etc. movie rights had been sold and the only ones they still controlled were B and C-level characters. Which just so happened to be Iron Man, Thor, Captain America, and a core group of Avengers. Photo: Hank Campbell.

Forgetting the shrinking or the quantum microverse, Ant-Man and Wasp essentially have a fluid flow problem when it comes to breathing. And a solvable one. Obviously insects do breathe efficiently and a human can also, with the right helmet. Virgina Tech researchers took a look at how this microscale respiration would work, and how technology would solve the "death-zone dilemma" that would be created when shrinking created what would be a crippling altitude problem for non-heroes and published it in the journal.

The authors were worried that new details in the movie sequel might debunk their ideas and they would be forced to retract their paper, but it was no worry. The director of "Bring It On" kept the science vague. “I went to the 2018 movie before the manuscript came out in preprint so that if the movie contradicted us we could catch it. But the 2018 movie actually supported everything we had said, which was really nice,” said co-author Max Mikel-Stites.