Research in all manner of renewable energy technologies abounds. There’s tidal energy, underwater turbines, biological fuel cells, cow poop power. You name it someone’s probably having a go at it. Now researchers at the New Jersey Institute of Technology have come up with the kind of power source that is reminiscent of the Star Trek materializer – solar cells that spew out of an inkjet printer. It’s so simple, anyone can do it.

No more bulky, unsightly roof-top panels. No more taking out a second mortgage to do the right thing and be off the grid. Nope, you just slide in the flexible ‘paper’, hit the print button, and out pops a slender solar panel of the size and shape you designate – cheap and easy.

Instead of wrapping cars in advertisements to make money, let’s wrap ‘em to make energy. Roll up your “power pad” and take it camping. Slather your roof in power grids – and no one can accuse you of violating your home owners’ association regulations.

Oh, and did I mention the researchers think you'll be able to paint this stuff on as well? Run into a disaster zone, slap some solar paint onto a flat surface that is looking at the sun, and voila! Instant power.

Unhappily, the folks at NJIT aren’t quite ready to paint my motorcycle helmet with the stuff so I can plug in my iPod and listen endlessly to NPR’s Climate Connections while zooming down the highway. However, they have got experimental units working in their labs. 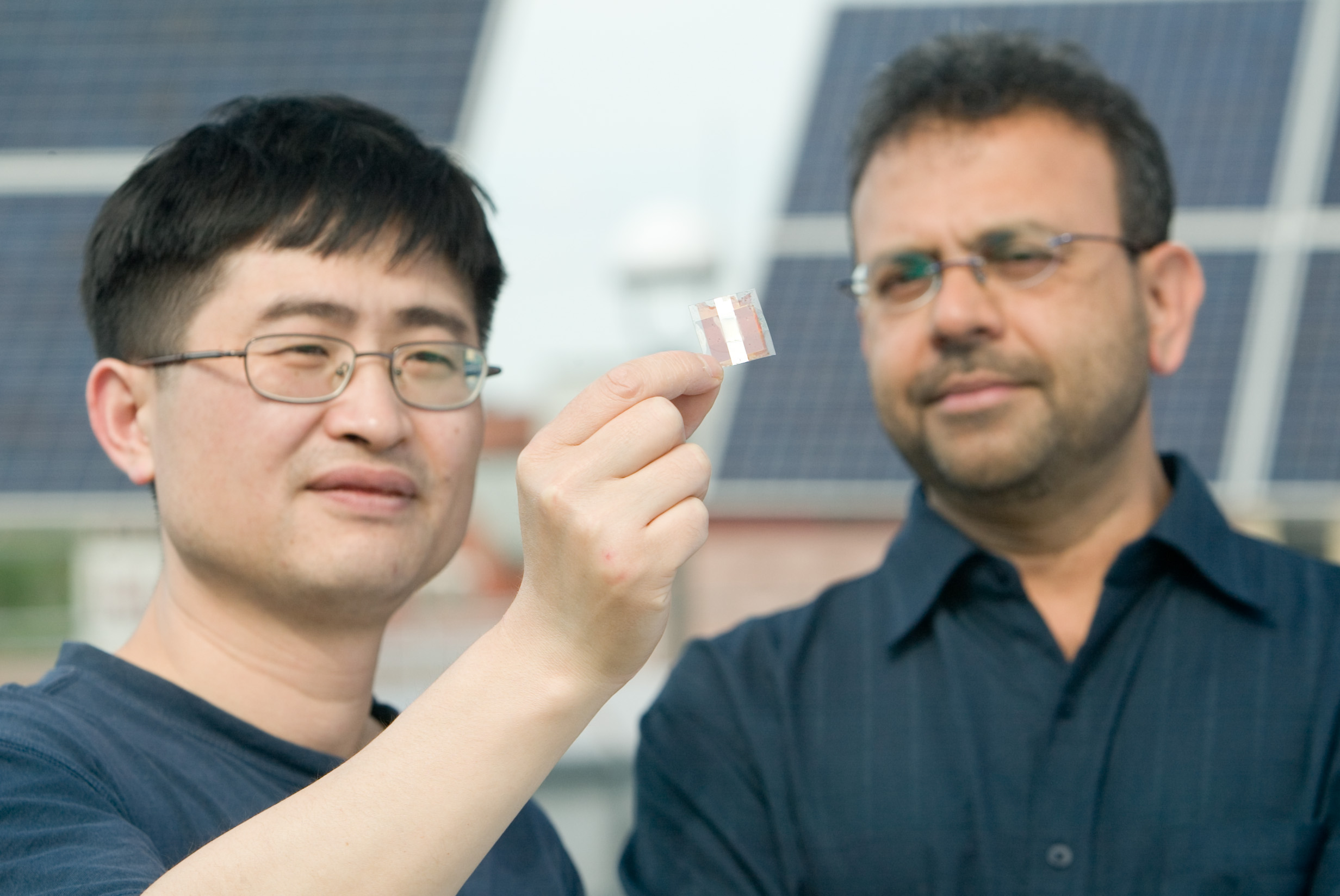 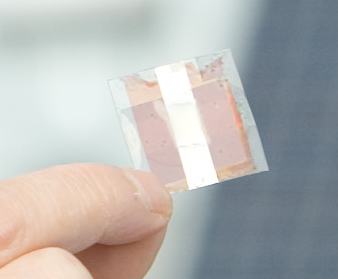 “Right now we use a reaction in a microwave to combine the nanotubes with the fullerenes (Buckyballs), and then coat them on [a] plastic sheet. Although we are not printing them now, it is clearly the same kind of approach.”

Here’s how it works in very simplistic terms. Sunlight falls on the plastic sheet – which is not exactly any old plastic. It’s a fancy polymer made for solar applications. The sunlight excites the polymer so it produces electrons. The Buckyballs snatch up the electrons, hand them off to the nanotubes to transport them. The current then flows down wires connected to the solar cell and lights up your house. Or billboard. Or boat. Or whatever else you want it to power up. 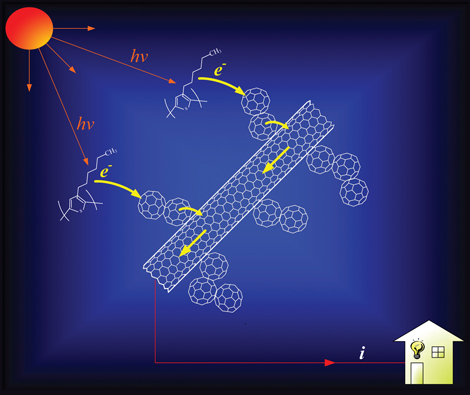 Earlier this year, Mitra published the results of his research, which advances thin-film technology. His paper “Fullerene single wall carbon nanotube complex for polymer bulk heterojunction photovoltaic cells” was featured as the June 21, 2007 cover story of the Journal of Materials Chemistry printed by the Royal Society of Chemistry, and details the process. The Society, based at Oxford University, is the British equivalent of the American Chemical Society.

Early thin-film solar cells already on the market haven’t yet slashed the cost of solar cell production as hoped. They have, however, increased applications. Power Film, for instance, advertises solar cells that adhere to fabric used as building canopies. I’ve been lusting after one of those backpacks with flexible, lightweight, thin-film solar cells sewn in. You can even find transparent ones on windows.

One of the challenges with thin films is that they are typically less efficient than traditional silicon-based solar cells. In 2006, California’s SunPower introduced its silicon-based cell that boasted a record-breaking 22% conversion of sunlight into electricity (most are less than 20% efficient). Thin films currently convert less than 15%.

Silicon-based systems make up 86% of the world’s solar panels, but are ultimately highly limited in scope. In 2006 their production ate up one third of the world’s electronic-grade silicon, thereby hampering manufacturing capabilities, and preventing the industry from meeting demand. A primary attraction for polymer-based thin film technologies is that they don't use a jot of silicon.

What Mitra says sets his apart from other thin-film applications is the speed with which the Buckyball-nanotube complex conducts the electricity, thereby catapulting efficiency... in theory, at least. According to Mitra, their lab test cells are not exactly screaming fast, but the first challenge was simply to make a system that works, which they have successfully done.

The Buckyball-fullerine complex “can be added to any solar to enhance it further, even the quantum dot one,” says Mitra. Quantum Dot solar cells, or QD for short, are nanocrystals embedded in a support matrix. The size of the dot dictates what wavelengths it absorbs, thereby allowing the dots to be tuned to whatever wavelength the support matrix best transmits, making them incredibly efficient.

Where the theoretical efficiency limit of silicon-based cells is on the order of 33%, QD’s is more than 40%. The firm Evident Technologies, which is developing QDs, claims it is as high as 60%. In any event, it’s a lot better than what is currently on my garage roof. Adding Mitra’s technology to QDs would supposedly further boost the amount of sunlight transformed into electricity.

There are other highly effective technologies on the rise, of course. Last year, Boeing announced it had made prototype solar cells that reached just over 40% efficiency - the most efficient ones produced to date. Apparently, Sharp Electronics has made cells reaching 36%.

The battle to make low-cost, efficient solar cells that everyone can use and afford is roiling with hundreds of firms trying to hit it big with the technology that will light every house in sun soaked regions of America and beyond. Whether it’s Mitra’s or someone else’s that wins the race, the future of solar technology looks very bright indeed.