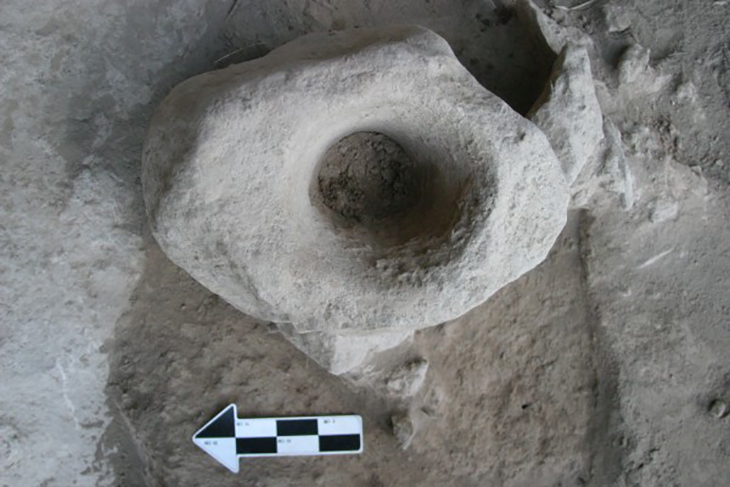 By Joel Shurkin, Inside Science - Once upon a time, there lived a people we call the Natufians. They were among the first to quit their nomadic ways and settle on land where they grew crops, lived in complex settlements, put up stone buildings, domesticated dogs, and might have invented cemeteries before their society disappeared into the mists of history.

Israeli researchers now think they also may have developed a unique telegraph system to let everyone know when a catered funeral was underway and were among the first people to put up grave markers.

Natufian archaeological sites are common in Israel, Jordan, the Palestinian territories and Syria, said Dani Nadel, a professor at the Zinman Institute of Archaeology at the University of Haifa. There are some 400 Natufian skeletons in Israel and cave sites all over the region.

The Natufians lived from around 15,000-11,500 B.C., sometime after the retreat of the glaciers from the Ice Age. It likely was a time of great bounty, with wild versions of legumes and grains such as wheat and barley. Forests had grown back thick and lush; game was abundant.

They apparently also may have been the co-inventors of bread. Researchers at Bar Ilan University in Ramat Gan, Israel and Harvard University in Cambridge, Massachusetts, believe conical shaped structures the Natufians carved into rocks about 12,500 years ago could have been used to grind wild barley into food producing a "proto-pita." The making of bread is considered by archaeologists to be one of the keystones of civilization. The Natufians apparently did it more than 1,000 years before humans domesticated the grains.

That bounty of the land may account for the decision made by the Natufians to stop wandering and settle in communities, believed to be among the world's oldest villages. They created small settlements and were the first to build houses with stone foundations and plant crops, meaning they saved seeds, and replanted them.

Some of the ruins cover 13,000 square feet and include a thick layer of deposits, which indicates that people had lived there for longer than just a few months. Some of the round foundations are still standing 15,000 years later.

"It's amazing in my eyes," Nadel said.

The Natufians got their protein from hunting, especially gazelles.

The Natufians buried their dead together in cemeteries, sometimes with flowers and leaves. Some were buried with dogs, the first domesticated animals. Some were buried under the floors of their houses. The Haifa researchers also found evidence of feasts around the graves.

Some Natufian cemeteries became the final resting place of as many as 100 people of all ages. Their mortuary practices indicated a cohesive, organized society that mourned and honored their dead.

What intrigued the researchers were large round boulders that had been dragged to the burial sites. A lot of Natufian art involved carved stones, but these stones were special, and archaeologists have debated their purpose. They seemed to be only placed near grave sites.

The boulders were rough and seemingly designed to be functional. Unlike the other carved Natufian stones, no effort went into making them beautiful. The mortars have not been dated, but probably came late in the Natufians' history.

They are irregular in shape, weighing between 85 and 220 pounds, some two feet across, and three feet high buried as much as two feet deep. They had shafts carved into them, and were made of limestone or dolomite.

Nadel, and his coauthor, Danny Rosenberg, also of the Zinman Institute, suggested in their article in Current Anthropology that most of the boulders were mortars used for grinding grain. The larger ones, however, were most likely "used in the social realm, for example during burials or memorial events. It is also possible that during these events they were used as musical instruments," Nadel said.

We see them as implements essential for the successes of the ritual. And most probably, important for the "future of the deceased or the living community and as implements bearing significant symbolic meanings pertaining to the production of food and the transformation of substances from one state to another," Nadel and Rosenberg wrote.

Nadel emphasizes that this is all mostly speculation.

"Like many things in archaeology, we don't have a smoking gun; it is mostly circumstantial evidence," he said.

"Likely, the sounds of actual pounding accompanying these ceremonies may have been used to signal members of the relevant group that such events were taking place and together with the material processed, designated either to the living and/or the dead," the Haifa researchers wrote.

"Sounds possible," said David Lubman, an acoustical consultant in Westminster, California who has done research in acoustics in ancient societies. The people might pound in synchrony, and it might even be hypnotic to the pounders. The sound would carry some distance, he said.

The only danger, Lubman said, was that the noise might also alert enemies.

Natufian society eventually disappeared but there is no evidence anything dramatic happened to them. Rather, their culture and innovations probably were absorbed by others around them, Nadel said, and they eventually faded into the surrounding population. The climate eventually cooled down, which might have contributed to their disappearance. No DNA has been discovered so no one knows for sure.

Joel Shurkin is a freelance writer based in Baltimore. He is the author of nine books on science and the history of science, and has taught science journalism at Stanford University, UC Santa Cruz and the University of Alaska Fairbanks. He tweets at @shurkin. Top image of a boulder mortar found at the Natufian burial site in Rakefet Cave, Mt. Carmel, courtesy of Prof. Danny Nade. Reprinted with permission from Inside Science, an editorially independent news product of the American Institute of Physics, a nonprofit organization dedicated to advancing, promoting and serving the physical sciences.