This is not a story of Lost Tribes, but of lost history--the discovery of "Jewish genes" in Hispano Christian populations of the American Southwest. Jon Entine, author of Abraham's Children: Race, Identity and the DNA of the Chose People, reports.

“Let us remember all of our Jewish brothers and sisters, who through their faithfulness to One God, inspired all Christians.”

Resplendent in a red and white robe on a Palm Sunday Eve, Father William Sánchez solemnly marked what he calls the “Passover of Jesus,” the journey of the “King of the Jews” that begins with his entry into Jerusalem. 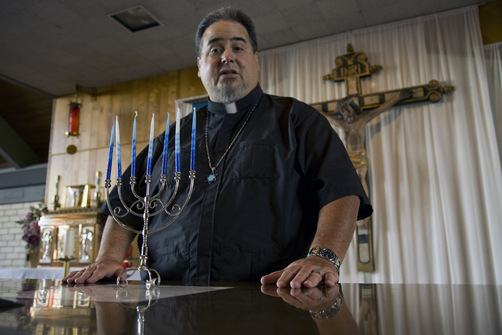 While Jews around the world celebrate the Lord’s decision to spare the Jews and preserve the Western tradition of monotheism, the Mexican-American congregants at St. Edwin’s, a modest church carved out of an aging parish hall in south Albuquerque, New Mexico, honor the Passover sacrifice through the prism of Jesus’ crucifixion and resurrection. Father Bill, as his parishioners affectionately call him, lifts the goblet filled with the sacramental wine to his lips.

From this moment in biblical time onward, for followers of Jesus, the covenant would be grounded not in blood ancestry but in the symbolism of blood represented by faith. This defining event marked a fundamental divide that would forever separate the religious identity of Jews from the followers of the two major religions that Judaism would spawn, Christianity and Islam. The question "Who is  Jew?" defined in cultural and ethnic terms and not just by religious belief, would henceforth be woven into western consciousness.

Jews of the American Southwest

I first profiled Father Sanchez in my recent book on Jewish genetics, Abraham’s Children: Race, Identity and the DNA of the Chosen People. Among other cultural threads, the book addressed the remarkable fact that thousands of Southwest Hispanos—descendants of marriages of Spanish men and female Native Americans— have discovered through genetic screening that they are descended from Jews converted during the Spanish Inquisition. There is even widespread speculation that Christopher Columbus was Jewish, as many of the men who accompanied him on his voyages to the New World certainly were.

The odyssey of exile for hundreds of thousands of Spanish and Portuguese Jews and conversos who refused to disappear as Christians would take centuries to unfold. Many Jews fled to North Africa and eastward through the Mediterranean. Many others left for the New World, where some resumed their life as crypto-Jews.

Jewish and crypto-Jewish communities flourished in far-flung new urban centers in Veracruz and Acapulco. Some gradually shed their secret lives and resumed practicing Judaism openly, and prospered as merchants and doctors. But the respite ended as the Inquisition gradually crept into Mexico.

Within three years, after the Inquisition was formalized in Mexico in 1571, the first auto-da-fé was held. Judaizers were either readmitted to the Church or burned. Crypto-Jews began heading north to Nuevo León, the sweep of land that today covers parts of northeast Mexico, around Monterrey, and southeast Texas. Over time, their commitment to Judaism waned. Whether sincere converts or acting expediently, many Jews took on local wives, usually Native Americans, or married into prominent Catholic families, even becoming priests and bishops.

Rumors have swirled for more than two decades that the American Southwest is home to hidden enclaves of Christians who once practiced Judaism. Many of Southwest Hispano families cover mirrors while grieving to prevent the spirit from escaping in the reflection, light candles on Friday night, refuse to work on the Jewish Sabbath on Saturday, avoid pork and have newborn boys circumcised––all signature Jewish practices.

Just last week, in an article accepted for publication in the European Journal of Human Genetics, Israeli geneticists from Sheba Medical Center announced that they had found that descendants of many Spanish speaking Americans in northern Texas and parts of Colorado, New Mexico, Arizona and southern California carry a potentially deadly genetic mutation--a variation of the BRCA1 gene known to cause breast and ovarian cancer in Jews. Geneticists have determined that it originated in the tightly knit Jewish community centuries ago, marking a carrier as a descendant of Jews.

Kathleen Blazer, a genetics counselor at the City of Hope National Medical Center near Pasadena, has been gene sequencing Mexican-Americans with a genetic predisposition to breast or ovarian cancer––those who contracted it themselves at an unusually early age or have a family history of it. She’s discovered a high percentage of carriers, even for Jews. “None of the families knew it, but they have Jewish ancestry––I’m almost certain of it,” Blazer told me.

The mutation also shows up in Hispano families elsewhere in Latin America. Researchers at the Hereditary Cancer Clinic at McGill University in Montreal cite the case of a Chilean woman with the deadly Jewish variation of the mutation on BRACA1. Most recently, the woman’s sister died of ovarian cancer at age 40, her grandmother of breast cancer at 52, and an aunt of breast cancer at 42. Going back four generations, her family had suffered at least nine cases of genetic cancer, all on the paternal side.

Based on the genetic marker found, “the family must have at least one ancestor of Jewish heritage,” the McGill scientists concluded, adding: The likeliest scenario, believes William Foulkes, senior author of the study, is that the ancestors of these breast cancer victims brought the mutation with them from Europe to New Spain and then ultimately moved north, perhaps in fleeing the Mexican Inquisition. They eventually migrated to South America.

This conclusion echoes research, highlighted in Abraham’s Children, pioneered years ago by a variety of scientists who have discovered outsized percentages of Southwest Hispanos carrying various diseases that are disproportionately found in Jewish families. “It can be traumatic and poignant when someone finds out they have Jewish ancestry because one of their family members is victimized by a genetic disorder linked to Jews,” said Janet Liebman Jacobs, a University of Colorado professor who has authored an anthropological study of crypto-Jews in America.

Jacobs recalled the case of one woman--who wanted to remain anonymous--who was identified with Creutzfeldt-Jakob, a degenerative neurological disease found most commonly in Libyan and Sephardic Jews. Even before the mutation was identified, the woman had suspected she might be of crypto-Jewish origin. When she was diagnosed, she sought counseling from a rabbi in Colorado. “You’re Jewish,” the rabbi told her. “It doesn’t make any difference if you are an atheist, you are Jewish. You don’t have to convert. You can just start practicing the laws if that’s what you want to do.”

The biology of Jewishness was recently reaffirmed in a new book, Legacy: A Genetic History of the Jewish People, by famed medical geneticist Harry Ostrer. His research has demonstrated that Jews around the world can trace their ancestry to a group of people who lived in the Middle East 2,000 years ago—the seed population for Judaism and much of early Christianity and Islam, as well.

Like many New Mexican Hispanos, Father Bill’s ancestors practiced an amalgam of rituals, which he had long thought were drawn from only his Spanish and Native Indian ancestries. Long curious, he sent his DNA to a genetic screening company, Family Tree DNA, to determine his lineage. A few weeks after sending in the swabs, he received a call from the Houston based company that would change his life and challenge his identity.

“Can I speak to William Sánchez?” said Bennett Greenspan, the founder of Family Tree DNA. “You’re definitely of Semitic, of Middle Eastern, ancestry,” Greenspan told him. “You have a marker that suggests that you carry a common Jewish mutation––a rare genetic marker found most commonly in Jews. If the Bible is accurate, you might very well be descended from Aaron, the Jewish priestly lineage that dates to the time of the Exodus.”

Father Bill discovered he carries markers, the Cohan Modal Haplotype (CMH), most commonly found in close relatives of those who are members of the Jewish priesthood, also called Cohanim. According to Biblical lore, the Jewish priesthood was established with the anointing of Moses’ brother, Aaron. The tradition was passed on through his male children, and henceforth from father to son. It became an oral tradition with the destruction of the Second Temple in the first century AD and survives today.

The revelation stunned Father Sánchez. DNA can reveal things both comforting and disquieting. It can confirm a common humanity—in this case the “Israel in all of us”—but also present troubling challenges to long held religious convictions or notions of race. To this day, he struggles to bring meaning to his genes.

“The fact is,” he said, his gaze both weary and determined, “I’m Jewish. Christianity may have changed the blood covenant from literal to spiritual, but it does not deny the ancestral connection of Jews to Christianity. I believe in the word and message of Jesus but I am a Jew, as well. God chose the Israelites. Jesus was Jewish. He died a Jew. I’m just acknowledging that fact, that spiritual fact, within myself. But now it has a literal reality as well. It’s imbedded in my genes, in my DNA.” 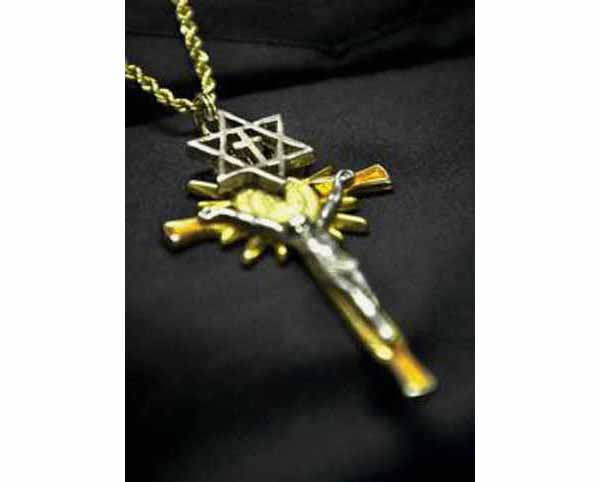 Christians, Muslims and Jews have always recognized a common spiritual heritage that originated, metaphorically or literally, with “Abraham our father”––the spiritual progenitor of 2 billion Christians, 1.3 billion Muslims, and 13 million Jews. But now we may have something deeper: a blood connection.

“I have a pluralistic, not an antagonistic, view of our religions,” said Father Sánchez. “I’ve been threatened with excommunication and suspension for talking about my Jewish roots, our Jewish roots here in New Mexico, but that does not deter me. I am drawing on my Jewish consciousness.”

In 2005, Father Bill finally fulfilled his dream of visiting Israel. “I don’t know where my Judaism ends and my Catholicism begins,” he sighed. “I wish I, I wish those of us searching, had a spiritual leader who could lead us through this. If I had to choose between truth or Judaism or Christianity, what would I do? I’d choose the truth. After all, we are all the sons and daughters of Abraham.”

Jon Entine, author of Abraham’s Children, is the founding director of the Genetic Literacy Project and senior fellow at the Center for Health&Risk Communication/STATS at George Mason University.

This article appeared in slightly altered form on Forbes.com.