Where Did The Jewish People Come From? Ancient DNA Of Ashkenazic Jews Sheds Some Light
By The Conversation | September 5th 2018 08:25 AM | Print | E-mail

Where do the Jewish people come from? This is a question that anthropologists, historians and theologists have studied for millennia.

According to mythology, the Judaeans descended from three patriarchs, Abraham, Isaac, and Jacob, who are buried in the Cave of the Patriarchs (Cave of Machpelah) in Hebron – a city in the Palestine region and a world heritage site located in the southern West Bank, 19 miles south of Jerusalem.

Buried alongside them are said to be Adam and Eve and the four Matriarchs – Sara, Rebecca, Leah, and Rachel. The cave has never been excavated, but on top of it is a relatively modern building (mid first-century), which Herod the Great built – likely to honor his ancestors.

For a more scientific take on the Jewish origin debate, recent DNA analysis of Ashkenazic Jews – a Jewish ethnic group – revealed that their maternal line is European. It has also been found that their DNA only has 3% ancient ancestry which links them with the Eastern Mediterranean (also known as the Middle East) – namely Israel, Lebanon, parts of Syria, and western Jordan. This is the part of the world Jewish people are said to have originally come from – according to the Old Testament. But 3% is a minuscule amount, and similar to what modern Europeans as a whole share with Neanderthals. So given that the genetic ancestry link is so low, Ashkenazi Jews most recent ancestors must be from elsewhere.

Not one, but many tribes

To understand why this is the case, we need to go back in time, to look at where these other ancestors came from. It starts in Persia (modern-day Iran) during the sixth century. This is where most of the world’s Jews were living at this time.

The tolerance of the Persians encouraged the Jews to adopt Persian names, words, traditions, and religious practices, and climb up the social ladder gaining a monopoly on trade. They also converted other people who were living along the Black Sea, to their Jewish faith. This helped to expand their global network.

Among these converts were the Alans (Iranian nomadic pastoral people), Greeks, and Slavs who resided along the southern shores of the Black Sea. Upon conversion, they translated the Old Testament into Greek, built synagogues, and continued expanding the Jewish trade network. 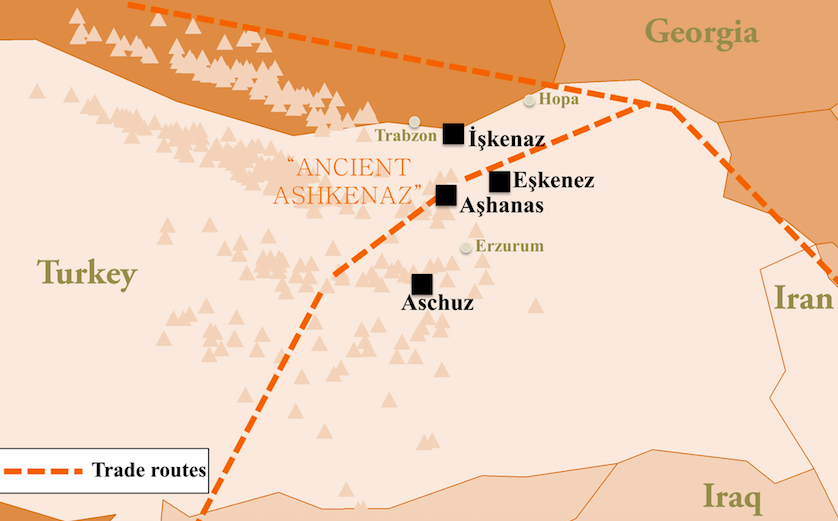 DNA of Yiddish speakers could have originated from four ancient villages in northwest Turkey. Author provided

These Jews adopted the name Ashkenaz, and the DNA of Ashkenazic Jews can be traced to “Ancient Ashkenaz” – an intersection of trade routes in eastern Turkey.

The rise of the Ashina

We now know that at the time these Jews adopted the name Ashkenaz, they also acquired unique Asian mutations on their Y chromosome. This is where another important group of people in our story come into play – and they are called the Gok-Turks.

During the sixth century, these nomadic people were ruled by a Siberian Turkic tribe called the Ashina. They were forced by the Chinese Tang Empire – who were in power in China at the time – to migrate westwards toward the Black Sea.

Thanks to their organizational and military skills, the Ashina united many tribes in this area – and a new empire called the “Khazar Khaganate” was born. Offering freedom of worship and taxing trade, these people quickly rose to power. 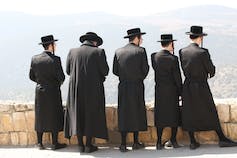 It was also around this time that the Jewish elite adopted many Slavic customs. And based on my previous research, I would suggest that Yiddish was developed as a secret language to assist in trade.

What happened next was that the Jewish empire began to collapse. By the tenth century, the Jews on the Black Sea migrated to Ukraine and Italy. Yiddish became the lingua franca of these Ashkenazic Jews and absorbed German words while maintaining the Slavic grammar. And as global trade moved to the hands of the Italians, Dutch and English, the Jews were pushed aside.

What this all shows is that by using modern genetic technology – that enables scientists to track the past of modern-day people – a new appreciation for Jewish ancestry can be discovered.

It has meant a greater understanding of the journeys these people took to arrive in Europe. It has also allowed for increased knowledge as to the significant role the Ashina and the Khazar clans – from which some of the real Jewish patriarchs actually came from – played.

By Eran Elhaik, Lecturer in population, medical and evolutionary genomics, University of Sheffield. He consults DNA Diagnostics Centre and was partially supported by an MRC Confidence in Concept Scheme award 2014-University of Sheffield to E.E. (Ref: MC_PC_14115). This article was originally published on The Conversation. Read the original article.