Kevin M. Folta
With the availability of Arctic Apples around the corner, there are a lot of questions swirling about how the browning is suppressed when the apple is exposed to air.   The browning process has great implications for the value of fruits and fruit products.  This natural discoloration leads to less consumption of fruit, as well as substantial economic loss and food waste.

There have been a lot of misleading articles on the Arctic Apple, and even some well-intended articles miss the mark.  In the interest of clarity, this article provides deeper explanation into the science behind the browning process, its historical genetic modifications, and the mechanism of silencing in the Arctic Apple.

The process of browning is mediated by an enzyme called polyphenol oxidase, or PPO.   The enzyme can take a variety of chemical precursors (such as catechol or 4-metholcatechol in apples) and convert them to other compounds that result in an unattractive fruit.  There are other nutritional composition changes as well, which generally are negative, yet minor. The biggest problem is that consumers don’t eat it if it is not perfect, and a few brown spots might deter a consumer from a fruit product.

The non-browning trait is nothing new.  The grapes that are dried down to make golden raisins lack PPO activity.  They arose from a spontaneous mutation in the Sultana grape variety, a variety used to make the traditional brown raisins.  That genetic modification happened in the early 1960’s. The silencing in grapes came from an unknown error caused by sloppy DNA replication, damage from radiation from the earth, or DNA mutations from the sun’s UV rays.  Time would show that the PPO enzyme is not processed correctly by the mutant grape, leading to less PPO activity.

A scientific team at the small company Okanagan Specialty Fruits genetically engineered an apple to exhibit decreased PPO activity.  How is that done?   The process is known as “gene silencing”. 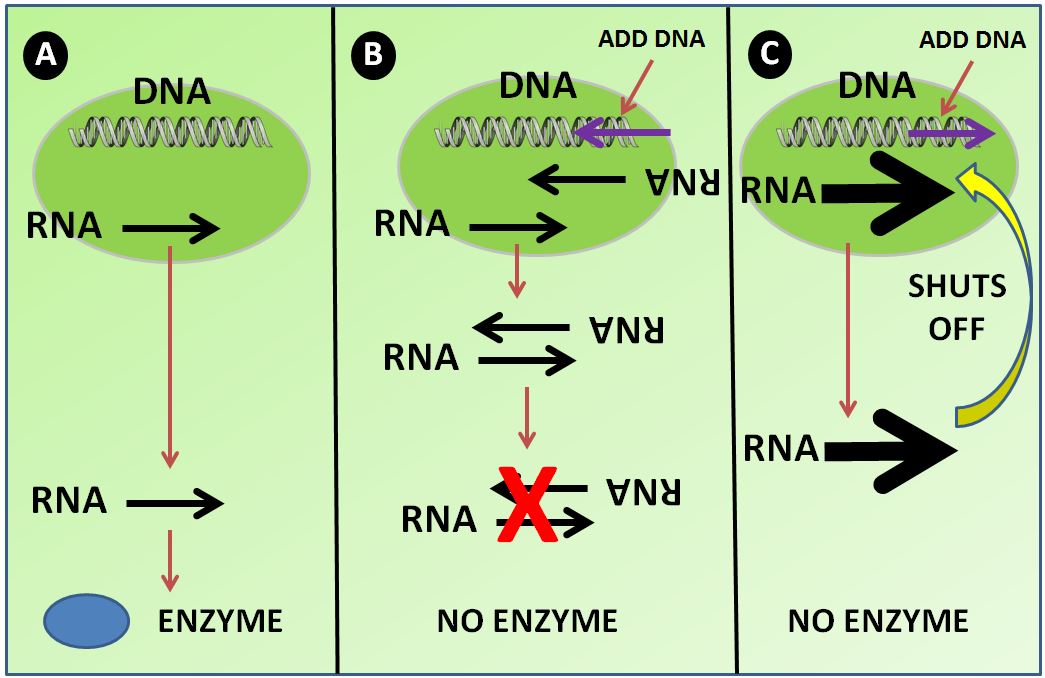 Central dogma of molecular biology, and gene silencing.  A. DNA encodes the information for the cell.  When a gene is activated the information is copied to RNA, an unstable intermediate that then is deciphered by the cell to make a protein, in this case the PPO enzyme.  B. Scientists can add a genetically engineered copy of a gene in the backwards orientation. When copied to RNA, the strand effectively cancels out the expression of the native gene. C.  Other times a gene can be turned on to a high level, and that causes the native gene (and the added gene) to be shut down and RNA intermediates removed. That's what happens in the Arctic Apple.

DNA is a durable double-stranded molecule tucked away in the nucleus of the plant cell.  The information in DNA is copied onto a single-stranded, unstable intermediate called RNA. RNA leaves the safety of the nucleus, carrying the coded information out into the main compartment of the cell where the information is used to guide synthesis of a specific protein, in this case the PPO enzyme. That's Panel A in the figure.

Gene silencing targets that RNA intermediate.  If you destroy it or interfere with it, its information is lost and the plant cell does not use the information it encodes.  In this case, no PPO enzyme.

Most of the time genetic engineers add a DNA sequence to the nucleus that produces the target sequence (in this case PPO) in the opposite direction to that of the native gene (see Panel B in the figure).  In other words, it creates a matching RNA strand that is a complement, like two sides of a zipper, to the normally single-stranded RNA molecule and its resident information.  Together the plant’s original RNA, and the introduced backwards RNA form a stable helical duplex that looks something like the DNA helix.  RNA duplexes are not really common except in very controlled situations, and when they happen in the cell it triggers a warning system that targets and degrades the double-stranded RNA.  That system then uses the sequence information in the degraded RNA to further target the same sequences.  It’s shown in the figure above.

In this case a backwards sequence of a gene is installed via genetic engineering. It produces backwards RNA sequence that will bind the native RNA, and trigger suppression of the product. This is called “antisense suppression”.

It also is possible to add the forward gene sequence, immediately next to the same sequence in reverse.  This approach forms RNA folds back on itself to form a double-stranded RNA “hairpin”.  This approach triggers a strong response because it creates the RNA duplex that the plant interprets as trouble. The plant then targets that sequence.

Both of these methods, antisense and hairpin-mediated suppression, are commonly used in labs all over the world in many different organisms.  The same effect also happens spontaneously in nature.

Neither of these methods describes the engineering of the Arctic Apple.

But What About the Arctic Apple?

In the Arctic Apple the gene encoding apple PPO is turned on at an extremely high level.  That’s pretty simple to do—but ironically, the high expression level feeds back and turns off the same gene! This is panel C of the figure.

It all started in the 1980’s when Dr. Rich Jorgensen’s lab wanted to make deeper purple petunias.  They turned on one of the genes limiting the production of the purple pigments at a super high level and the results were shocking.  Sometimes the flowers that should have been the deepest purple were coming out white as snow or with white patterns on purple flowers.  They called this “co-suppression” as the added gene and the native gene were both turned off. A new branch of science exploded!

This is what happens in the Arctic Apple.  The gene for PPO (actually four sequences, one for each member of the PPO family in apple—it has several copies) is turned on to such a high level that it triggers a mechanism in the plant to constrain its levels, turning it off.

Yes, you read it right.  It is turned on so high that it fails to make a product.

It sounds counter-intuitive, but think about it this way.  Cells have intricate surveillance systems that scan for large amounts of RNAs that could be interpreted as a viral attack.  The cell then shuts them down.  That might be the best way to think of it, even though there is technically more to the story.

This is an example of gene silencing, not much unlike what was used to decrease the papaya ringspot virus in that crop.  RNA silencing can be used to limit expression of unwanted traits—PPO, viruses, colors, even genes that cause susceptibility to plant disease.  The Arctic Apple offers a product that could bring more apples into the diet and better profits for growers. I’ve eaten them, and will be happy to buy them once they are available.

The complete details are presented in their petition to the regulators.  If you have any questions that you’d like answered, I’m glad to answer them.  kfolta at ufl dot edu!

Kevin’s complete record of funding and reimbursement can be seen at www.kevinfolta.com/transparency . He has never had any financial interactions with Okanagan Specialty Fruits, but did get a nice box of Arctic Apples once. Full disclosure- they were delicious.