This is the first of a series of articles on Huanglongbing (Citrus Greening Disease) that is devastating Florida. Subsequent articles will explore its causes, effects and potential cures.

When I started my job as a professor at the University of Florida in 2002, one of the simple joys was taking a drive through the state.  It seemed like everywhere I drove south of Interstate 4 there was a glorious aqua-blue sky that was the backdrop for dark-green foliage of Florida’s citrus industry.  The trees were lush and dense, and punctuated with bright orange fruits throughout the year. Over the next years I’d learn more about the products and people that define the Florida citrus industry.

At the same time I witnessed the creep of an insidious disaster.The citrus disease called Huanglongbing, literally Yellow Dragon Disease had developed a toe-hold in the south of Florida in 2005. The disease has been documented throughout the world, but it was new to Florida’s groves.  The problem is really a spectrum of symptoms that growers describe has HLB (short for Huanglongbing) or simply citrus greening disease. 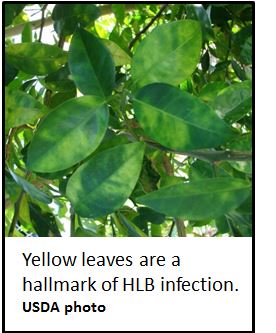 HLB stems from a bacterial infection within the plant’s vascular tissues. It induces a suite of discrete symptoms that beacon active infection, starting with blotchy yellow regions on leaves, discoloration of leaf veins, the death of the root system, defoliation, and eventual the demise of the tree.

But the path between infection and death is slow. Infected trees may not even show symptoms for years. Trees remain productive for several seasons, yet as the disease progresses they produce fewer fruits. The fruits they do produce are prone to fall off of the tree, and are not usable under food safety standards. The fruits that are retained are smaller, misshapen, do not fully ripen,and lack the normal flavors coveted by juice producers and fresh-fruit packers.

The disease is spread by an insect.  The Asian Citrus Psyllid (Diaphorina citri) is an insect smaller than a grain of rice. They are abundant in groves, and spread the disease by feeding on an infected tree and then migrating to an adjacent tree for their next meal.

HLB has been identified in every county that hosts citrus production. The disease causes lower yields, as well as increased costs to manage the living trees and removal of the dying ones.   Over the last twelve years  over 14,000 jobs have been lost.  Most small farms are out of business,representing over 130,000 acres of abandoned groves.  The disease has spread across other citrus-growing regions in the USA, and recently has been identified in California.

Currently there are no cures.  The most likely solution will come from a multi-faceted solution involving genetics and management. The most important part is likely improved tree genetics. Citrus trees are made of two parts, a scion- the top part, grafted to a rootstock.  It may be possible to find rootstocks or scions that can kill the bacterium, or even survive with an active infection.  Other approaches involve management of the psyllid, changes in fertilization and pruning, or even growing trees in large screen houses.  Plants have been genetically engineered to survive the disease, but deregulation is expensive and slow, so those potential tools are unlikely in the near future.

Right now thousands of growers and their partners in science are working daily to study the disease and identify solutions.  Over the next several weeks this special section of Science 2.0 will introduce you to the problem in more detail. You’ll learn of its devastating consequences, and the potential solutions being developed.

While citrus production is confined to a handful of states,orange juice and fresh citrus products are consumed throughout North America as a cornerstone of a diet rich in fruits and vegetables. More importantly, the agricultural regions that support the citrus industry are made up of people,people with generations of commitment to providing these fruits.  From pickers, to packers, to shippers, along with the many ancillary industries that feed into citrus, HLB has the potential to be a personal, economic disaster as well as a threat to fruit production.

This special section of Science 2.0 will introduce you to the Yellow Dragon Disease, as well as the people and the solutions that are confronting it.