Once again neuroscientists and physicists have teamed up to take brain imaging to a new level -- Supraresolution imaging.  This has the making of a great SciFi movie -- A team of researchers at Harvard University, led by Dr Bernardo Sabatini, combine laser imaging techniques, two-photon laser scanning microscopy (2PLSM) and continuous wave stimulated emission depletion (STED), to go where no human has gone before, peering deep into living brain slices to see nanoscale features of functioning neurons.

Ok, so they did not use the lasers to shrink themselves like Fantastic Voyage or Honey I Shrank the Kids, but it is still really cool.

Using 2PLSM&STEM imaging Sabatini's team showed that they can see features as small as 100nm deep in living brain tissue.  This is about 3 times better than just 2PLSM imaging.   How good is supraresolution imaging with STED&2PLSM?  It is the ability to see features of living neurons that are 2000-5000 thinner than a human hair.  Features like the shape of small spines on neuronal dendrites, proteins in a neuron, ion channels at a synapse, and biochemical microdomains in a dendrite. 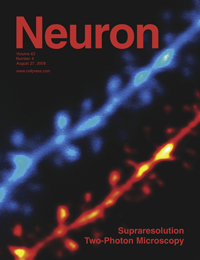 But 2PLSM&STED is much more than just higher resolution because it works for imaging living neurons.  All those fine features of neurons can be watched as they move and change when neurons are active.   Now neuroscientists can watch the smallest dendritic spines change shape when a neuron is active.  The spines are where excitatory synapses are made and they come and go over time, changing shape with activity at the synapse.  But until now it was impossible to accurately measure the change in shape and to figure out why spines change shape.

So how is nanoscale imaging of the living brain done?  Well let's consider the problem that the scientists had to overcome.  They had to figure out how to go beyond the diffraction limit, described in the nineteenth century by Ernst Abbe, who showed that resolution is limited by the wavelength of light and the numerical aperture of the lens (click here for a primer on numerical aperture in microscopy).   For imaging deep into the living brain neuroscientists have to use near-infrared (NIR) light (750-900nm) to penetrate into the tissue and water immersion lenses that have lower numerical aperture.

So the best resolution using only 2PLSM is about 400-500nm.  Not good enough to see the fine features of neurons and glia.

Along come the physicists who have developed several methods to image below the diffraction limit.  But most of the supraresolution imaging techniques only work for thin sections that do not scatter light.  Living brain slices have to be thick to keep the neurons and connection intact and brain tissue scatters light, a lot.

Luckily one of the supraresolution techniques, STED imaging,  is insensitive to scattering of photons and works with NIR light.  STED imaging uses 2 lasers, one to excite a fluorescent label and the second to turn off the fluorescence by forcing decay back to the ground state.  The first laser is focused at the center and using special optics the pattern of the second laser forms a doughnut around the center.

Fluorescence at the center is excited and in the doughnut around the center it is depleted. Using STED imaging the resolution is not limited by diffraction.

The group at Harvard combine STED and 2PLSM to image fluorescently labeled neurons in living brain slices.  They were able to resolve small spines close together on a dendrite and to clearly see fine details of the spines.

Stay tuned as neuroscientists start using Supraresolution imaging to take us on a fantastic voyage of discovering how neurons function.

Measuring the Mind
More Articles All Articles
About