Kathy Murphy
You may have noticed that a lot of posts about neuroscience research on scientificblogging.com describe new discoveries about the synapse.  If you are not a neuroscientists you might wonder why we get so fired up about the synapse (pun intended).

Well the answer is simple -- understanding how synapses function is the most important question in the field of neuroscience research.  And we are getting close to the answer.

For me what's so cool about the synapse is that they are constantly changing.

But I want to know what you think -- why do you think the synapse is a cool thing to study?  If you could ask a neuroscientists about their synapse research what would you want to know?

Let me know your questions then join us Wednesday July 14th at 8:30pm for a Fireside Chat about the Synapse that I will be moderating with 4 of the world's leading neuroscientists studying the synapse.  Go to livestream.com/minds  the free half hour discussion (Wed July 14 8:30pm EST).  You'll be able to watch the discussion live and even participate via the live chat window. 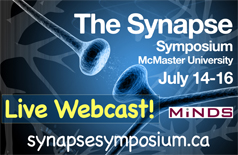 If you are really into learning about the synapse then join us on the web for the full symposium -- The Synapse Symposium.

Here's some background about the synapse.  A few factoids to fire up your synapses and get your synaptic plasticity mechanisms working.

At its most basic level the nervous system has 2 fundamental parts -- neurons make up the nervous part and synapses link the neurons into a functioning system.

Synapses are the communication links between neurons, they build the neural circuits that ultimately support all of our thoughts, behaviours, actions and feelings.  A breakdown in the functioning of synapses is the source of many neurological and psychiatric diseases.  These diseases cause synaptic changes that lead to over or under production of synapses, abnormal synaptic function, abnormal synaptic structure, and many more changes that make the brain function abnormally.  Furthermore, most drugs for mental illness target synapses.


All the red dots in the video above are synapses in a mouse cortex (the green branches are the dendrites of neurons).  It is an amazing video created by the group in the SmithLab at Stanford University that lets you fly through a piece of the mouse brain.

The term synapse was coined over 100 years ago by the British physiologist Charles Sherrington.  It comes from the Greek word to clasp -- καρφίτσα -- and was first used by Sherrington in 1897 in his chapter in the Textbook of Physiology.

A synapse is a very tiny structure, it is about 1 micron in diameter, which is 1000 times thinner than a piece of paper.  There are 2 parts to a synapse: a pre-synaptic side where the neurotransmitters are made, stored, and released; a post-synaptic side with receptors that receive the neurotransmitter and allow ions to flow into the post-synaptic neuron to change the electrical potential (depolarize), transmit the signal between neurons, and cause the neuron to fire.  The gap between the 2 sides of the synapse is extremely small, just 20 nanometers, which is 50,000 time thinner than a piece of paper.

The Canadian Psychologist Donald O. Hebb and his colleague Jerzy Konorski were the first to use the term plasticity to describe how the brain change in response to a stimulus.  We now know that it is the synapses are the main site of plasticity in the brain. Each of our synapses is like a tiny computer processor that can run many different programs depending on the situation.  They change in response to the firing patterns of neurons, leading to the strengthening of some synapses and weakening others.   Also synapses are not permanent, they come and go.  They are constantly being generated and lost, a process that can be watched with specialized high resolution imaging of neurons.

The tiny size, large number, and molecular complexity of the synapses is truly mind boggling.
Despite all that complexity neuroscientists are breaking through and making significant steps to understanding the synapse.  Recent advances in molecular biology techniques that let us label and manipulate synaptic synaptic proteins, along with ultra-high resolution imaging that can record synapses in action, have revolutionized studying the synapse.   We are on the brink of being able to translate our understanding about the synapse into new more effective treatments for mental illness, neurodevelopmental disorders, and neurological disease.

Studying these dynamic little engines in our brains still has a lot of challenges but the potential payoff is well worth the investment that neuroscientists are making to unlock the secrets of the synapse.

So put your synapses to work and let me know what questions you would like to ask the experts.   Then join us on the web to learn more about the synapse.
Measuring the Mind
More Articles All Articles
About