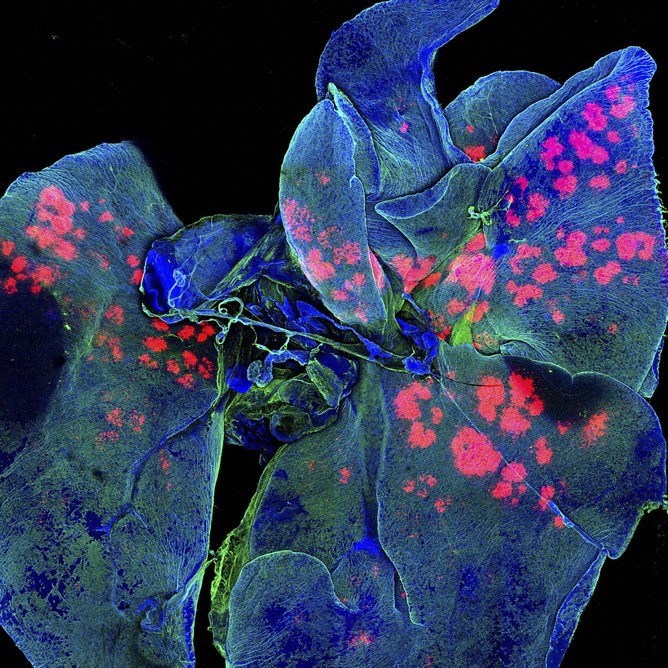 Since they were pioneered by Robert Hooke 350 years ago, microscopes have been extending our vision. In the 21st century, scanning electron microscopy (SEM) and confocal microscopy, which uses a pinhole to remove out-of-focus light and allows 3D structures to be built from multiple images, have pushed the boundaries of resolution.

Further still, nanoscopes that use fluorescence to circumvent limitations in SEM are already winning Nobel prizes.

The Wellcome Images Awards 2015 are a showcase of the best in science imaging techniques, and this year’s crop of winners gives a rich glimpse into a world normally unseen by the human eye. And as we learn more about the intricacies of our bodies and the world around us, the images transform abstract ideas and the constantly moving machine of our bodies into works of art and visual drama. Four nominees for this year’s prize tell us how they got their image. We have been perfecting a technology for imaging the metabolism of cells. The core principle is microscopically visualising arrays of up to a dozen different small molecules and computationally fusing these into readable colour images. The molecules are detected by immune probes developed in my laboratory and each mixture of molecules forms a cellular “signature” colour.

The molecules in this image are mapped into image colour channels: aspartic acid as red, glutathione as green and glutamine as blue. Aspartic acid links amino acid and energy metabolism. Glutathione is our primary defence against oxidative damage. Glutamine is a molecular “battery” that stores and distributes amino groups to other molecules.

The image is a thin slice through the various kinds of filtering cells of the mouse kidney. Surprisingly, the images reveal that all tissues, not just kidney, are rainbows of different cell types, each with a unique metabolism. This contradicts our expectation that metabolism is roughly the same in all cells and opens the door for a new generation of molecular tests of cell state in health and disease. Though the kidney yields a spectacular and fiery display, we have yet to craft a theory that explains it.

This image is one in a series we captured to examine the distribution of engineered, micrometer-sized drug particles (red) targeted to mouse lungs (blue, green). Scale in science and engineering is fascinating, and as technology has advanced, we’ve increased our ability to take both smaller and larger images with detail and range. Using fluorescent imaging and a confocal laser microscope, we imaged whole lungs at different times to determine where drug particles go.

Information at the organ scale is important when designing particles to obtain even, specific and prolonged delivery of drugs throughout the organ. We can now use whole organs (as opposed to traditional thin slices of tissue on glass slides) to image distribution at this level while also acquiring information about smaller details. This same set of images (more than 1,000 total condensed into a single 2D image) can be made into an interactive 3D model where we can zoom in and out of the organ to find out where our particles are aggregating and distributing, potentially down to single cells.

Speaking as both a scientist and an artist (avid photographer and writer), there is a great deal of overlap between the two areas. Science, technology, engineering, and math (STEM) are often set apart from other fields, particularly arts and humanities. In reality, there is so much art in STEM: the visual beauty of an experiment image is not unlike a moving painting or photo; the elegance of manuscript text can rival that of the best prose. Ultimately, innovative scientific research is driven partially by the same intuition that often drives and inspires great art. Striking visuals are just one way for us to stir curiosity in everyone about the work that we love. This is an image of a single Purkinje cell in the cerebellum captured using a focused ion beam scanning electron microscope. This kind of electron microscope is relatively new to biology, and uses two beams to image neurons within a block of brain tissue: the first beam etches away the top few nanometers of tissue, and the second beam then captures the image. In this way, neurons and circuits can be imaged at extremely high (nanometer) resolution, while keeping the block of tissue intact (without the loss of resolution and distortions resulting from conventional knife-based sectioning of tissues for electron microscopy).

I find this image endlessly fascinating: not only does it reveal the incredible richness and complexity of the dendritic tree of an important cell type (the processing carried out by Purkinje cells is crucial for precisely timed learned movements); but it also exhibits a beauty that is both ethereal yet precise, like a Japanese woodcut. The blood-brain barrier is a protective layer of cells that regulates entry of molecules to the brain. Despite acting as a protective mechanism, it also acts as a barrier to delivering drug therapies to the brain. Astrocytes, specialised star-shaped glial cells (non-neuronal cells that support and protect), outnumber neurons over fivefold. These cells contiguously tile the entire central nervous system (CNS) and exert many essential complex functions.

Astrocytic tumours are the commonest type of cancer of the brain. Over the past 40 years systems to deliver drugs to treat these cancers have emerged. Carriers that have been investigated have ranged in size from 10 to 1,000 nanometres. One example of such carriers is a carbon nanotube, a hollow cylinder made from a continuous unbroken hexagonal mesh of carbon molecules, first explored by electron microscopist Sumio Iijima in 1991.

Our image is a scanning electron micrograph of an astrocyte cell (coloured in brown), with a diameter of about 20 micrometers, and captured in the process of taking up carbon nanotubes (green colour). New approaches to brain drug delivery will be the key to unlocking the brain and tackling neurological disorders that would otherwise remain incurable.

Best of the rest Elderly woman with Kyphosis (curvature of the spine) Mark Bartley

Cutting-edge imaging techniques may delve into the smallest worlds but photographs still powerfully capture our dramatic outer shell as this clinical photograph of an elderly woman’s curved spine shows. If you’ve never eaten tripe but have wondered what a stomach looks like, here’s an image of one taken from a goat. A scanning electron micrograph of a greenfly’s eye. Natural killer (NK) cells in our immune system are at the frontline of our immune response and are rapidly deployed by the body to fight infections or growing tumours. By Robert Marc, Distinguished Professor of Ophthalmology at University of Utah Gregory Szeto, Postdoctoral Fellow at Massachusetts Institute of Technology, Khuloud Al-Jamal, Senior Lecturer in Nanomedicine at King's College London, and Michael Hausser, Professor of Neuroscience and Wellcome Principal Research Fellow at UCL. This article was originally published on The Conversation. Read the original article.