News Staff
It's been known since the 16th century that neurons and blood vessels often traverse the body side by side but it was only more recently discovered that the growth of neuronal and vascular networks is controlled by the same molecules.

“Most interesting is the interaction between neurons and blood vessels in the cerebral cortex. To date, we know very little about how neurons communicate with endothelial cells in order to structure a functional network in the brain.” explains Prof. Dr. Amparo Acker-Palmer, who plans to assess these processes in the layering of the cerebral cortex during embryonic development.

During that time, neuronal cells migrate in an inside out manner, while blood vessels grow in the opposite direction, from the pial surface towards the ventricular surface. Since these two growth processes are coordinated, Acker-Palmer suspects that they are controlled by the same signaling molecules. 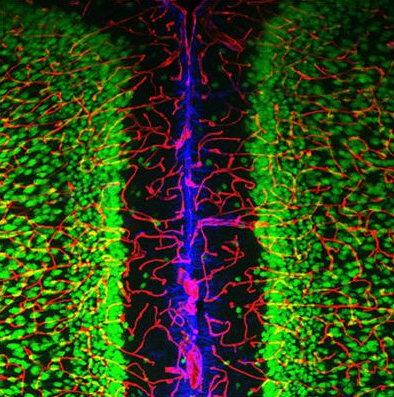 The microscope image of a mouse brain illustrates the close interaction between neurons (green), astrocytes (blue), and blood vessels (red) in the brain. The various cell populations appear in a specific pattern and interact with the neighboring cells. Credit: Goethe-Universität Frankfurt am Main

How dysfunction in the crosstalk may lead to cognitive impairments is one of the focuses of her research.

As model organisms her team uses genetically altered mice and zebrafish. Translucent zebrafish are the best suitable vertebrate model to visualize in vivo the dynamic events of cell-to-cell communication at the neurovascular interface. High-resolution electron microscopes will also be used to study these close connections between endothelial cells in the blood capillaries and glial cells at the blood-brain barrier.

Glial cells wrap around the blood capillaries and prevent harmful substances from the blood stream from entering the brain.

Acker-Palmer and her team aim at deciphering the molecular signaling pathways regulating the neurovascular interface. “If we can intervene in the mechanism and temporarily open the blood-brain barrier, we can insert active agents and find new approaches for treating dementia and mental illness,” says the neurobiologist.