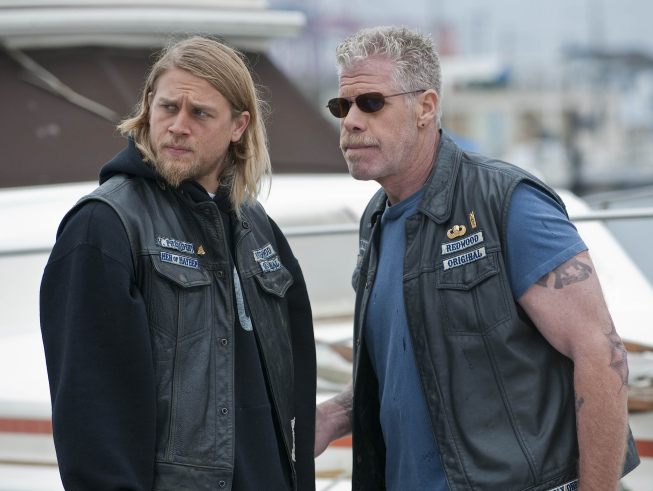 Watching almost any episode of FX's Sons of Anarchy, you can’t help but notice that Jax, the young biker protagonist, is a bit of a stud. There's always some vixen falling for his patched,  faded, hairy, tattooed charms. He’s handsome, but not wealthy or powerful, and he's a criminal and murderer who would, in real life, probably spend years behind bars. Hard to imagine him as the ideal mate.

Yet as we've all heard by now, high-testosterone males (like Jax) are attractive to a woman as genetic fathers, not as co-parents who help raise children and act as partners. High-T males are the strongest, most confident, and most successful, and so would pass these traits on to her offspring. But high-T males are also more aggressive, abusive, and likely to cheat. That is, they are the worst choice for actually raising her children.

There is evidence that women are biologically-programmed to react to men in this way. Most days, women prefer to be around safe, friendly low-T males. But when a women is ovulating, her choice flips, and suddenly she prefers to be around high-T males. Our evolutionary history—which favored strong, aggressive males—is subconsciously influencing her to mate with the most testosterone-fueled male. Hence the stereotype that women are attracted to troglodytes like Jax.

By this point, if you’re a straight male, you might be sighing at another piece of “evidence” that nice guys finish last. Society (or, at least, advertising) has seized on the idea of some lost “guy code” of testosterone, beer, and boorishness that will score you babes if only you’re willing to break out with the caveman antics. But there is other research which shows hat things are a great deal more complicated than the “alpha male” paradigm might lead us to believe.

There is some indication that high testosterone is correlated with lower intelligence, at least in steroid users, and this is born out by the fact that women do not just (subconsciously) prefer
hulking Neanderthal bikers, but in fact often select mates based on intelligence indicators such as language skills, humor, and artistic/musical abilities. And in a recent study regarding testosterone and new fathers, researchers noted that the levels of testosterone in these men dropped significantly after the babies were born.

The act of caring for children, it appears, inherently lowers the testosterone in men, who may be as hard-wired for nurturing as for hunting, fighting, and rutting. Testosterone levels (and men themselves) are much more flexible and malleable than previously assumed. Watching his sports team win on television boosts a man's T-level as much as 20 percent within ten minutes, and even taking a dominating posture has a measurable effect on testosterone. As has been shown time and time again, humans are nothing if not adaptable.

So let’s look at an outlaw biker like Jax a few years down the line, when one of his partners has his baby. He might still look the “bad boy” in tattoos and boots, but Daddy Jax will not be the same hormone-charged stud he was at his supposed apex. Nature has a way of ensuring that even the high-T male’s offspring survives, and part of it is adapting him to best provide for it.

Our hormones naturally shift to make us better at completing new tasks and fulfilling new roles, part of what makes Homo sapiens that most versatile of species. We are controlled to a large extent by our evolutionary history, but the effects of that background are much more subtle and complex than we might think.