For the first time, NASA scientists have used a shrewd spaceborne detective to track the origin and movement of water vapor throughout Earth's atmosphere. This perspective is vital to improve the understanding of Earth's water cycle and its role in weather and climate.

For the first time, NASA scientists have used a shrewd spaceborne detective to track the origin and movement of water vapor throughout Earth's atmosphere. This perspective is vital to improve the understanding of Earth's water cycle and its role in weather and climate. 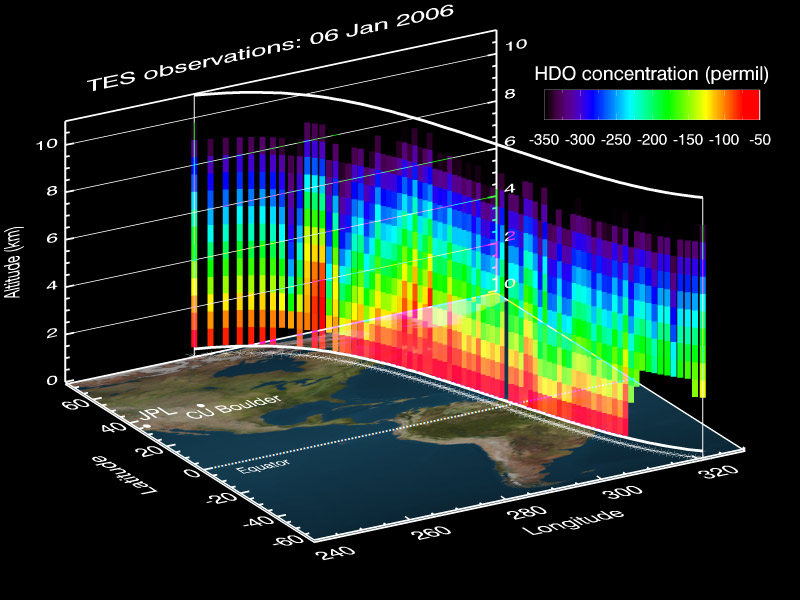 NASA's newest detective in the mysteries of atmospheric water vapor is the Tropospheric Emission Spectrometer instrument on the Aura satellite. A team of scientists from NASA's Jet Propulsion Laboratory, Pasadena, Calif., and the University of Colorado, Boulder, used the instrument's observations of heavy and light water vapor to retrace the "history" of water over oceans and continents, from ice and liquid to vapor and back again. Heavy water vapor molecules have more neutrons than lighter ones do.

By analyzing the distribution of the heavy and light molecules, the team was able to deduce the sources and processes that cycle water vapor, the most abundant greenhouse gas in Earth's atmosphere.

The team found that tropical rainfall evaporation and water "exhaled" by forests are key sources of moisture in the tropical atmosphere. They noted that more water than they had expected is transported over land rather than ocean into the lower troposphere (Earth's lowermost atmosphere), especially over the Amazon River basin and tropical Africa.

"One might expect most of the water to come directly from the wet ocean," said study co-author Dr. David Noone of the University of Colorado. "Instead, it appears that thunderstorm activity over the tropical continents plays a key role in keeping the troposphere hydrated."

The team found that in the tropics and regions of tropical rain clouds, rainfall evaporation significantly adds moisture to the lower troposphere, with typically 20 percent and up to 50 percent of rain there evaporating before it reaches the ground. The atmosphere retains this water, which can be used to make clouds. The strength and location of this evaporation give scientists new insight into how water in Earth's atmosphere helps move energy from Earth's surface upwards. The main role of the atmosphere in Earth's climate system is to take energy deposited by the sun and dispose of it back into space.

The team also found evidence that water transported upwards by thunderstorm activity over land originates from both plant "exhalation" in large forests and evaporation over nearby oceans. The balance between these two different sources tells us how vegetation interacts with climate and helps maintain regional rainfall levels.

"This link between vegetation, hydrology and climate has implications for how societies choose to manage their ecological resources," said Noone. "Our measurements provide a baseline against which future changes in vegetation-climate interactions can be measured."

The details of this journey are critical for understanding clouds and climate, as well as changes in precipitation patterns and water resources, Noone explained. "Our study measures the conditions under which precipitation and evaporation occur, providing insights into the processes responsible. Better knowledge of these processes ultimately leads to a clearer understanding of the factors that drive the global water cycle and its importance in climate and global climate change."

Noone and his co-authors said there has been a general lack of information on the way water moves around in Earth's atmosphere – where it comes from and where it ends up.

"Since we measure the history of water, so to speak, we can tell the difference between air masses that have undergone extensive condensation from those that are more dominated by evaporation from the ocean surface," said study co-author Dr. John Worden of JPL.

"These results also lay the groundwork for research to help interpret the isotopic measurements that scientists use to study Earth's climate in the past," added JPL co-author Dr. Kevin Bowman.

Study results appear in the February 1 issue of the journal Nature.

For more on the Tropospheric Emission Spectrometer, visit: http://www.nasa.gov/aura and http://tes.jpl.nasa.gov/ .

JPL is managed for NASA by the California Institute of Technology in Pasadena.