Stem cells are generally assigned to one of two categories: embryonic or adult. Some researchers say that may be an oversimplification and a new University of Michigan study states that stem cells in the developing fetus are distinct from both embryonic and adult stem cells. 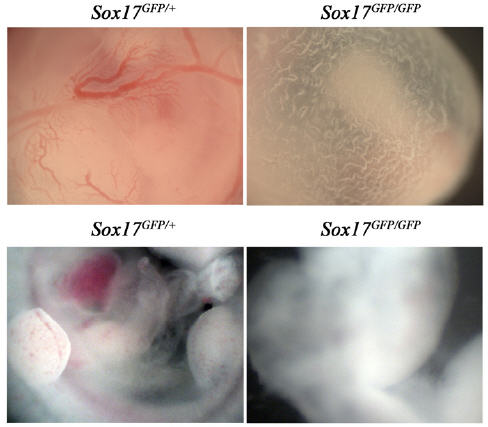 Sox17 Is Required for Hematopoiesis in the Fetal Liver and Yolk Sac. The yolk sac(A)and fetal liver(B) of E11.5 embryos contained obvious blood cells in Sox17GFP/+ embryos but not in Sox17GFP/GFP littermates. The numbers of CD45+ hematopoietic cells and Ter119+ erythroid cells in E11.5 yolk sac and whole embryo were significantly (*, p < 0.05) reduced in Sox17GFP/GFP embryos as compared to Sox17GFP/+ and Sox17+/+ embryos. Source: Sox17 Dependence Distinguishes the Transcriptional Regulation of Fetal from Adult Hematopoietic Stem Cells, Cell Online.

The Sox 17 study is part of a larger, ongoing University of Michigan effort to understand how stem cells are regulated at different stages of life. Last September, Sean Morrison's team, which also led this research, reported that old stem cells don't simply wear out; a gene called Ink4a actively shuts them down.

"Each time we identify one of these genes, we get a new insight into what stem cells really are, what regulates their identity and how their age-specific functions work," Morrison said.

Stem cells generate all of the tissues in the developing human body and later in life provide replacement cells when adult tissues are damaged or wear out. Stem cells that form blood and immune-system cells are called hematopoietic stem cells.

In follow-up experiments, mice were irradiated to destroy their blood-forming stem cells. Then replacement fetal or neonatal blood-forming cells were transplanted into the mice---some containing the Sox17 gene and others lacking it. The mice that received Sox17-bearing cells were able to regenerate their blood systems. Those that received cells lacking Sox17 could not.

"Sox17 is really a critical player," Morrison said. "If you knock it out in mice, they never develop a blood system. They never form blood cells."