Researchers at the Yerkes National Primate Research Center, Emory University, have found bonobos and chimpanzees use manual gestures of their hands, feet and limbs more flexibly than they do facial expressions and vocalizations, further supporting the evolution of human language began with gestures as the gestural origin hypothesis of language suggests. 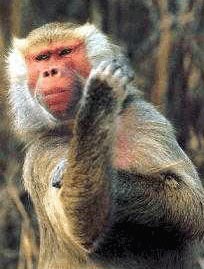 Now we know where we got it from.

Working with two groups of bonobos (13 animals) and two groups of chimpanzees (34 animals), Yerkes researchers Amy Pollick, PhD, and Frans de Waal, PhD, distinguished 31 manual gestures and 18 facial/vocal signals. They found both species used facial/vocal signals similarly, but the same did not hold true for the manual gestures. Rather, the researchers found both within and between species the manual gestures were less closely tied to a particular emotion and, thereby, serve a more adaptable function. For example, a single gesture may communicate an entirely different message depending upon the social context in which it is used.

"A chimpanzee may stretch out an open hand to another as a signal for support, whereas the same gesture toward a possessor of food signals a desire to share," said Pollick. "A scream, however, is a typical response for victims of intimidation, threat or attack. This is so for both bonobos and chimpanzees, and suggests the vocalization is relatively invariant," Pollick continued.

By studying similar types of communication in closely related species, researchers are able to determine shared ancestry. We know gestures are evolutionarily younger than facial expressions and vocalizations, as shown by their presence in apes and humans but not in monkeys. "A gesture that occurs in bonobos and chimpanzees as well as humans likely was present in the last common ancestor," said Pollick. "A good example of a shared gesture is the open-hand begging gesture, used by both apes and humans. This gesture can be used for food, if there is food around, but it also can be used to beg for help, for support, for money and so on. It's meaning is context-dependent," added de Waal.

Looking for further distinctions between species, the researchers found bonobos use gestures more flexibly than do chimpanzees. "Different groups of bonobos used gestures in specific contexts less consistently than did different groups of chimpanzees," said Pollick. The researcher's findings also suggest bonobos and chimpanzees engage in multi-modal communication, combining their gestures with facial expressions and vocalizations to communicate a message. "While chimpanzees produce more of these combinations, bonobos respond to them more often. This finding suggests the bonobo is a better model of symbolic communication in our early ancestors," concluded Pollick.