News Staff
In releasing its latest comprehensive report, the Intergovernmental Panel on Climate Change (IPCC) focuses an important spotlight on the current state of the Earth’s climate.

Climate change is just one of the many symptoms exhibited by a planet under pressure from human activities. "Global environmental change, which includes climate change, threatens to irreversibly alter our planet," says Kevin Noone, Executive Director of the International Geosphere-Biosphere Programme (IGBP). 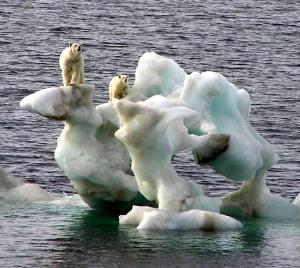 Polar bear on ice. (Image Credit: Dan Crosbie, courtesy of Canadian Ice Service / Environment Canada)
Global studies by IGBP show that human-driven environmental changes are affecting many parts of the Earth’s system, in addition to its climate. For example:
"The IPCC report, with its interdisciplinary approach to climate change, is a clear example of how the Earth needs to be considered as a coupled system in order to understand global environmental change," says Noone. “The study of the Earth as a system, looking not only at climate but also at changes in the oceans and on land, how those changes affect each other, and the role of humans as part of that system is a crucial approach to managing a sustainable planet,” he says.
An integrated Earth System Science approach can provide critical insights into the feasibility, risks, trade-offs and timeliness of any proposed strategy to respond to global environmental change, explains Noone. He notes that the current IPCC report reflects the importance of Earth System Science in its analysis of climate change.
Earth System Science emphasises observing, understanding and predicting global environmental changes involving interactions between land, atmosphere, water, ice, biosphere, societies, technologies and economies, at broader temporal and spatial scales. IGBP research encompasses all of these Earth System components and then synthesizes international, multidisciplinary observations to enhance scientific understanding.
"An Earth system perspective is crucial to understanding global environmental change since global biogeochemical cycles and the physical climate are strongly coupled. Predicting the evolution of this interactive system under global perturbations by human activities is key for the sustainability of Planet Earth" said IGBP Chair Carlos Nobre of the Centro de Previsão de Tempo e Estudos Climáticos and the Instituto Nacional de Pesquisas Espaciais in Brazil. Researchers from IGBP’s network of Earth System Scientists who authored chapters of the IPCC report have this to say about the role of Earth System Science:
Guy Brasseur, IPCC WGI Chapter 7 Coordinating Lead Author (Director, Earth and Sun Systems Laboratory, and Associate Director, National Center for Atmospheric Research): The IPCC report recognizes the importance of the strong feedbacks that exist between biogeochemical cycles and the climate system, and in particular stresses the fact that additional carbon released from the biosphere in a warmer climate will enhance climate change during the 21st century further than the changes that will result from fossil fuel emissions alone.
Kenneth Denman, IPCC WGI Chapter 7 Coordinating Lead Author (Senior Scientist, Canadian Centre for Climate Modelling and Analysis, University of Victoria): The IPCC climate models have started down the road towards becoming Earth System models, because some of the models used in the AR4 projections now include dynamic carbon cycling. Over the next few years these models will include, for example, ever more complex dynamic land use change. As that happens, aspects of human behaviour will be included in these models, requiring participation of the many scientists working on IGBP projects of the Earth System. These models will then become useful for probing the other important areas in which human behaviour is changing our Earth and environment, especially those with complex interactions with the climate system.
Corinne Le Quéré, IPCC WGI Chapter 5 Lead Author (Associate Professor, University of East Anglia and Research Fellow, British Antarctic Survey): Evidence presented in the IPCC clearly shows that climate is changing. We also need to look more closely at what else is changing in addition to climate. For instance, the oceans and the terrestrial biosphere slow down climate change by absorbing half of the CO2 emitted to the atmosphere, but how long will this continue? We have evidence that these natural CO2 sinks are weakening in many regions of the world. We need to look at the Earth as a whole, and include the full interactions between climate, the biosphere, and humans.
Paulo Artaxo, IPCC WGI Chapter 2 Lead Author (Professor, Institute of Physics, University of São Paulo, Brazil): The latest IPCC assessment report confirms the critical changes that the climate of our planet is undergoing, and the potential socio-economical impacts on Earth society certainly will be huge. It emphasizes that we need to reduce greenhouse gas emissions as soon as possible. Only with an approach that looks to our planet in an integrated way can we address this critical task. The environmental stress in all pieces of our planet will be big, and Earth Science will have to work together with policy makers to mitigate and help the adaptation to the effects of climate change. Note: This article has been adapted from a news release issued by International Geosphere-Biosphere Programme / Royal Swedish Academy Of Sciences.
News Articles
More Articles All Articles
About