Astronomers from the University of Virginia and other institutions have found that Enceladus, the sixth-largest moon of Saturn, is a “cosmic graffiti artist,” pelting the surfaces of at least 11 other moons of Saturn with ice particles sprayed from its spewing surface geysers. This ice sandblasts the other moons, creating a reflective surface that makes them among the brightest bodies in the solar system (Enceladus, itself a ball of mostly ice, is the single most reflective body in our solar system).

“Enceladus’ art is a work-in-progress, constantly altering the surfaces of other moons orbiting within this moon’s beautiful swirl of ice particles,” said Anne Verbiscer, a research scientist in the astronomy department at the University of Virginia and the study’s lead investigator. “We’ve dubbed Enceladus a graffiti artist because of its ability to alter the appearance of the other moons.” 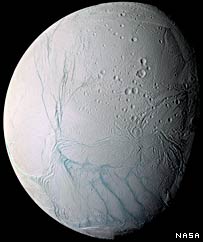 A paper about her and her colleagues’ findings appears in the Feb. 9 issue of the journal Science.

The ring of ice particles Enceladus forms around Saturn is known as the E-ring. At least 11 other moons orbit within the E-ring and are constantly subjected to high velocity collisions with Enceladus’s icy wake.

A series of geysers at Enceladus’s south pole continually erupt, ejecting ice particles, spewing a swirling wispy trail in the moon’s wake and ultimately forming a cloudy ring of ice particles. The ring is added to over and over as Enceladus repeats its orbit. The particles may persist for thousands of years, until they collide with one of the embedded moons, including Enceladus as it flows through its own emissions.

“We asked ourselves why those other moons in the E ring are so bright, though they are not geologically active like Enceladus? The answer, we now know, is that the other moons are being ‘sand-blasted’, so to speak, by the ice particles ejected from Enceladus,” Verbiscer said. “These are physical characteristics not previously known.”

Verbiscer added that Enceladus is of great interest to astrobiologists who believe primitive microorganisms could, in theory, exist beneath the surface of that moon because of the existence of liquid water below the surface.

Planetary astronomers are particularly interested in Enceladus because of its geological activity. At 314 miles in diameter, Enceladus is nearly seven times smaller than the Earth’s moon. But unlike our moon, Enceladus is continually changing as its geysers spew ice and liquid water, the likely result of heat and pressure deep within.

The surface of Enceladus is quite young, possibly less than 100 million years. It is the sixth largest moon of the more than thirty known moons that orbit Saturn. Because of its icy surface, Enceladus has the highest albedo, or surface reflectivity of any body in the solar system. Astronomer William Herschel discovered the moon in 1789.

The satellite’s surface of ice includes smooth areas of plains, ice vents, ridges and long lines of cracks at its south pole. The cracks are the source of the ice plumes released from the body that escape into its orbit, trailing and accumulating in its path, creating a highly visible cloudy ring around Saturn.

Enceladus is named for a Roman and Greek mythological giant who was considered responsible for volcanic fires on Mt. Etna in Sicily. “That analogy certainly holds true with the realization that Enceladus is geologically active and spraying ice particles out of its south pole,” Verbiscer said. “But we’ve extended the gigantic influence that it has, because of its ability to alter the appearance of its neighboring moons.”

Verbiscer’s co-investigators are Richard French of Wellesley College, Mark Showalter of the SETI Institute and Paul Helfenstein of Cornell University.

Note: This article has been adapted from a news release issued by University of Virgina.