Buried beneath a sulfurous cauldron in European seas lies a class of microorganisms known as “extremophiles,” so named because of the extreme environmental conditions in which they live and thrive. Almost as radical, perhaps, is the idea that these organisms and their associated enzymes could somehow unlock the key to a new transportation economy based on a renewable biofuel, lignocellulosic ethanol. 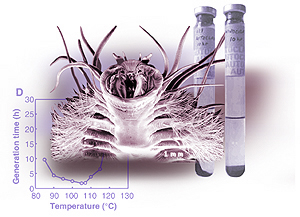 They're called extremophiles for a reason. Courtesy: University of New South Wales

That’s the concept behind an internally funded research program at Sandia National Laboratories, now in its second year. As researchers search for ways to process cellulosic biomass cheaply and efficiently for the production of lignocellulosic ethanol, the Sandia project aims to successfully demonstrate various computational tools and enzyme engineering methods that will make extreme enzymes relevant to the technical debate.

Blake Simmons, a chemical engineer and project lead at Sandia’s Livermore, Calif., site, says that the primary hurdle preventing lignocellulosic ethanol from becoming a viable transportation fuel is not the availability of lignocellulosic biomass, but rather its efficient and cost-effective processing.

“Production is not a concern. More than a billion tons of biomass is estimated to be created each year in the timber and agricultural industries, as well as a variety of grasses and potential energy crops,” says Simmons. “Unfortunately, you can’t just take a tree trunk, stick it into an enzymatic reactor, and ferment the sugar produced into ethanol with any kind of efficiency. The process of turning certain lignocellulosic materials into ethanol is very difficult and costly.”

Continuing with the tree trunk analogy, Simmons says the laborious process typically begins by chopping the biomass to reduce its size and then delivering it into a dilute acid pretreatment reactor. The reactor then would break down the biomass into cellulose, hemicellulose, and lignin. The hemicellulose and cellulose polymers released from the biomass must go through additional processing and acid neutralization before the final product is recovered and placed back into an enzymatic reactor to deconstruct the polymers into fermentable sugars. Not exactly swift and efficient, says Simmons, and very costly.

Enter enzymes isolated from extremophiles, which may solve this vexing processing riddle. Sandia’s current biological object of interest, said Simmons, is Sulfolobus solfataricus, an organism whose extreme enzymes were isolated and discovered years ago by the German researcher Georg Lipps. Sulfolobus expresses cellulase enzymes that are known to exist in organisms that prosper in sulfuric acid environments and, through an inexplicable quirk of nature, efficiently break down cellulose into sugars.

“Biology generally likes sugar,” said Simmons, “since it offers an easy energy intermediate that can be converted into some usable output.” The Sandia team members, he said, are apparently among a handful of researchers looking at enzymes expressed by Sulfolobus and manipulating them in the laboratory with the objective of processing biomass into cellulosic ethanol.

Extreme enzymes, Simmons said, can be found in a variety of locales, including hot springs, gold mines, and even within the rust found under a leaking hot water heater.

While other researchers are examining common biomass sources and attempting to express their enzymes at higher temperatures and lowered pH, Sandia has, in effect, taken the opposite approach.

“Instead of trying to create an extremozyme from sources that live in rather benign environmental conditions, why not just manipulate a real one isolated from its natural state"” asks Simmons. Sandia, he said, has brought the DNA that produces these extreme enzymes into the lab, where researchers then employ a technique called “site-directed mutagenesis” to manipulate and optimize the enzymes’ genetic sequence in hopes of improving performance. These mutations are identified using computational modeling techniques at Sandia that compare the structure and sequence of the extremozymes with their more benign counterparts to identify key genetic sequences of interest.

“The ultimate dream — and it’s only a dream right now — would be to take a poplar tree, put it into a tank, let it sit for three days, then come back and watch as the ethanol comes pouring out of the spigot,” says Simmons. “Though we’re probably decades away from that, this project aims to consolidate the pretreatment steps and get us one step closer to realizing that vision.”

The benefits of developing biomass-to-ethanol technology are well-known, says Grant Heffelfinger, senior manager for molecular and computational biosciences at Sandia’s Albuquerque, N.M., site and the lab’s lead on biofuels programs. He points to increased national energy security, reduction in greenhouse gas emissions, use of renewable resources, and other oft-cited advantages. “But corn ethanol must compete with food markets, leaving lignocellulosic ethanol as the fuel most likely to make the most meaningful short-term impact in reducing gasoline’s stranglehold on the transportation sector,” said Heffelfinger.

Although the end product with cellulosic ethanol and corn ethanol is the same, Simmons points out, the difference is in the complexity of the starting material. While corn is a simple, starch-based material that is easily processed into fermentable sugars, cellulosic biomass consists of a cellulose polymer, wrapped within a complex vascular structure of lignin and hemicellulose and other components.

“Because lignocellulosic biomass is such a multifaceted material, we need to have a fundamental understanding of how it works,” said Simmons. While various industry researchers, he said, are investigating new technologies and facilities that will allow for the processing cellulosic biomass into ethanol, he and his Sandia colleagues are hopeful that their method can be efficiently and cheaply integrated with current and future pretreatment steps. “We believe extremophile enzymes — and the technology that demonstrates how to use them — can be a very powerful resource for the research and industrial community to draw upon,” he said.

Simmons presented his team’s preliminary findings from the extremophile project recently at the 4th World Congress on Industrial Biotechnology & Bioprocessing. The team hopes to publish more advanced findings soon and is finalizing several proposals that could lead to further funding. The lab would be open, Simmons said, to conducting collaborative R&D with other commercial partners or research entities, or to licensing its research capabilities.

This and other efforts at Sandia National Laboratories are expected to be a vital component of the Joint Bio-Energy Institute (JBEI), a multilab/university effort to bring a Department of Energy-funded bioresearch facility to the San Francisco Bay Area. Sandia is planning a key role in that facility, which will focus on cost-effective, biologically based renewable energy sources to reduce U.S. dependence on fossil fuels.

“We believe the use of enzyme engineering to enable the next generation of ethanol biorefineries, with a focus on extremophile enzymes, is a realistic and achievable goal,” said Simmons. “But we need others to believe, too.”