On the eve of the 62nd anniversary of the world's first atomic explosion, the Trinity atomic bomb test, a CDC-led study team has reported new insights on the radiation released at the time of the test. Analyzing the doses that nearby residents received, the CDC team has made preliminary estimates of additional doses that the residents could have ingested in their bodies.

The test of a plutonium-based atomic device at the Trinity Site in southern New Mexico on July 16, 1945 was an undertaking unlike any that humankind had tried before. There was much uncertainty among the Los Alamos scientists, military personnel, and Manhattan Project officials assembled for the event as to whether the device would work and how, if it did work, it would affect the local environment. Some even feared the blast would ignite the atmosphere and cause worldwide destruction.

As part of the Los Alamos Historical Document Retrieval and Assessment project being led by the Centers for Disease Control and Prevention (CDC), an independent study team has collected information about the world’s first atomic explosion. While much information about the test has been documented in government reports, and some has been reported in books in the popular press, there has to date been no public accounting of the total radiation doses that local residents received from the cloud as it passed over, from radioactivity that fell onto the ground around them, and from contamination of their air, water, milk, and the foods that they ate. 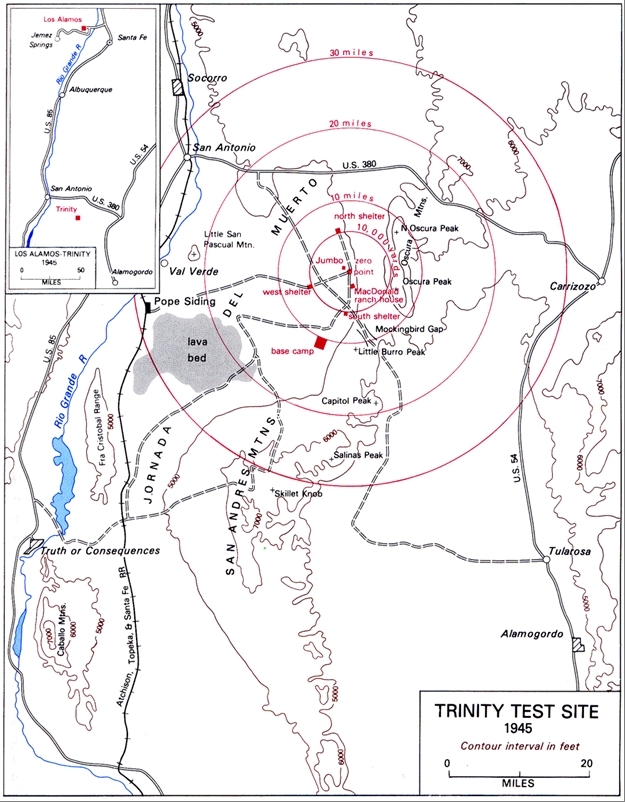 To avoid leaking the secret of the American atomic bomb project, local residents were not warned or evacuated in advance of, or following, the test. Numerous ranches existed in the area, some within 15 miles of “ground zero,” and commercial crops were grown in nearby regions. Several residences closest to the Trinity Site were not known to Army Intelligence officers who had mapped the area. The terrain and air flow patterns in the area caused a number of “hot spots” with particularly high radiation levels. Five monitoring teams traveled along local roads in the hours after the explosion and recorded their findings, but portable instruments were very crude at the time.

The highest radiation levels from the Trinity Test were measured in a swath 12 miles long and one mile wide that started near an area known as White Store, about 16 miles northeast of “ground zero,” and stretched across Chupadera Mesa. Around nearby ranches, exposure rates around 15 Roentgen per hour were measured just over three hours after detonation. Fallout was measured as far away as Indiana. As a point of reference, the Nuclear Regulatory Commission currently states that members of the public should receive less than 2 millirem (approximately 0.002 Roentgen) in any one hour from external radiation sources in any public area. Exposure rates measured after the Trinity test exceeded this level by more than a factor of 10,000. 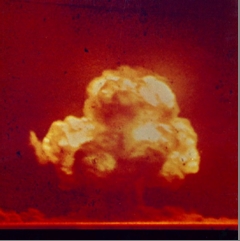 The only color photograph available for the Trinity blast, taken by Los Alamos scientist and amateur photographer Jack Aeby from near Base Camp. As Aeby later said, "It was there so I shot it."

In the 1940s, government officials had limited knowledge of the dangers of that would come from the radiation of a nuclear explosion, leading them to decide against an evacuation of the immediate area for secrecy reasons. As a result, people in the surrounding areas were exposed to radiation by breathing contaminated air and drinking contaminated water and goats’ milk.

During their presentation at the Health Physics Society meeting on Wednesday morning, July 11, the CDC team reported that ingestion of radioactive materials, primarily from rain water collected in cisterns and that found in goat’s milk, may have been a noteworthy contributor to public radiation dose and largely was not accounted for.

Reconstructed dose data will be reported this week at a meeting in New Mexico.