Enthusiastic observers were rewarded by a nice display of the Perseid meteor shower that was visible at its best in the night between 12 and 13 August 2007. We present glimpses of the spectacle and the scientific rewards of staying up all night.

The comet Swift-Tuttle orbits the Sun with a period of about 130 years. Whenever the comet comes close to the Sun in its orbit, it ejects a stream of dust particles, which are then distributed along its orbit. When the Earth passes through their path - a regular occurrence every August - we see a meteor shower, a fabulous spectacle for viewers on Earth. The last such ejection from Swift-Tuttle took place in 1992. 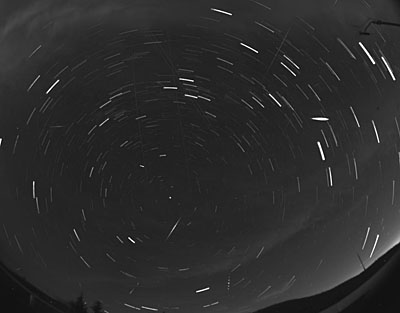 This image of the Perseid meteor shower was obtained in the night between 12 and 13 August 2007, when this recurrent summer phenomenon reached its intensity peak. The image was taken by ESA’s SPOSH camera during a 30-minute time frame, with 2-second exposures. Stars appear as describing arcs around the pole star. The pole star itself shows up as a point, as it is almost stationary during the exposure time. The meteors are visible as streaks crossing the path of the stars. Credits: ESA

Due to the relative orientation of the orbits of Earth and the comet, the meteor shower appears to originate from the constellation Perseus. This is why it is called the ‘Perseid’ meteor shower. As dust particles enter the atmosphere, they interact with it and generate light before they disappear.

The Meteor Research Group of ESA performed coordinated observations at several locations in Austria and Germany in collaboration with the German Aerospace Center (DLR) and three other participating institutes - The ‘Institut für Weltraumforschung’, Austria, the Technische Universität Berlin, Germany, and the Max Planck Institute for Solar System Research, Germany.

The orbits of the individual dust particles are similar to that of the parent comet Swift-Tuttle; however, they do not match exactly. Differences are introduced due to gravitational effects from planets and the influence of the Sun. Understanding these differences will shed light on the evolution of the dust particles in the Solar System, and on the ejection process of the particles at the comet.

The next scientifically interesting meteor display coming up is the Aurigid shower, a once-in-a-lifetime show originating from a long-period comet taking about 2000 years for each of its orbits around the Sun. The meteors from this comet reach us only every 70 years. It is expected to be visible from North America, Mexico, and Hawaii, with its peak on the morning of 3 September 2007.