Sucrose plays a vital role in coffee organoleptic quality. A team from CIRAD and the Agricultural Institute of Paraná in Brazil has recently identified the genes responsible for sucrose accumulation in coffee beans. This is a new step along the way to producing exceptional coffees. 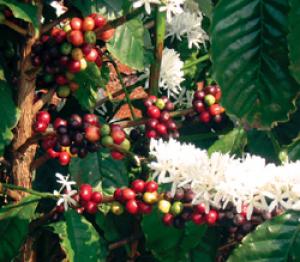 The sucrose accumulated in the beans is one of the organoleptic compounds in coffee. (Photo Credit: Pierre Marraccini, CIRAD)

To maintain their incomes, growers are increasingly banking on producing quality coffee. However, improving coffee beverage quality means knowing more about the biological processes - flowering, fruit ripening, etc - that determine end product characteristics. Some compounds (sugars, fats, caffeine, etc) are known to play a role in coffee quality. Their accumulation in the plant, and particularly in the beans, is a determining factor. Sucrose is considered to play a crucial role in coffee organoleptic quality, since its breakdown during roasting releases several aroma and flavour precursors.

Since 2001, CIRAD and the Agricultural Institute of Paraná in Brazil (IAPAR) have been working on joint research into how coffee beans ripen. They have characterized the key enzymes in the sucrose metabolism during coffee bean development. The researchers involved used molecular biology and biochemistry techniques in their work, supported by the University of Campinas in Brazil (Unicamp).

Their work showed that an enzyme, sucrose synthetase, is responsible for sucrose accumulation in coffee (Coffea arabica) beans. Unlike in other plants, invertases play only a minor role in this metabolism. Sucrose synthetase exists in the form of at least two similar proteins with the same biological function - isoforms -, but which are coded by two different genes: SUS1 and SUS2.

Expression of those genes was analysed within the various tissues of developing coffee beans (pulp, perisperm and endosperm). The results showed that sucrose accumulation in coffee beans, towards the end of ripening and just before picking, is controlled by isoform SUS2. Isoform SUS1, for its part, seems to be involved in sucrose breakdown and thus in energy production. In effect, its expression is systematically detected during the early stages of cell division and expansion in young tissues.

A second phase comprised a study of the nucleotidic diversity of these genes, so as to account for the variations in bean sucrose content between the various Coffea species or within the same species. The genes were mapped and tested to determine their role in that variability. The aim was to identify early markers of sucrose content that would guarantee end product quality.

The first application of these results was a study of the relations between shading, which is known to improve coffee quality, and sucrose metabolism enzymes. To this end, IAPAR set up a field trial. The results showed that sucrose synthetase and sucrose phosphate synthetase, another enzyme in the sucrose metabolism, show greater enzymatic activity in the beans of coffee trees grown in the shade than in those grown in full sunlight. In the case of sucrose synthetase, this activity is correlated with the increase in SUS2 gene expression seen in the beans of shaded plants. However, the final sucrose content of the beans is not higher for shaded plants. The quality of shaded coffee may thus result from the reorientation of the sugar metabolism towards the synthesis of other compounds, such as fats, which may also be involved.

Note: This article has been adapted from a news release issued by CIRAD.