High-resolution images that reveal unexpected details of the Earth's internal structure are among the results reported by MIT and Purdue scientists in the March 30 issue of Science.

The researchers adapted technology developed for near-surface exploration of reservoirs of oil and gas to image the core-mantle boundary some 2,900 kilometers, or 1,800 miles, beneath Central and North America. 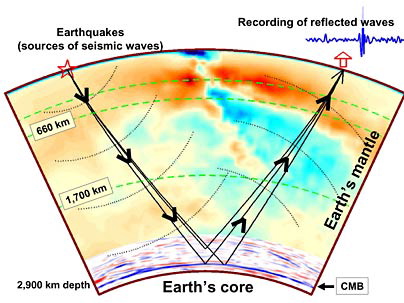 Seismic waves from earthquakes penetrate the Earth's mantle and scatter back at the core-mantle boundary to detectors on the surface. Nearly 100,000 such recordings are used to illuminate the planet's deep internal structures. Image courtesy / Robert van der Hilst, MIT

"Rather than depth, it's the resolution and lateral scale that are unique in this work," said lead author Rob van der Hilst, professor of earth, atmospheric and planetary sciences (EAPS) and director of MIT's Earth Resources Laboratory. "This could lead to a new era in seismology and all the other deep Earth sciences. In addition, our new expertise may be able to improve how we look for oil in or beneath geologically complex structures such as the Gulf of Mexico salt domes," he said.

The technique-akin to medical imaging such as ultrasounds and CAT scans-led to detailed new images of the boundary between the Earth's core and mantle. These images, in turn, help researchers better understand how and where the Earth's internal heat is produced and how it is transported to the surface. They also provide insight into the Earth's giant heat engine-a constant cycle of heat production, heat transfer and cooling.

The Earth is made up of the outermost rocky crust, which is around 40 kilometers deep; iron and magnesium silicates of the upper and lower mantles; and the liquid outer core and solid inner core.

Scientists have long assumed that the lower mantle is relatively featureless. But more detailed views have indicated that there is more complexity than expected. "I expect that the Earth is full of such surprises, and with these new imaging technologies and data sets, we have only just begun to scratch the surface of possibilities afforded by modern data sets," van der Hilst said.

Deeply propagating waves generated by large earthquakes hit the core-mantle boundary and bounce back-as if from a mirror-to the Earth's surface.

Each time one of these waves hits an underground structure, it emits a weak signal. "With enough data, we can detect and interpret this signal," van der Hilst said. Using data from thousands of earthquakes recorded at more than 1,000 seismic observatories, an interdisciplinary team of earth scientists and mineral physicists led by van der Hilst pinpointed the details of deep earth structures. The cross-disciplinary study involved seismologists, mathematicians, statisticians and mineral physicists from the University of Illinois and Colorado School of Mines in addition to MIT and Purdue.

The imaging technique was introduced 20 years ago as a powerful tool for finding subsurface reservoirs of gas or oil. Meanwhile, over the past decades, large arrays of seismometers have been installed at many places in the world for research on earthquakes and the Earth's interior. "It is now possible to begin applying techniques developed by the oil industry to these large earthquake databases," van der Hilst said.

The idea for the research reported in Science was born over breakfast in a Cambridge, Mass., Au Bon Pain some five years ago, when Maarten de Hoop, an applied mathematician at Purdue University, and van der Hilst realized that they might be able to pair up the industry tools and the earthquake data to study the core-mantle boundary in ways never before possible.

Years of work by Ping Wang, EAPS graduate student at MIT, led to the possibility for high-resolution imaging, and in collaboration with EAPS mineral physicist Dan Shim, the team produced maps of temperature and heat flow some 3,000 kilometers below the Earth's surface, using the data to provide a kind of "seismothermometer" of the Earth's temperature at extreme depths.

No one has ever seen the turbulently swirling liquid iron of the outer core meeting the silicate rock of the mantle-10 times as far below ground as the International Space Station is above-but the cross-disciplinary study led the researchers to estimate the temperature there is a white-hot 3,700 degrees Celsius.

Because of rich data available for the region between Central and North America, the researchers used this area as their first application of the tools, mapping millions of square kilometers underground. They hope to apply the techniques around the globe and perhaps to image an even more remote boundary of the inner core close to the center of the Earth.