The first draft of the horse genome sequence has been deposited in public databases and is freely available for use by biomedical and veterinary researchers around the globe, leaders of the international Horse Genome Sequencing Project announced today. 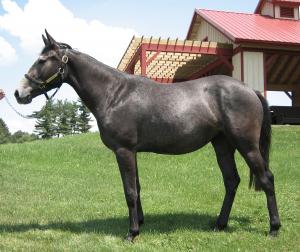 Photo of Twilight the horse. NHGRI-supported researchers have sequenced the genome of this Thoroughbred mare from Cornell University in Ithaca, N.Y. (Courtesy of Doug Antzak, Baker Institute for Animal Health, College of Veterinary Medicine, Cornell University)

The $15 million effort to sequence the approximately 2.7 billion DNA base pairs in the genome of the horse (Equus caballus) was funded by the National Human Genome Research Institute (NHGRI), one of the National Institutes of Health (NIH). A team led by Kerstin Lindblad-Toh, Ph.D., at the Eli and Edythe L. Broad Institute of the Massachusetts Institute of Technology and Harvard University, in Cambridge, Mass., carried out the sequencing and assembly of the horse genome.

Approximately 300,000 Bacterial Artificial Chromosome (BAC) end sequences, which provide continuity when assembling a large genome sequence, were contributed to the horse sequencing project by Ottmar Distl, D.V.M., Ph.D. and Tosso Leeb, Ph.D., from the University of Veterinary Medicine, in Hanover, Germany and Helmut Blöcker, Ph.D., from the Helmholtz Centre for Infection Research in Braunschweig, Germany. Production of the BAC end sequences was funded by the Volkswagen Foundation and the State of Lower Saxony.

Sequencing of the domestic horse genome began in 2006, building upon a 10-year collaborative effort among an international group of scientists to use genomics to address important health issues for equines, known as the Horse Genome Project (http://www.uky.edu/Ag/Horsemap/).

The horse whose DNA was used in the sequencing effort is a Thoroughbred mare named Twilight from Cornell University in Ithaca, N.Y. Researchers obtained the DNA from a small sample of the animal's blood. Twilight is stabled at the McConville Barn, Baker Institute for Animal Health, College of Veterinary Medicine, at Cornell University, with a small herd of horses that have been selected and bred for more than 25 years to study the mechanisms that prevent maternal immunological recognition and destruction of the developing fetus during mammalian pregnancy. The research, conducted by Cornell professor Doug Antczak, V.M.D, Ph.D., and funded by the National Institute of Child Health and Human Development, has implications in reproduction, clinical organ transplantation and immune regulation.

In addition to sequencing the horse genome, researchers produced a map of horse genetic variation using DNA samples from a variety of modern and ancestral breeds, including the Akel Teke, Andalusian, Arabian, Icelandic, Quarter, Standardbred and Thoroughbred. This map, comprised of 1 million signposts of variation called single nucleotide polymorphisms, or SNPs, will provide scientists with a genome-wide view of genetic variability in horses and help them identify the genetic contributions to physical and behavioral differences, as well as to disease susceptibility. There are more than 80 known genetic conditions in horses that are genetically similar to disorders seen in humans, including musculoskeletal, neuromuscular, cardiovascular and respiratory diseases. The SNPs are available at the Broad Institute web site (http://www.broad.mit.edu/mammals/horse/snp) and will be available shortly from NCBI's Single Nucleotide Polymorphism database, dbSNP (http://www.ncbi.nlm.nih.gov/SNP).

The initial sequencing assembly is based on 6.8-fold coverage of the horse genome, which means, on average, each base pair has been sequenced almost seven times over. Researchers can access the horse genome sequence data through the following public databases: GenBank (http://www.ncbi.nih.gov/Genbank) at NIH's National Center for Biotechnology Information (NCBI); NCBI's Map Viewer (http://www.ncbi.nlm.nih.gov); UCSC Genome Browser (http://www.genome.gucsc.edu) at the University of California at Santa Cruz; and the Ensembl Genome Browser (http://www.ensembl.org) at the Wellcome Trust Sanger Institute in Cambridge, England. The data is also available from the Broad Institute Web site (http://www.broad.mit.edu/ftp/pub/assemblies/mammals/horse/).

Over the next several months, researchers plan to further improve the accuracy of the horse genome sequence and expect to deposit an even higher resolution assembly in public databases. Comparing the horse and human genomes will help medical researchers learn more about the human genome and will also serve as a tool for veterinary researchers to better understand the diseases that affect equines. A publication analyzing the horse genome sequence and its implications for horse population genetics is being planned for the future.

NHGRI is one of the 27 institutes and centers at the National Institutes of Health, an agency of the Department of Health and Human Services (DHHS). Additional information about NHGRI can be found at its Web site, http://www.genome.gov.

The National Institutes of Health (NIH) - The Nation's Medical Research Agency - includes 27 Institutes and Centers and is a component of the U. S. Department of Health and Human Services. It is the primary federal agency for conducting and supporting basic, clinical, and translational medical research, and it investigates the causes, treatments, and cures for both common and rare diseases. For more information about NIH and its programs, visit http://www.nih.gov.

Note: This article has been adapted from a news release issued by NIH/National Human Genome Research Institute.