Many human proteins are not as good as they might be because the gene sequences that code for them have a double role which slows down the rate at which they evolve, according to new research published in PLoS Biology.

By tweaking these dual role regions, scientists could develop gene therapy techniques that produce proteins that are even better than those found in nature, and could one day be used to help people recover from genetic disorders.

The stretch of DNA which codes for a specific protein is often interrupted by sections of apparently useless DNA – known as introns – which need to be edited out in order to produce a new protein. 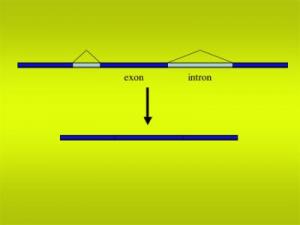 Before a transcribed gene is translated into the amino acids of its encoded protein, noncoding intron sequences are removed and the remaining coding exons are spliced together. (Credit: Hurst et al. / PLoS Biology)

Recently it has been discovered that some of the instructions on where to splice and re-splice the DNA in this editing process are contained in the coding section, or exon, of the DNA itself.

So, as well as spelling out which amino acids are needed to produce a specific protein, the part of the exon immediately next to the intron contains information that is essential for the gene editing process.

This means that these parts of genes evolve particularly slowly, making the proteins they encode for not as good as they could be had evolutionary processes been more able to improve them over time.

“Our research suggests that a gene with many exons would evolve at under half the rate of the same one that had no introns, simply owing to the need to specify where to remove introns,” said Professor Laurence Hurst from the University of Bath (UK), who worked with colleagues from the University of Lausanne (Switzerland) on the project.

“This is one of the strongest predictors of rates of protein evolution known, indicating that this dual coding role is vastly more influential than previously believed.”

The finding could have major implications for medicine and the development of gene therapy techniques in which people with a defective gene are given the correct version.

“Our results suggest that we could make the replacement gene even better than the normal version,” said Professor Hurst, from the Department of Biology & Biochemistry at the University of Bath.

“We would just need to remove the introns and tweak the protein at the sites that were dual coding.

“We also found that genes that have lost their introns many millions of years ago evolve especially fast near where the introns once resided.

“This indicates that this tweaking of the dual role sections of genes is also what evolution does when introns are removed.”

The research was funded by the Biotechnology & Biological Sciences Research Council, the Swiss National Science Foundation and the Center for Integrative Genomics at the University of Lausanne.

Note: This article has been adapted from a news release issued by University of Bath.