Light has been shed on the dark parts of the Moon with experiments by University of Edinburgh researchers simulating billions of years of lunar evolution.

It is generally believed the Moon was created after an early, semi molten, Earth collided with a planet the size of Mars.

The collision was so great that the orbiting debris would have formed a so-called lunar magma ocean, or liquefied rock, up to several hundred kilometres deep that would have covered the Moon's surface.

Yet until now, it has remained a mystery as to how this magma ocean cooled and how the lunar landscape evolved into white highlands and dark valleys.

The dark lunar rocks are somewhat similar to dark volcanic rocks on the Earth, like those visited by tourists on the Canary Islands. 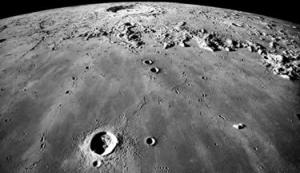 However, many dark lunar rocks are characterised by unusually high ratios of the rare elements hafnium to tungsten.

To better understand this, researchers created their own lunar rock based on analysis of samples bought back from Apollo missions, which they melted down in furnaces at temperatures of up to 1500 degrees Celsius.

They then examined it as it cooled and crystallised to understand how the Moon solidified into solid rock.

Dr Stephan Klemme, of the University's School of Geosciences, said:

“Looking at how minerals crystallised has enabled us to gain much greater insight into the moon's geological history.

“Our experiments have shown that the minerals creating the white rock - seen in the lunar highlands - would have crystallised first, whereas the dark and heavy iron-rich minerals would have sunk in the magma oceans creating darker rock that would have been buried deep inside the moon.

“The reason that the darker rocks are now visible on the surface of the Moon is proof of a later period of intensive meteorite showers. The iron-rich minerals, that were deep inside the Moon, proved to be especially high in Hafnium and low in Tungsten and would have erupted to the surface as molten rock filling the valleys on the Moon to leave the darker shade we observe today.”

Note: This article has been adapted from a news release issued by University of Edinburgh.