Railway sleepers made from waste plastic, including recycled bumper scrap and old computer cases could be putting in an appearance on UK railway tracks soon, writes Patrick Walter in Chemistry & Industry, the magazine of the SCI.

UK company Micron, which makes sleepers from waste polystyrene and polyethylene, has already approached UK rail track operator Network Rail with the aim of forming a partnership. Polystyrene is commonly used in disposable coffee cups, and polyethylene is more likely to be seen hanging from trees in the form of carrier bags. But the longevity of this plastic means that railway sleepers made using it can potentially last for centuries. This compares to a few decades for sleepers made from wood or concrete. 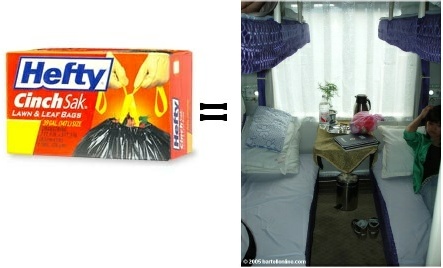 Wood and concrete also have other disadvantages. Concrete sleepers are very heavy and crack easily, and wooden sleepers require a lot of maintenance and chemical treatments to prevent them from rotting. In both cases, the sleepers have a lifetime of a few decades maximum. Stress tests have demonstrated that the plastic sleepers are at least as strong as concrete sleepers.

With the costs of maintaining the railway and underground systems spiraling, plastic sleepers therefore offer an affordable alternative. And they could help Network Rail hit its target of using 23% recycled material by 2012.

London Underground have considered using plastic sleepers in the past, but with old technologies, fire safety was an issue. This is no longer the case, however, as the new sleepers benefit from a high-tech fire retardant created to protect ammunition boxes for the US army.

Plastic sleepers have already been tested and approved in India, where Micron have a plant in production. Two US plants capable of producing more than 20 000 a month also have a production agreement with the company.