At a depth of 2900 kilometres, the layer between the Earth's mantle and its core has always intrigued geophysicists because they are unable to explain the seismic data it generates. Researchers in the Solid State Structure and Properties Laboratory (CNRS/Université Lille 1/Lille National School for Advanced Chemistry) have studied its deformation which influences convection movements within the mantle or even those by tectonic plates. Despite the inaccessibility of this layer and the extreme conditions which prevail, they have succeeded in modelling the defects responsible for its deformation. These results, obtained using a novel approach which combines numerical calculus and quantum mechanics, constitute the first step towards modelling deformation of this layer and its effects on the mantle. They are published in the March 1st, 2007 issue of Nature. 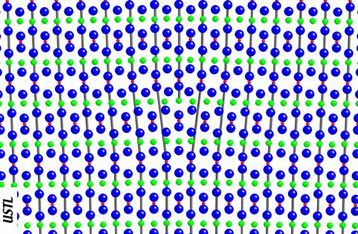 Model of a dislocation in the post-perovskite phase of the D" layer. This type of dislocation is responsible for the deformation of this layer, affecting convection movements within the mantle perceived via plate tectonics. © Patrick Cordier - CNRS 2007

Direct access to the Earth's interior is impossible: even the deepest bore holes are only scratches on the surface. Our knowledge of the Earth's interior comes from studying the seismic waves which propagate through the Earth from the focus of an earthquake. We know today that the Earth is divided into layers. The crust on which we live only represents a thin skin. The main shell is called the mantle, a layer made up of solid rock which extends to a depth of up to 2900 kilometres. It surrounds the liquid core which in turn shields the solid core, with a radius of 1200 kilometres. The interface between the mantle and the core, called the D" layer, has long intrigued geophysicists because they are unable to explain the seismic data it generates.

From a mineralogical point of view, 80% of the terrestrial mantle is made up of a silicate (MgSiO3) with a crystalline, perovskite structure. This mineral accounts for half of the Earth's mass. In 2004, several teams (notably from Japan) showed that perovskite became unstable near the core-mantle interface to form a new phase, or post-perovskite. Could post-perovskite deformation explain the seismic signature of the D" layer?

Patrick Cordier and his colleagues based themselves on this hypothesis. But how could a crystalline solid be deformed? The answer lies at the atomic scale: the crystals contain defects called dislocations, which are responsible for plastic deformation. Although their structure is relatively well understood in simple materials such as certain metals (copper, aluminium, etc.), the scientists had little knowledge of the structure of dislocations in complex materials such as minerals, particularly under extreme conditions of pressure. The team in Lille employed a novel approach: instead of reproducing the conditions prevailing inside the Earth in the laboratory, they used a simulation method by injecting the results of quantum mechanics into a numerical model to render it simpler. They are the first to have thus modelled dislocations at the atomic scale for complex materials under extremely high pressure.

The dislocations of which we now know the structure move within the crystal and interact between each other. Scientists thus have access to calculation codes which allow them to describe these interactions. They now want to clarify the behaviour of each grain of crystalline matter, then of the rock and beyond that, of the mantle. A dream? Maybe not. The advances achieved in recent years allow us to be optimistic. So perhaps our voyage to the centre of the Earth will be numerical.