No Magic Tomato? Study Breaks Link Between Lycopene And Prostate Cancer Prevention
By News Staff | May 17th 2007 07:10 AM | Print | E-mail

Tomatoes might be nutritious and tasty, but don’t count on them to prevent prostate cancer. In the May issue of Cancer Epidemiology, Biomarkers & Prevention, researchers based at the National Cancer Institute and Fred Hutchinson Cancer Research Center report that lycopene, an antioxidant predominately found in tomatoes, does not effectively prevent prostate cancer. In fact, the researchers noted an association between beta-carotene, an antioxidant related to lycopene, and an increased risk for aggressive prostate cancer. 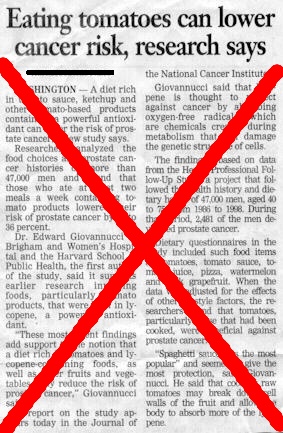 Not so fast, AP

According to the researchers, the study is one of the largest to evaluate the role of blood concentrations of lycopene and other carotenoid antioxidants in preventing prostate cancer. Study data were derived from over 28,000 men enrolled in the Prostate, Lung, Colorectal, and Ovarian (PLCO) Cancer Screening Trial, an ongoing, randomized National Cancer Institute trial to evaluate cancer screening methods and to investigate early markers of cancer.

"It is disappointing, since lycopene might have offered a simple and inexpensive way to lower prostate cancer risk for men concerned about this common disease," said Ulrike Peters, Ph.D., M.P.H., of the Fred Hutchinson Cancer Research Center. "Unfortunately, this easy answer just does not work."

Previous studies suggested that a diet rich in lycopene protected against prostate cancer, spurring commercial and public interest in the antioxidant. Antioxidants protect against free radicals, highly reactive atoms and molecules that can damage DNA and other important molecules in the cell. Since free radical damage increases with age, there has been a long-held suspicion in the scientific community that free radical damage could increase the risk of prostate cancer, a disease that has been clearly associated with age.

Subsequent studies of the potentially protective role of lycopene have been contradictory or inconclusive, according to Peters. In a 2006 study, she and her colleagues looked at the dietary intake of more than 25 tomato-based foods, also using data from the PLCO trial, and found no overall association between lycopene intake and prostate cancer.

In their current study, the researchers followed over 28,000 men between the ages of 55 and 74, enrolled in the PLCO Trial, with no history of prostate cancer. The men were initially screened through a PSA test and digital rectal exam, and were then followed through routine exams and screenings until first occurrence of prostate cancer, death or the end of the trial in 2001. At the beginning of the trial, the men gave a blood sample and completed a questionnaire related to their health, diet and lifestyle.

The researchers focused on non-Hispanic Caucasian men, as the small number of cases among other ethnic groups was statistically insignificant. They found no significant difference between those who had prostate cancer and those who did not in relation to the concentration of lycopene in their bloodstream. "Our results do not offer support for the benefits of lycopene against prostate cancer," Peters said.

Most surprisingly, says Peters, was the relationship between increased risk of aggressive prostate cancer – defined as disease that has spread beyond the prostate – and beta-carotene, another antioxidant found in many vegetables and commonly used as a dietary supplement.

This unexpected observation "may be due to chance, however beta carotene is already known to increase risk of lung cancer and cardiovascular disease in smokers," Peters said.

"While it would be counter-productive to advise people against eating carrots and leafy vegetables, I would say to be cautious about taking beta carotene supplements, particularly at high doses, and consult a physician," Peters said.