The double sunset that Luke Skywalker gazed upon in the film "Star Wars" might not be a fantasy.

Astronomers using NASA's Spitzer Space Telescope have observed that planetary systems – dusty disks of asteroids, comets and possibly planets – are at least as abundant in twin-star systems as they are in those, like our own, with only one star. Since more than half of all stars are twins, or binaries, the finding suggests the universe is packed with planets that have two suns. Sunsets on some of those worlds would resemble the ones on Luke Skywalker's planet, Tatooine, where two fiery balls dip below the horizon one by one. 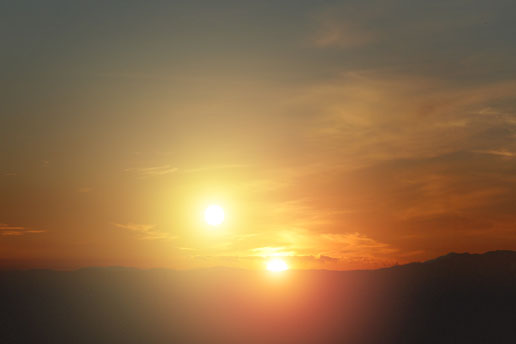 Our solitary sunsets here on Earth might not be all that common in the grand scheme of things. New observations from NASA's Spitzer Space Telescope have revealed that mature planetary systems -- dusty disks of asteroids, comets and possibly planets --are more frequent around close-knit twin, or binary, stars than single stars like our sun. Credit: NASA/JPL

"There appears to be no bias against having planetary system formation in binary systems," said David Trilling of the University of Arizona, Tucson, lead author of a new paper about the research appearing in the April 1 issue of the Astrophysical Journal. "There could be countless planets out there with two or more suns."

Previously, astronomers knew that planets could form in exceptionally wide binary systems, in which stars are 1,000 times farther apart than the distance between Earth and the sun, or 1,000 astronomical units. Of the approximately 200 planets discovered so far outside our solar system, about 50 orbit one member of a wide stellar duo.

The new Spitzer study focuses on binary stars that are a bit more snug, with separation distances between zero and 500 astronomical units. Until now, not much was known about whether the close proximity of stars like these might affect the growth of planets. Standard planet-hunting techniques generally don't work well with these stars, but, in 2005, a NASA-funded astronomer found evidence for a planet candidate in one such multiple-star system (http://www.jpl.nasa.gov/news/news.cfm?release=2005-115).

Trilling and his colleagues used Spitzer's infrared, heat-seeking eyes to look not for planets, but for dusty disks in double-star systems. These so-called debris disks are made up of asteroid-like bits of leftover rock that never made it into rocky planets. Their presence indicates that the process of building planets has occurred around a star, or stars, possibly resulting in intact, mature planets.

In the most comprehensive survey of its kind, the team looked for disks in 69 binary systems between about 50 and 200 light-years away from Earth. All of the stars are somewhat younger and more massive than our middle-aged sun. The data show that about 40 percent of the systems had disks, which is a bit higher than the frequency for a comparable sample of single stars. This means that planetary systems are at least as common around binary stars as they are around single stars.

In addition, the astronomers were shocked to find that disks were even more frequent (about 60 percent) around the tightest binaries in the study. These coziest of stellar companions are between zero and three astronomical units apart. Spitzer detected disks orbiting both members of the star pairs, rather than just one. Extra-tight star systems like these are where planets, if they are present, would experience Tatooine-like sunsets.

"We were very surprised to find that the tight group had more disks," said Trilling. "This could mean that planet formation favors tight binaries over single stars, but it could also mean tight binaries are just dustier. Future observations should provide a better answer."

The Spitzer data also reveal that not all binary systems are friendly places for planets to form. The telescope detected far fewer disks altogether in intermediately spaced binary systems, between three to 50 astronomical units apart. This implies that stars may have to be either very close to each other, or fairly far apart, for planets to arise.

"For a planet in a binary system, location is everything," said co-author Karl Stapelfeldt of NASA's Jet Propulsion Laboratory in Pasadena, Calif.

"Binary systems were largely ignored before," added Trilling. "They are more difficult to study, but they might be the most common sites for planet formation in our galaxy."

Other authors on the paper include: John Stansberry, George Rieke and Kate Su of the University of Arizona; Richard Gray of the Appalachian State University, Boone, N.C.; Chris Corbally of the Vatican Observatory, Tucson; Geoff Bryden, Andy Boden and Charles Beichman of JPL; and Christine Chen of the National Optical Astronomical Observatory, Tucson.

Written from a news release by NASA/JPL.