A robotic exoskeleton controlled by the wearer's own nervous system could help users regain limb function, which is encouraging news for people with partial nervous system impairment, say University of Michigan researchers.

The ankle exoskeleton developed at U-M was worn by healthy subjects to measure how the device affected ankle function. The U-M team has no plans to build a commercial exoskeleton, but their results suggest promising applications for rehabilitation and physical therapy, and a similar approach could be used by other groups who do build such technology. 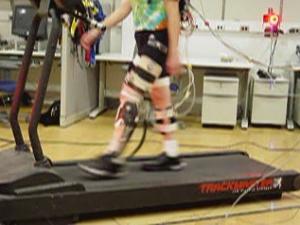 In the U-M device, electrodes were attached to the wearer's leg and those electrical signals received from the brain were translated into movement by the exoskeleton. (Image courtesy of University of Michigan)

"This could benefit stroke patients or patients with incomplete injuries of the spinal cord," said Daniel Ferris, associate professor in movement science at U-M. "For patients that can walk slowly, a brace like this may help them walk faster and more effectively."

Ferris and former U-M doctoral student Keith Gordon, who is now a post-doctoral fellow at the Rehabilitation Institute of Chicago, showed that the wearer of the U-M ankle exoskeleton could learn how to walk with the exoskeleton in about 30 minutes. Additionally, the wearer's nervous system retained the ability to control the exoskeleton three days later.

Electrical signals sent by the brain to our muscles tell them how to move. In people with spinal injuries or some neurological disorders, those electrical signals don't arrive full strength and are uncoordinated. In addition, patients are less able to keep track of exactly where and how their muscles move, which makes re-learning movement difficult.

Typically, robotic rehabilitative devices are worn by patients so that the limb is moved by the brace, which receives its instructions from a computer. Such devices use repetition to help force a movement pattern.

The U-M robotic exoskeleton works the opposite of these rehabilitation aids. In the U-M device, electrodes were attached to the wearer's leg and those electrical signals received from the brain were translated into movement by the exoskeleton.

Initially the wearer's gait was disrupted because the mechanical power added by the exoskeleton made the muscle stronger. However, in a relatively short time, the wearers adapted to the new strength and used their muscles less because the exoskeleton was doing more of the work. Their gait normalized after about 30 minutes.

The next step is to test the device on patients with impaired muscle function, Ferris said.

This work was supported by a grant from the National Institute of Neurological Disorders and Stroke.

Note: This article has been adapted from a news release issued by University of Michigan.