Scientists have used the world's largest robotic telescope to make the earliest-ever measurement of the optical polarisation* of a Gamma Ray Burst (GRB) just 203 seconds after the start of the cosmic explosion. This finding, which provides new insight into GRB physics, is published in Science today (15th March 2007).

The scientists from Liverpool John Moores University and colleagues in the UK, Italy, France and Slovenia used the Liverpool Telescope on the island of La Palma and its novel new polarimeter, RINGO, to perform the measurement following detection of the burst by NASA's Swift satellite. 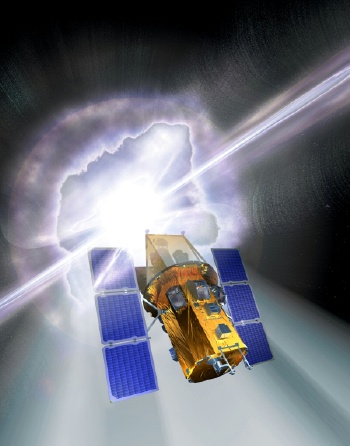 Gamma Ray Bursts are the most instantaneously powerful explosions in the Universe and are identified as brief, intense and completely unpredictable flashes of high energy gamma rays on the sky. They are thought to be produced by the death throes of a massive star and signal the birth of a new black hole or neutron star (magnetar) and ejection of an ultra-high speed jet of plasma. Until now, the composition of the ejected material has remained a mystery and, in particular the importance of magnetic fields has been hotly debated by GRB scientists.

The Liverpool measurement was obtained nearly 100 times faster than any previously published optical polarisation measurement for a GRB afterglow and answers some fundamental questions about the presence of magnetic fields.

Principal author of the Science paper and GRB team leader Dr Carole Mundell of the Astrophysics Research Institute, Liverpool John Moores University, said "Our new measurements, made shortly after the Gamma Ray Burst, show that the level of polarisation in the afterglow is very low. Combined with our knowledge of how the light from this explosion faded, this rules-out the presence of strong magnetic fields in the emitting material flowing out from the explosion - a key element of some theories of GRBs."

The so-called optical afterglow is thought to originate from light emitted when this ejected material impacts the gas surrounding the star. In the first few minutes after the initial burst of gamma rays, the optical light carries important clues to the origin of these catastrophic explosions; capturing this light at the earliest possible opportunity and measuring its properties is ideally suited to the capabilities of large robotic telescopes like the Liverpool Telescope.

Lord Martin Rees, Astronomer Royal and President of the Royal Society said "We are still flummoxed about the underlying 'trigger' for gamma ray bursts, and why they sometimes emit bright flashes of light. Theorists have a lot of tentative ideas, and these observations narrow down the range of options."

Professor Keith Mason, CEO of the Particle Physics and Astronomy Council (PPARC) and UK lead investigator on Swift’s Ultra Violet/Optical Telescope, said, "This result demonstrates well the effectiveness of Swift’s rapid response alert system, allowing robotic telescopes, such as the Liverpool Telescope, to follow up gamma ray bursts within seconds, furthering our knowledge with each detection."