A robotic therapy device may help people regain strength and normal use of affected hands long after a stroke, according to a University of California, Irvine study.

Stroke patients with impaired hand use reported improved ability to grasp and release objects after therapy sessions using the Hand-Wrist Assisting Robotic Device (HOWARD). Each patient had at least moderate residual weakness and reduced function of the right hand, although the affected hands were neither totally paralyzed nor unable to feel. Seven women and six men who had suffered a stroke at least three months prior participated in the pilot study using this robotic device. 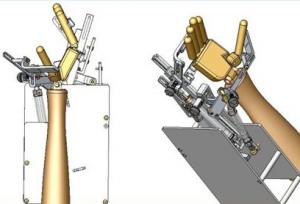 “Most spontaneous improvement in function occurs in the first three months after a stroke, and after that things tend to plateau,” said Dr. Steven C. Cramer, senior author of the study and associate professor in neurology, anatomy and neurobiology at UCI. “Robot-assisted therapy may help rewire the brain and make weak limbs move better long afterwards.”

Developed by UCI researchers, HOWARD aids patients as they grasp and release common objects. The robotic device wraps around the hand and couples with a computer program that directs patients though a physical therapy program. HOWARD users initiate hand motion, with the robot monitoring and assisting the activity in order to meet therapeutic goals.

“The HOWARD therapy isn’t passive; the patient has to jumpstart the program and initiate the motor command,” Cramer said. “But if the hand is weak and can only budge one-tenth of an inch, the robot helps to complete the task so the brain relearns what it’s like to make the full movement.”

In the UCI study, each patient, average age 63, received 15 two-hour therapy sessions, spread over three weeks, designed to improve their ability to grasp and release objects. All worked with HOWARD for the 15 sessions. For seven patients, HOWARD shaped and helped complete movements across all sessions, while six had complete support from HOWARD for only the second half of the sessions.

At the end of three weeks, all patients had improved in their ability to grasp and release objects. Their average score on an Action Research Arm Test – which measures the ability to perform such real-world tasks as grasping a block, gripping a drinking glass, pinching to pick up a small marble or ball bearing, and putting your hand on your head – improved by nearly 10 percent. And their average score rose by nearly 20 percent on the Box-and-Blocks Test, which assesses manual dexterity as one moves blocks from one side of a box to another in one minute.

The patients also developed a 17 percent greater range of motion in their hands and wrists and were rated as less disabled on a standard occupational therapy assessment tool called the Fugl-Meyer score.

“Assessing changes in before-and-after scores within each subject, these were highly significant gains after three weeks of therapy,” Cramer said.

The UCI team is now using what they learned from study participants to create a “son of HOWARD,” with improved hand-robot connections and more software options to individualize therapy and keep patients interested.

Stroke is a major cause of long-term disability in the United States. More than 700,000 Americans suffer strokes annually. Stroke is the third leading cause of death in the country. And stroke causes more serious long-term disabilities than any other disease. Nearly three-quarters of all strokes occur in people over the age of 65 and the risk of having a stroke more than doubles each decade after the age of 55, according to the National Institute of Neurological Disorders and Stroke.

Lucy Der-Yeghiaian, Jill See, Vu Le and Craig D. Takahashi are co-authors of the study, which was partly funded by a National Institutes of Health Institutional Training Grant.

Note: This story has been adapted from a news release issued by University of California - Irvine.