Sandia National Laboratories researchers Mark Ivey and Bernie Zak are members of a research team from around the world whose work on the cold tundra in northern Alaska is helping to transform scientists' understanding of what the future may hold for Earth's climate.

The team conducts research at the North Slope of Alaska east of Barrow along the coast of the Chukchi Sea. 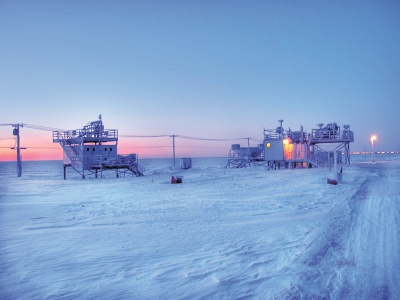 Sponsored by DOE's Office of Science and managed by its Office of Biological and Environmental Research, the Atmospheric Radiation Measurement (ARM) Climate Research Facility operates two research sites at the North Slope. The facility provides researchers with a rare, ground-based window into the cloud and radiative processes that take place in Earth's atmosphere at high latitudes. The research performed at the site has resulted as arguably being one of today's most successful atmospheric research programs.

The North Slope of Alaska will continue to serve as a center for atmospheric and ecological research activity during the International Polar Year 2007-2008, focusing on Arctic scientific activities, while scientists from the world over will focus research on both the Arctic and the Antarctic.

Climate researchers are focusing increased attention on high latitudes, as found at the site, as they work to better understand the interactions of the atmosphere-land-ocean system. The Arctic, specifically, is predicted to undergo more intense warming than any other region on Earth because water undergoes a specific seasonal phase change there. Scientific evidence indicates, in fact, that this warming is already happening.

“The arid cold during winter at the North Slope provides a ‘window’ into space. Under these conditions, infrared radiant energy can escape more easily through the atmosphere — it’s something that’s part of Earth’s natural energy balance,” says Zak, science liaison for the North Slope site. "This is one of the ways that high latitudes are quite different from temperate or tropical regions, and reinforces the importance of our research here.”

The value of these different regional factors is that the researchers have the chance to study how longwave energy gets trapped to varying degrees inside the atmosphere by different conditions from chemical constituents that include water vapor, carbon dioxide, methane, nitrous oxide, chlorofluorocarbons, and liquid water droplets that absorb the energy emitted by the surface of Earth.

This year is also the 50th anniversary of the International Geophysical Year (IGY), a similar international scientific effort that initiated a comprehensive series of global geophysical activities to span the period July 1957–December 1958.

The seeds of the present concern about global climate change were planted during the IGY. Prior to IGY, it was not known that the burning of fossil fuels was progressively changing the composition of the global atmosphere.

Written from a news release by DOE/Sandia National Laboratories.