A team of scientists from WWF and Conservation International (CI) has discovered the world’s largest known population of grey-shanked doucs (Pygathrix cinerea), increasing chances that the endangered monkey can be saved from extinction.

The grey-shanked douc is one of the world’s 25 most endangered primates and has only been recorded in the five central Vietnamese provinces of Quang Nam, Kon Tum, Quang Ngai, Binh Dinh, and Gia Lai. Fewer than 1,000 individuals are believed to still exist, and until now, only one other population with more than 100 animals was known. 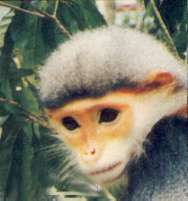 “This is an exciting and important discovery because of the large size of the population,” said Barney Long, Central Truong Son Conservation Landscape Coordinator for WWF Greater Mekong – Vietnam Program. “It’s very rare to discover a population of this size with such high numbers in a small area, especially for a species on the brink of extinction. This indicates that the population has not been impacted by hunting like all other known populations of the species.”

Recent surveys in Que Phuoc Commune in Quang Nam Province recorded at least 116 animals (the number of individuals observed), with an estimated population of over 180 individuals. To date, only a small part of the area has been surveyed, meaning significantly more doucs may live in the adjacent forest.

“To put it into a human perspective, this discovery is like finding a new country with over 1 billion people in it,” said Ben Rawson, a Regional Wildlife Biologist for CI’s Indo-Burma Program. “We now have a much greater opportunity to overcome the very serious threats faced by this species and prevent its disappearance from our planet.”

Grey-shanked doucs, first described in 1997, are tree-dwelling colobine monkeys with orange faces and tufts of whiskers. Like many primate species in Vietnam, they face an uncertain future due to hunting and habitat loss. A 2006 IUCN assessment determined that 65 percent of Vietnam’s primate taxa are Endangered or Critically Endangered, making the country one of the highest global priorities for primate conservation.

Tran Khanh Duong, who led the most recent surveys, was trained through CI’s Primate Conservation Training Course operated in collaboration with Hanoi University of Science, the University of Colorado-Boulder and the Frankfurt Zoological Society. He then received a small grant and mentoring to run the surveys, showing the impact on primate conservation and career development from such training and funding programs.

“When I gave up economics to pursue my passion for wildlife, I never dreamed that I would be able to make such an impact,” Duong said. “I look forward to continuing my work at the site to ensure that this population is protected.”

The doucs are located in the proposed “Central Quang Nam Species and Habitat Conservation Area”, which the Quang Nam Forest Protection Department (FPD) hopes will receive full legal protection by the Provincial People’s Committee. Establishment of this protected area will protect the globally important population of grey-shanked doucs, along with a herd of elephants that live in the lowland forests to the south.

Currently, the area is threatened by illegal logging and hunting, as well as the construction of a new road that would bisect the forest. A new management plan developed by Que Son FPD with WWF support that aims to protect the douc and elephant populations long into the future awaits final approval and financial support form the Provincial People’s Committee.

The surveys were funded by the U.S. Fish and Wildlife Service, WWF-US and the Margot Marsh Biodiversity Foundation. WWF has been supporting Quang Nam and adjacent provinces through its Central Truong Son Landscape Conservation Program for over six years and rangers from across Quang Nam and Thue Thien Hue provinces have been trained in primate surveying, monitoring, and conservation methods.