An international team of researchers has discovered that two types of plant proteins are at work in the transport of an important growth hormone, a finding that could have applications in creating plants with specific characteristics.

Previously thought to function independently, the two types of proteins were shown to comprise mechanisms that work both cooperatively and synergistically, depending upon their location in the plant. Together they control the movement of auxin, a hormone that, among other functions, regulates plant architecture, tissue development and flowering time. 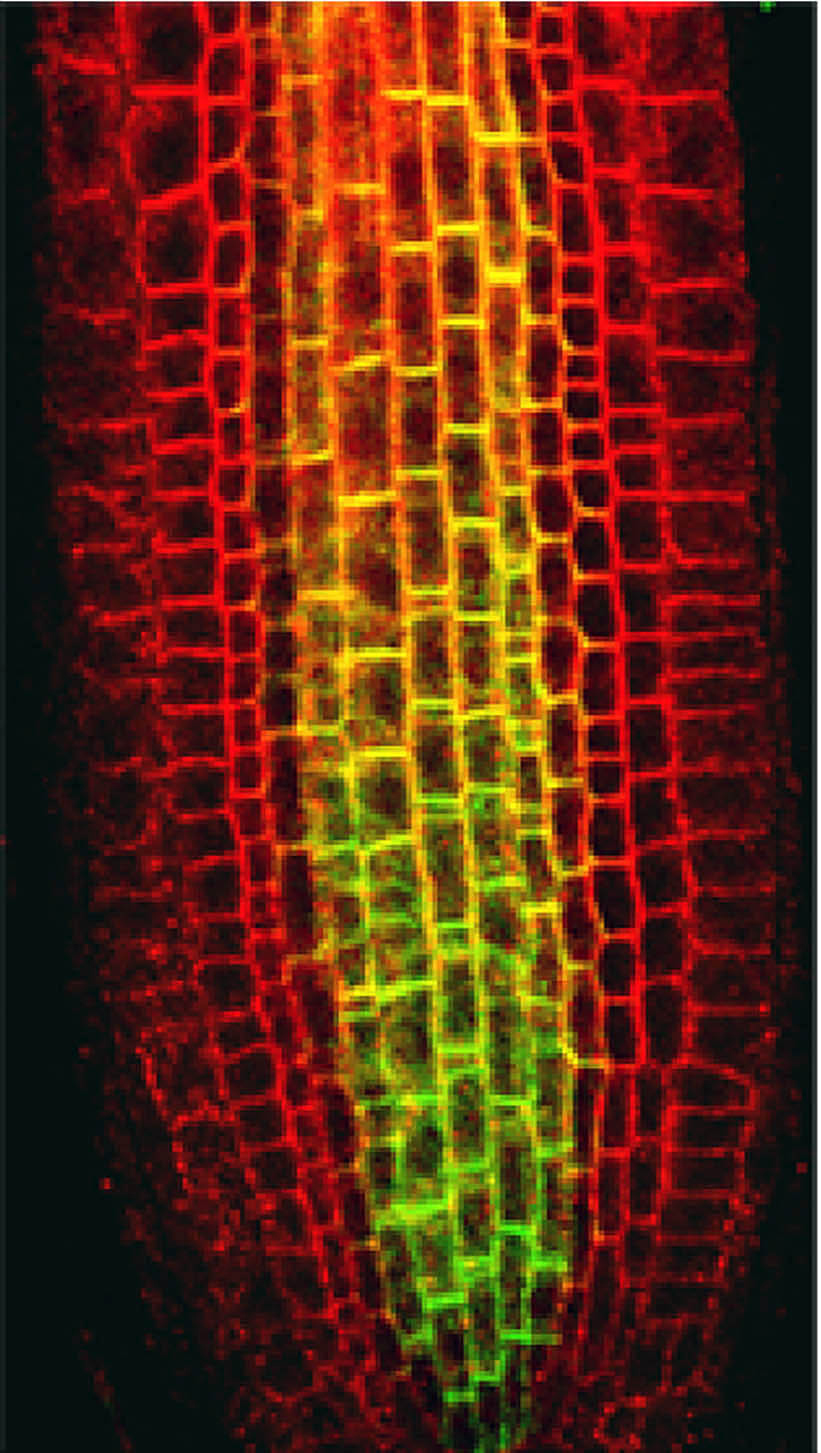 In this amplified image of a root tip, an imaging technique shows the two types of proteins that Murphy's team has described, which can work independently or cooperatively. The PGP proteins are red, the PIN proteins are green, and where they both occur and work together, the image appears yellow. These proteins can be altered to produce plants with bigger roots. Credit: Purdue University

The documentation of how these two mechanisms work together has direct applications in designing crops suitable for biofuel and ethanol production or for creating ornamentals with certain desirable traits, like developing more flowers.

"This is a major step in understanding auxin transport, which is vital to every aspect of plant growth and development," said Angus Murphy, the professor of horticulture and landscape architecture at Purdue University who led the team.

Murphy said results of the study, published last month in The Plant Cell, have already been applied and have been used to create plants with larger root structures.

"This study gives us another important tool in our toolbox," he said. "Before, we would modify plants one gene at a time, but now we realize why this approach has not worked very well. We now see that there are two elements of control to keep in mind, just as amplified sound is best controlled by modulating gain from the microphone and amplifier output to the speakers."

A first way in which the finding could be directly applied would be in developing crops with more usable biomass for the production of ethanol or other biofuels, which are renewable fuels derived from recently-living organisms like plants. Reengineering the complex cellular machinery of plants to increase biofuel yields requires alterations of their cell walls, which provide plants with much of their strength and rigidity. Altered plant architecture can help compensate for this weakness and enhance the production of tissue most suitable for biofuel feedstocks.

"Scientists will be able to use information from this study to better manipulate plant architecture using a combinatorial approach," Murphy said. "If you want more productive materials for biofuel production, architectural changes will be required to make it work. For example, when plastic body panels were invented for cars, they couldn't just replace the steel. The designers had to change the manner in which the panels were supported and attached to the frame. That is similar to how we have to think about the effects that modifications will have on the plant as a whole."

These transport proteins lie in a plant cell's exterior membrane where they coordinate movement of different substances into and out of the cell. Murphy's team found that the two transport proteins, called PINs and PGPs, work on their own or interactively depending upon the plant tissue involved. Multiple types of each protein also often work together in specific, tissue-dependent ways.
In the model plant Arabidopsis, there are eight PIN proteins and 21 PGPs. This provides nearly endless pairings to control the transport of auxin throughout the plants' various tissues, Murphy said.

The research also should have important implications in horticulture. For example, the team's findings might be used to produce ornamentals that do not need pruning or that have larger root systems to support more vegetation, he said. Such plants would require less labor, energy and - with larger roots - less fertilizer, Murphy said.

The team's findings could have applications in food crops, but Murphy said he hasn't pursued such work due to some concerns over eating genetically modified foods.

"We're focusing on biofuels and ornamentals because everybody loves to drive their car, and people don't eat their flowers," he said.

Murphy's research was funded by the National Science Foundation, U.S. Department of Agriculture, U.S. Department of Energy, and the Biotechnology and Biological Research Council of the United Kingdom. Cooperating educational facilities include the University of Tubingen, Germany; The Basel-Zurich Plant Science Center at the University of Zurich, Switzerland; and the RIKEN Plant Science Center in Kanagawa, Japan. Murphy continues to study auxin transport as well as the role and importance of individual PIN and PGP protein pairings.

Written from a news release by Purdue University.